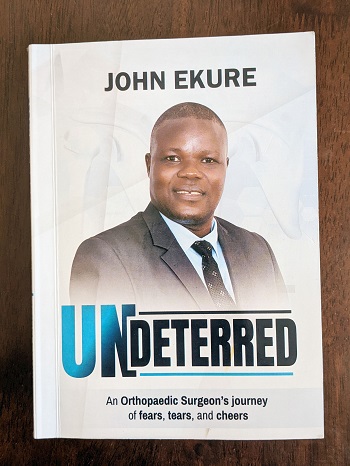 The story of Dr John Ekure, the founder and chief surgeon of Kumi Orthopaedic Center, is endearing as it is inspirational. It is a story of resilience, determination, discipline and passion. He faced many obstacles that would otherwise make another person easily give up in life.

If you ever visit Kumi and ask around about some of the inspirational landmarks in the area, you will never fail to hear about Kumi Orthopaedic Center.

The book highlights the story of the man behind the centre. The most amazing thing is that if he were not as stubborn and as daring as he is with his vision, quite easily, the hospital would not have been in existence, writes JONATHAN OCHOM.

While, until recently, the Iteso have not been major political actors on Uganda’s national scene, it is undeniable that post-independence Teso has generally been defined by several tragic events: armed rebellion, cattle rustling as well as natural disasters like floods and drought.

Books, scholarly articles, media stories and songs about Teso will be incomplete without reference to the sub-region’s tragedy, misery and suffering over the years. As a post-1986 Etesot, I grew up to stories of and amidst insurgency, Karimojong raids, government brutality, and famine. It was a life of hopelessness.

This is the context in which a recently published autobiography, Undeterred is set in. It chronicles the life and times of one of Uganda’s foremost orthopaedic surgeons, Dr John Ekure. Born in a polygamous family to an entrepreneurial father and a career mother (nurse) in 1970, the author recounts life in a typical Teso family: many children, communal work, livestock and crop production.

It is a family where children provided “a critical labour force” because “work was like religion.” In the contemporary era of population control, the book provides a strong counter narrative to the popular Eurocentric views on family planning, which largely demonise African notions around big families.

The book traces Ekure’s rural childhood in different parts of Teso characterised with insecurity, acute shortage of basic commodities and the unrest that dominated the region in the 1970s and 1980s.

The book takes the reader through Ekure’s academic pursuits punctuated by mobility in its formative stages due to his mother’s job, through to his life at university as well as his activism as a rookie medical practitioner for better pay for medical workers.

It details his brief stint at local politics which saw him openly supporting Reform Agenda’s Dr Kizza Besigye in the 2001 polls. An account of his life in public service is also a key feature of the book, as he demonstrates his attempts to reform administration, raise resources but ends up stepping on other people’s toes which puts his life in danger.

As expected, his stint in Kumi hospital comes to an acrimonious end due to intrigue. Undeterred highlights Dr Ekure’s painful experiences especially the loss of his mother which, painful as it was, changed his professional, political and general outlook to life.

The book further gives a sneak peek into his life as a medical entrepreneur running a private specialized hospital for bone and joint ailments, which he established to preserve the legacy of his mother who was a nurse.

Initially birthed out of the need to diversify his income streams but also raise more money for his then imminent wedding, the story of Kumi Orthopaedic Centre is inspirational and confirms the long-held notion that necessity is the mother of invention.

It fortifies the call for a diligent savings and investments culture for that rainy day which can befall any salaried person. The icing on the cake is the famous presidential phone call which solidified his confidence in his craft.

Undeterred is a story of transforming childhood adversity into a source of inspiration to improve the lives of others. Through Ekure’s story, the book sheds light on the typical struggles most families in Teso experienced after Uganda’s independence especially after Idi Amin and later Yoweri Museveni captured power, and the subsequent unrest that affected the sub-region.

While the reader may be tempted to thirst for further information about certain historical events, especially about the war in Teso, his work in Reform Agenda, among others, it is important to remember that the book is essentially about John Ekure - the person.

It is a compelling read which documents the life of a revered surgeon, a consummate philanthropist, a daring entreprenuer and practicing Christian who continues to impact the medical profession across the world and his community especially in Teso.

The book is written in first-person narrative which makes it easily relatable and digestible. It features a commentary and foreword from some outstanding Iteso and is arranged in 22 chapters with a pictorial at the end.