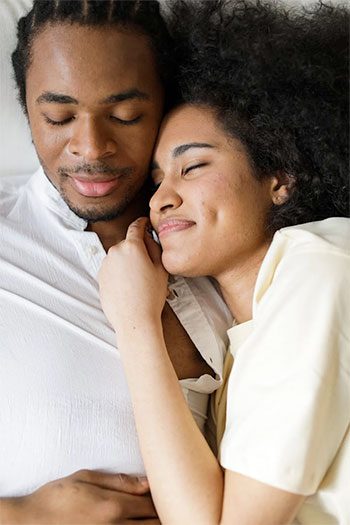 If your wife lately seems to be always angry and volatile emotionally, then it is time to change tact; maybe you have approached lovemaking the wrong way all these years, and she is at a point where she can no longer even fake it.

And even when she continues to fake it to stoke your ego, she cannot fake a good mood or do much about how irritable she increasingly feels. But you can actually help her, if Naomi Wolf and her research findings published in Vagina: A New Biography are to be believed. And as a woman, I can say with my full chest that what she writes makes a lot of sense.

From interviews with men that were once awful lovers that sought help and saved their marriages, she said a tantric approach (in other words, being more giving) to a woman’s desire is key to her feeling your attention, good vibe and affection.

One interviewee who boasted that he was now a wonderful lover said: “I transmit energy, love and affection in my touch without doing something necessarily sexual. It is the art of enjoying the moment rather than wanting to just ‘get it’. To hold and experience a connection, not to go in a programmed way…every man should learn the tantric approach at twenty.”

Some wives, after many years of bad sex, have started to approach those sacred spaces in their home with trepidation. They already know it is going to be bad, but it is something they, nonetheless, avail themselves for, because they made a vow.

If you surprise such a wife with a tantric approach for once, you will be shocked by how much she is willing to give you, for a change, and how much she unfurls from the tight, angry bud that you usually find in your bed. The tantric approach does that. It is men at their most seductive – by not being openly seductive.

What started as you noticing she changed her hairstyle and offering to oil her scalp as she sits between your knees can end in unexpected ways. You paid attention.

What started as you giving her an intimate grooming or non-sexual massage, because you recognised how hard she works, can deliver in ways you were not counting on.

“You are paying attention… you are not in your own world. How can you not be more successful?” the interviewee told Wolf.

And therein lies a woman’s good mood and emotional stability: great sex. She will glow, she will have a bounce in her step, she will laugh more often and genuinely, because you are helping her release and use her happy hormone (oxytocin).

But where a husband remains selfish and finds his sexual release and dose of oxytocin regularly without caring whether his wife is on board or not, the results are usually a mellow husband with a hen-pecker for a wife. More likely than not, you created her, ssebo.

The tantric approach is basically about touch, attention to detail, and allowing penetrative sex to be the organic outcome of all that, as opposed to going straight for your grand finale and working backwards to……what?

Some couples never touch each other at all, unless they are making love. They never hold hands, never hug, never do sweet, non-sexual things for each other and have settled into a one-sided boring routine when it is time for lovemaking. Recipe for disaster.

My dentist once told me the reason I had a terrible pain in my ear was because of a bad tooth. It made no sense to me that a bad tooth could redirect its pain elsewhere, and indeed when he dealt with the tooth, all the pain disappeared.

So it is with bad sex, especially when it comes to women who are mostly dependent on their spouses to help them to satisfaction. Wives left high and dry in their marital beds make for insufferable bosses both at home and the office, and are even nastier to their husbands.

In fact, a wife experiencing horrible sex is no better than the one who is not getting any at all. So, sir, kindly save the world by doing the needful!