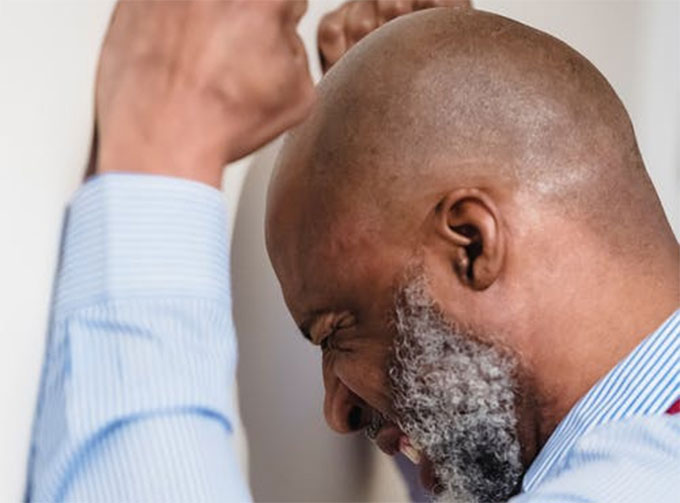 I tossed and turned all night, haunted by the memory of hitting Julie over and over again, and the terrified, broken look in her eyes.

Of course my anger was justified, but hitting her the way I had hit her was not, and I was racked by guilt and shame. Furthermore, I was worried about how badly I had hurt her; I had left her curled up on the floor of the apartment, what if she had been too hurt to get up?

Just how hard had I hit her? It all seemed kind of hazy now and I could not be sure, and that terrified me. What if I had gone too far?

I tried calling her first thing the next morning, locked up in the bathroom while Diane was still in bed, but she did not answer – what if she was too hurt to get to her phone?

There was no way I was going to be able to focus on work; so, rather than drive to work, I left the house earlier than usual and headed for the apartment.

When I got there, the front door was locked and I could not get my key in as hers had been left in the lock; so, that was a relief – at least she had been able to get up and lock the door after I left – all I had to worry about now, was getting her to open up and let me in.

For almost five minutes, I practically pounded on the door, repeatedly calling for her to open up, in the process earning the curious glances of other tenants as they left for work, and I was just about to give up and come up with an alternative plan when I finally heard the key turn in the lock.

The next morning, every bit of my body felt sore and swollen and I winced as I gingerly got up to feed Junior. Even lifting him out of his crib was painful and I actually yelped, when in his excitement at being picked up, he accidentally kicked me in the stomach where from the sharp pain this caused, one of David’s kicks had probably landed the previous night.

I was feeding him in the living room, when the front door handle suddenly rattled and seconds later I heard David calling out my name, while banging on the door.

I froze, every cell of my being on edge, and felt pure terror course through me; what did he want? Was he back to pick up from where he left off yesterday?

The fear paralyzed me and I did not move, while silently praying he would give up and go away, but when the pounding and calling only got louder and more urgent, it was evident he was not about to do so; and so, I finally stood up and slowly walked to the door, tightly holding Junior close to me, with the hope that he would not attack me while I had our son in my arms.

I had not looked in the mirror when I woke up, afraid of what I would see, but as soon as I opened the door and saw David’s expression immediately switch from impatient and irritated to shocked and horrified, I knew I probably looked as bad as I feared, and his exclaimed, “My goodness Julie, I’m so sorry,” only confirmed it.

“Just tell me why, that’s all I want to know; why, David?” I answered brokenly.

“You lied to me! I asked you if you had slept with that doctor, and you looked me in the eye and swore you hadn’t!”

“That wasn’t a lie! I haven’t!”
“He spent the night, Julie! Diane saw him leaving in the morning, and told me how up close and personal you two looked, and how he was carrying Junior like he was his father.”

“What! That’s what all this is about? What your wife claims she saw! I should have known she was behind this!” I exclaimed angrily.

The next morning, David was up earlier than usual, which was not really surprising since he had spent most of the night tossing and turning.

I noticed that he took his phone to the bathroom with him when he went to shower, and was sure he was going to call his wh**e; so, I pretended to be asleep with the hope that he would let his guard down and I would be able to eavesdrop on their conversation.

However, no matter how much I strained to hear something, I did not, and it was soon evident that if he was talking to her, it was through text, which was very frustrating, as it meant I no longer knew what was going on between them.

When he came out of the bathroom, he seemed to be in an even bigger hurry to get going, not even staying for his usual cup of coffee, simply getting dressed, then picking up his keys and claiming he needed to go and do some prep for an early morning meeting at the office.

I did not believe him for a minute, certain that if he did indeed have an early morning meeting, it was at the apartment, not the office. I did not give any sign of my suspicions, kissing him goodbye and wishing him a good day at work as usual.

However, the minute he left, I jumped out of bed and dashed into the bathroom, anxious to get ready and out of the house as fast as he had; I was pretty sure David had gone to the apartment, but I needed to prove that for myself, before I could come up with a plan on how to proceed.

Half an hour after he left, I was out of the house as well, cursing the bumper-to-bumper morning traffic as I made my way to the apartment at a snail’s pace.