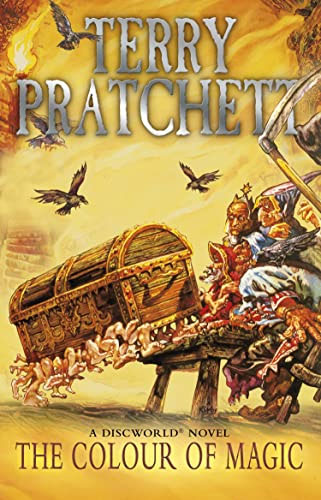 We recently discussed some of the older books you should read in the new year. Every novel I mentioned is a classic for a reason, and I have more.

I noticed that I forgot to add Harry Potter to the previous list. I suppose Harry Potter is as obvious a recommendation as Lord of the Rings. J.K. Rowling turned millions of children into diehard fantasy fanatics when she published The Philosopher’s Stone in the 1990s. You should read book one to see if this series deserves the hype.

The protagonist is a 13-year-old boy from an abusive environment that discovers his wizarding roots. If you read and loved Harry Potter because of the magic and whimsy, give The Color of Magic by Terry Pratchett a go. Pratchett is the reigning emperor of all things magical and whimsical. His stories unravel in a world sitting on the backs of four elephants.

The author’s absurd humour is a breath of fresh air in an era obsessed with grimdark. Some readers would typically recommend American Gods by Neil Gaiman, but Stardust is far better. Hollywood turned this magical novel into a live-action movie in 2007, but you should read the book to get a better sense of Gaiman’s style.

In fact, if you want to explore the fantasy genre alongside your children, nieces, and nephews, I would also recommend His Dark Materials by Philip Pullman. The series is set in a world where humans have spirit companions called daemons that take animal form. The novels have that whimsical quality that makes Harry Potter so appealing.

Every page you crack open is a portal that threatens to blur your perception of reality. You’re so immersed in Lyra Belacqua’s story that you feel like you could reach out and touch her world. The books are short enough to hold the attention of children and dark enough to keep adults engaged.

But what if you prefer the sort of epic tale that takes you months, possibly even years, to finish, but you have had your fill of Lord of the Rings and Malazan? What if you’re looking to lose yourself in a long and arduous adventure that will shape your appreciation and understanding of the fantasy genre for years to come?

Wheel of Time by Robert Jordan is the answer to your prayers. The series features those age-old conflicts between good and evil you expect in older fantasy. Jordan was a massive Tolkien fan, which is why the first book is a little off-putting for anyone who routinely reads Lord of the Rings.

The author admitted that he tried to recreate Tolkien’s style in the first few chapters. But eventually, Jordan found his voice. The result is a massive 14-book saga with a giant cast. Jordan died before the series ended. But Brandon Sanderson did an impressive job of finishing the story.

Admittedly, like Malazan, Wheel of Time is a complex undertaking because you have 14 incredibly thick volumes to read. If you want to start your fantasy journey on a lighter note, try The Broken Empire by Mark Lawrence. Mark Lawrence and Joe Abercrombie sit on the twin thrones of the grimdark fantasy subgenre. But Lawrence tells simpler stories with a smaller cast and a faster pace.

They are much easier to consume but just as emotionally taxing. The protagonist of The Broken Empire tests your patience because any other series would cast him as the villain. But in Lawrence’s world, Jorg is one mildly corrupt soul in a sea of evil.

The Broken Empire is also a breath of fresh air because it takes a somewhat balanced approach to grimdark. I haven’t even mentioned The Farseer Trilogy by Robin Hobb. But we can talk about her another time.