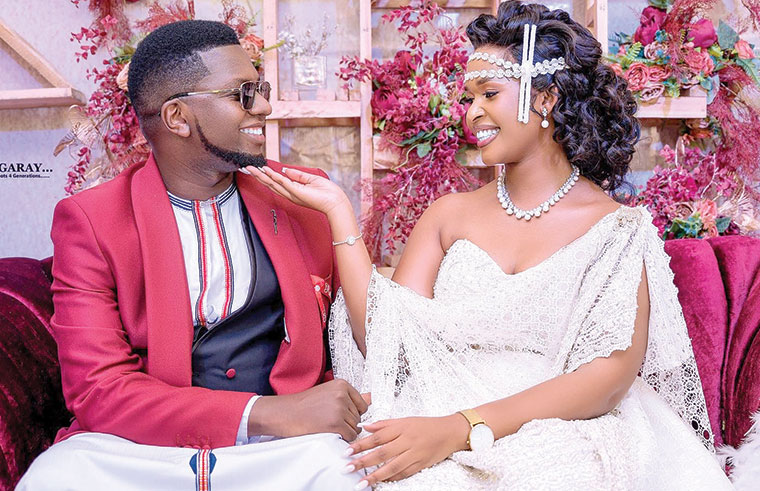 Makindye East member of parliament Derrick Nyeko is what one would describe as the epitome of unity in Uganda’s ethnic diversity.

Recently, Nyeko took a cultural step to legalize his relationship with long-time fiancée Ruth Kirabo, by visiting her parents at Bombo in Luweero district for a Kinyarwanda introduction ceremony known as gusaba.

At this ceremony, it was a melting pot of cultures without clashing. Nyeko’s father Paineto Ofumbi is a Japadhola from Tororo district, his mother Florence Kampano is a Mufumbira from Kisoro. On the other hand, Kirabo’s late father, John Twagira is a Munyarwanda, while her mother, also deceased, is a Muganda.

Ordinarily, the introduction should have been exclusively a Kinyarwanda affair but again, the groom is from Tororo though born and raised in Buganda. Even more, the function was held in Buganda; therefore, it had to accommodate the three ethnicities. All the customs of a Kinyarwanda introduction ceremony were adhered to.

In fact, for more than two hours, majority of the groom’s entourage including the groom himself understood next to nothing that was being said and done. Occasionally, when words which have similar meaning or were in Luganda would be said, such as ‘omuwala tumukuwadde (we have given you the girl)’ that is when the groom’s entourage would erupt in ululation.

Also, customs relating to bride price such as a hat and a walking stick and cows [the family asked for eight] were also delivered. On the other hand, gifts to the groom’s entourage, especially the close relatives such as his mother, father and siblings, were also given by the bride’s side. And moving on, the customs of the Japadhola of donating gifts such as millet and a turkey were also observed. Not to be left out, Buganda customs relating to kwanjula were also observed, making Nyeko’s function unique.

The groom gave Kirabo’s family gifts, including the Kabaka and Nnaabagereka’s portraits, Buganda’s map and certificate. In an interview, Nyeko said this should not surprise anyone, because Buganda accommodates everyone who lives in it.

“I can proudly tell you that I’m a Muganda; not because I have lived here all my life, but because Buganda is not home to only ethnic Baganda but all of us who live in it and identify with it. We are proud of who we are and it shouldn’t surprise anyone that we respect all the Buganda customs; we are part of them,” Nyeko said.

The colourful function was not only pregnant with cultural diversity, but also had a full dose of politics. In fact, right from the groom’s entourage, one would not look hard to know that this was a function of a politician. In an interview, Nyeko said they had been asked to have an entourage of 25 people. Still, that number must have been doubled. Many of his constituents when they heard that their MP had a function, invited themselves.

The motor vehicle convoy that snaked through the narrow and dusty road of Nkondo village, forced many locals out of their houses to admire. The venue was also decorated saliently with red flowers, the official colour of the National Unity Platform (NUP), the party that Nyeko subscribes to. Nyeko also had a large representation of his fellow legislators, who, save for Agnes Nantongo Kirabo, the youth MP representing Buganda who subscribes to the ruling National Resistance Movement (NRM), and Moses Kabuusu of the Forum for Democratic Change (FDC), predominantly came from NUP.

Unlike many functions where the church leaders are only given a few minutes to pray at the beginning of the function, at Nyeko’s introduction, there was a complete, albeit condensed service that left some in the audience grumbling as to why it was not held before the groom and his entourage arrived.

Rev Captain Patrick Nsimbe, the priest of Nyimbwa parish beseeched Kirabo to respect her husband as that was the only way that their marriage would work.

He also cautioned Nyeko against cheating on his wife.

“You are taking Ruth when she is young and very beautiful, but after sometime, she will start to change with age but even when she changes, don’t look elsewhere. Be with only your wife; the one you have come to pick here today. Don’t feed on any other food but hers,” Nsimbe said.

For his part, Pastor Isaac Kiwewesi of Kansanga Miracle Centre where Nyeko fellowships from, thanked him for always seeking to live a godly life.

“Derrick is a very prayerful person who is always happy; we pray to God that this marriage brings more happiness to you two. We pray that he grants you sustenance because a marriage of poverty is also very difficult,” Kiwewesi said.

When her turn came, Barbara Itungo Kyagulanyi, the wife to Robert Kyagulanyi Ssentamu the leader of the National Unity Platform thanked Nyeko for choosing to legalize his relationship with Kirabo. She said that marriage is the first test of everyone’s leadership skills. She added that if a person cannot look after his wife properly, how could he possibly take good care of a whole constituency?

Her message was not very different from that of Joel Ssenyonyi, the Nakawa West MP and spokesperson of NUP, who hit out at critics who are criticising NUP leadership for holding mega wedding parties amidst the suffering of their supporters.

“There are some people who call us bayaye; we want to show them that even in the ghetto, we have responsible families. We want to show them that we are responsible people who are role models as family people, role models as leaders. We must lead by example. That’s why I’m calling upon every leader in our party to legalize their marriages,” Ssenyonyi said.

In the recent past, NUP diehards including Ssenyonyi, Ali Bukenya (Nubian Li), Eddie Mutwe, Francis Zaake and Waiswa Mufumbiro, among others, have wedded with great pomp, attracting criticism from different circles. In an interview, Nyeko said those criticizing them for holding wedding parties want to take away their right of being human beings.

“Because we are fighting the dictator doesn’t mean we shouldn’t live our lives. They want us all the time to be miserable and only running from one court to another to rescue our people who have been kidnapped. But I want to give them bad news; our getting married like anybody else will not derail our effort to fight them. They are creating this narrative of people who are out of touch with the people, but our people are intelligent enough to read into this nonsense and disregard it as NRM propaganda,” Nyeko said.

The function that started 10 minutes to 1 pm ended at 8:20 pm. Asked when the wedding will take place, Nyeko said, he did not have an exact date because it requires a lot of preparation.