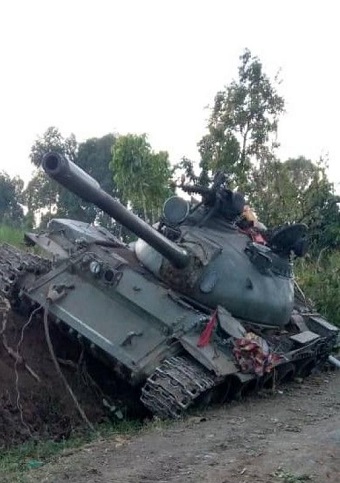 An abandoned tank at the border

M23 rebels have captured Bunagana border on the side of the Democratic Republic of Congo (DRC), forcing over 150 government soldiers to flee into Uganda. The Congolese soldiers surrendered to Ugandan authorities at Bunagana border.

This follows renewed fighting near Bunagana border in Rutshuru territory which started on Friday. A Ugandan security source at the border, says that the soldiers fled into Uganda following non-stop fighting on Sunday throughout the day and night. The FARDC soldiers, who were manning the border abandoned tanks and other kinds of weapons as they fled to Uganda.

While at the border, they handed over all the guns to Ugandan security and were escorted to the nearby Uganda Peoples Defense Forces (UPDF) barracks in Kabaya, Bunagana. The development has increased tension among Congolese civilians.

Many Congolese nationals are crossing into Uganda because of the heavy gunfire that can be heard at the Bunagana border. Uganda has also tightened security at its borders with the heavy presence of heavily armed UPDF soldiers and police personnel. Hajji Shafique Ssekandi Ssengoba, the Kisoro resident district commissioner, says that more than 30,000 civilians have crossed into Uganda.

Asked about the FARDC soldiers who have fled to Uganda, Ssekandi said that he was yet to receive a brief from the security agencies at the border. Bunagana border is the main connection between Uganda-Rutshuru and Goma towns in Rutshuru territory.

Once by looting Resources and Demanding Money from United nations to attend to the Flux of Refugees!! NO WAY!!

Congo is Strong Enough to Flush All Intruders out its Territory!Notorious Robbers Movement is Bankrupt to Pay off the Soldiers!..Turn the Guns and Liberate Yourselves ..Impoverished Gallant Sons of Uganda!Or Else the Devil is Planning a Destructive Outcome for All of You!
Report to administrator