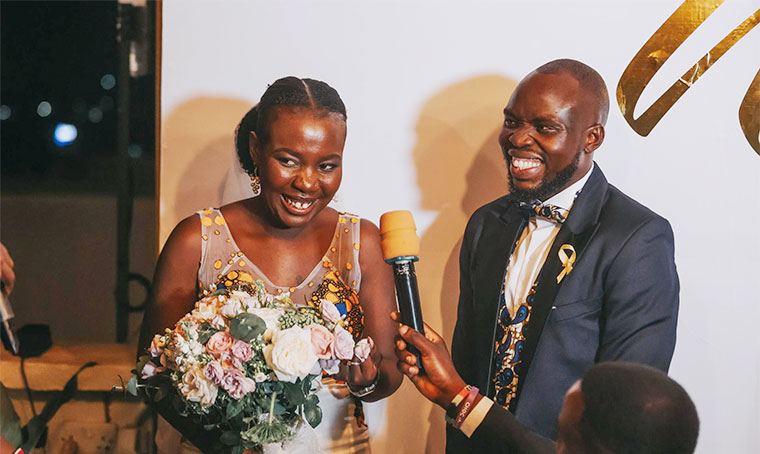 When 26-year-old Olivia Karungi, donned in a white satin body-hugging dress, accentuated with Kitenge walked down the aisle on May 27, it was not to exchange marriage vows of living happily ever after with her friend, Moses Echodu. It was a celebration and the climax of the mock-up wedding that had raised Shs 10 million to support children suffering from cancer. Their initial target was to raise Shs 5 million.

Our reporter met 31-year-old Echodu at The Aleph, a rooftop bar, and restaurant in Kamwokya, the venue of the mock wedding ceremony. Echodu, who walks with a limp was all smiles, wearing his silver wedding band.

A few minutes into the interview, Echodu received a phone call from Karungi. Smiling, Echodu answered the call, referring to Karungi as 'wifey'. If one doesn't know that the wedding was a hoax, it would be easy to believe that these two met, fell in love, and decided to get married.

Prior to getting ' married', Echodu and Karungi were what one would term casual friends. They knew about each other, and even attended the same events but were not close friends. According to Echodu and Karungi, the idea of a fake wedding was birthed by their mutual friends. The 'couple' said while they had never dreamt of getting married, the entire campaign incorporated things they are both passionate about cancer and weddings.

Karungi, a civil engineer by profession and co-founder of Eco Options, a company that sells eco-friendly menstrual products like the menstrual cup, says she did not think twice about getting involved in such a cause.

"When Moses told me about the idea, I was very open to it. First of all, it would help the Uganda Child Care Foundation a lot, both financially and also with publicity. I always try to help people in any way I can. Secondly, I love weddings so having one of my own would be a good idea. The fact that I could just go back home and not really be married made it better," she said.

They started organizing the "wedding" earlier in the year after two of Echodu's friends posted a press release on Twitter indicating that he was looking for a wife.

"It was a joke but no one believed it. It began getting to me until one of my friends asked whether I could use this joke to raise funds for the foundation. We looked for possible brides for a while but had almost given up until a friend read something on Olivia's Twitter page that showed she might be a good candidate," he narrates.

According to Echodu, Karungi had tweeted around that time and expressed the desire to wear a wedding dress and have her pictures taken after reading a copy of the American Cosmopolitan magazine. Once Karungi accepted to take part in the campaign, it took three months to organize the wedding.

Friends and well-wishers of Echodu and Karungi reached out to many service providers. While the 'couple' was eager to take part in the wedding for various reasons, their parents were not amused by the idea. Their thought the wedding was not the best way to raise money since it might cause irreparable damage to the hopes of the duo getting married in the future.

Once the parents gave the go-ahead, the couple's goal was to organize a low-budget wedding. To do this, they sought partners who could give them services as contributions to the wedding. They received donations in terms of clothes, food, salon, drinks, bridal cars, venue, and music. While they didn't have to pay for anything, Karungi describes the process of planning a wedding as a very tedious endeavor that she would not like to participate in any time soon.

"Organizing a wedding isn’t easy at all. It’s tiring and stressful so I may not be thrilled about doing it again," Karungi said.

On the day, Echodu and his bride together with their bridal team which consisted of a groomsman and a matron walked down the aisle at Aleph and exchanged vows before a priest. Their vows, which Echodu describes as silly were a promise to stand up and raise funds for childhood cancers.

At the reception, all the guests (around 120) people had to pay for their food and drinks. Echodu, a childhood cancer (burkitt lymphoma) survivor, says that he wants the funds that they raised from the campaign to go to families struggling with the disease.

An estimated 3,000 children are diagnosed with cancer annually. Of this number, 75 per cent of the children respond to treatment and cure according to the Uganda Cancer Institute. While the wedding was for a good cause, it has raised eyebrows in some circles of society with many looking at it as something the two might come to regret in the future.

Two weeks after the fake wedding, Echodu and Karungi are left with wedding rings and memories that were captured on camera as momentous of the campaign. When our reporter asked them if they would consider going through another fake wedding, they both smiled and said not any time soon.

"This wedding was for a good cause. People spend Shs 100 million planning and throwing big weddings only for the groom to cheat on a bridesmaid. All that money goes down the drain. If two people could get married in a fake wedding to raise money, I don't see the problem with that. The money we got will be able to help so many children. But for us now, maybe an anniversary event will be more suitable," Echodu said.

+2 #1 Lillian Nakimbugwe 2022-06-15 08:11
Hi, this article was a good piece written and captured all the details of this event, however, as a reader on your online platform, I am disappointed with the language use.

It's derogatory and demeaning yet it was describing an event that happened for a good cause. "fake wedding raises 10M".the title isn't OK at all.

It's important to capture the language properly rather than sound like you were insulting their efforts. Thanks.
Report to administrator