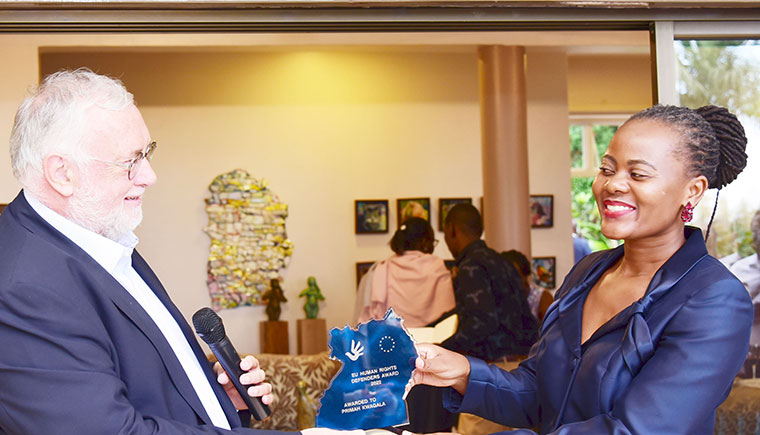 A human rights lawyer and executive director of the Women’s Probono Initiative, PRIMAH KWAGALA, 34, is the 2022 winner of the European Union Human Rights Defenders’ award.

The award is given annually by the EU member states and the Embassy of Norway to recognize an outstanding contribution by a human rights defender who often works in difficult circumstances in Uganda. Yudaya Nangonzi attended the event at the residence of the ambassador of Belgium in Kololo last week.

An individual eligible for the award is nominated by another person or human rights organization active in the country. Out of the 85 nominations, only three people made it to the shortlist; Primah Kwagala, lawyer Eron Kiiza, and Yisto Kayinga Muddu.

Kiiza was recognized for taking on high-profile cases to court by defending human rights activist Nicholas Opiyo and novelist Kakwenza Rukirabashaija as well as leading a campaign against the continued degradation of Bugoma forest which generated public and legal debate against the Hoima sugar company last year.

Kayinga is a coordinator of the Community Transformation Foundation Network which strives for equal access to basic services and human rights protection based in Greater Masaka. Kwagala emerged a winner in recognition of her outstanding recent work to advance human rights, particularly the rights of women.

The panel cited the Covid-19 lockdown when she worked tirelessly to ensure the release of women that were unjustly incarcerated for curfew violations, including mothers who were seeking medical treatment for their babies.

In 2019, Kwagala also helped secure the repatriation of several women who had been trafficked to the Middle East and were trapped in difficult conditions. Speaking at the ceremony, the ambassador of Belgium to Uganda, Rudi Veestraeten, said it was a difficult process to narrow the shortlist to just three people but Kwagala stood out because her work has ensured that legal aid is extended to many indigent women.

“Women in Uganda face numerous challenges and the Covid pandemic has further exacerbated the situation. The state and its authorities need to urgently take part in the collective effort to respect and defend human rights for all Ugandans regardless of their age, ethnicity, gender, and political affiliation,” Veestraeten said.

He said that far too often, some of the victims of violations are compensated during the process, and actions by the government are halted.

“The state agents responsible for violations need to be properly held accountable. We have so far seen none of this. The EU member states will continue to have these difficult conversations to chat a pathway to a situation of greater respect for human rights and a brighter future for all Ugandans,” he said.

While receiving the award, Kwagala acknowledged that she didn’t expect to emerge the overall winner. She said Kiiza and Kayinga were equally outstanding advocates of human rights, especially with Kiiza who has dominated the media over the Kakwenza case.

“This award is very exciting because being seen at the core of the fight for a right to dignity is heartwarming. We don’t receive any funding from the EU but people nominated us. This is applauding and means a lot to my team,” Kwagala, who joined the legal profession in 2010, said.

She added: “I was shocked because I work with very poor women. Who cares about them? Many a time, my peers in the legal profession wonder why I waste billable hours with people who are not going to pay me. They find it weird but I insisted that women deserve to be protected.”

Kiiza described her as a committed, knowledgeable, and hardworking lawyer who has women and young girls at heart.

“I missed the award but I am glad it went to the right person. Primah has impacted women and she deserved it. I encourage her to keep pressing for justice because not everyone has the money to pay for legal services in this country,” Kiiza said.

Kwagala comes from a lineage of strong women that have worked so hard to impact her life. She is inspired by her grandmother Kevina Nangobi whose desire to join formal education was cut short by her father.

“I always say my grandmother is the force that pushes me hardest. Born in the 1930s, she desired to study but her father sent only her brothers to school. She always told me that the only education she achieved was attending catechism classes at her Catholic church in the village. So, every time, she kept asking me to go to school and share my experience because she is illiterate,” Kwagala said.

She urged participants at the ceremony to level the playing field for a girl or woman by equipping them with tangible resources to enable them to lead independent lives.

+1 #1 Ibra 2022-06-18 14:02
Congrats to the brave human rights lawyers!
‘The state agents responsible for violations need to be properly held accountable. We have so far seen none of this.

The EU member states will continue to have these difficult conversations to chat a pathway to a situation of greater respect for human rights and a brighter future for all Ugandans,” he said (the Belgian ambassador).

M7 should practice (and be accountable) what he preaches- security should not torture Ugandans and publish the report the lead to death of over 52 Ugandans by the killer cops in November 2020 - Kampala Massacre.
Quote | Report to administrator
Refresh comments list
RSS feed for comments to this post
Add comment