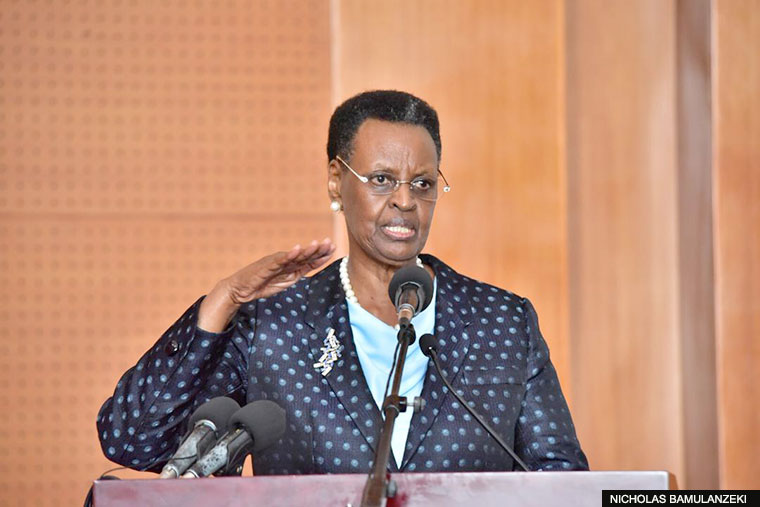 The minister of Education and Sports, Janet Kataha Museveni has reportedly halted the allocation of funds and distribution of items donated by the private sector to facilitate the recovery of the education sector citing foul play by ministry officials.

In November last year when Uganda prepared for school reopening, the Education ministry organised a symposium with the aim of bringing together key stakeholders from the private sector to support its recovery programmes.

During the conference, a total of 34 institutions agreed to contribute support totalling Shs 247.9 billion, with representatives from the Global Partnership for Education promising to match every shilling provided by the private sector, bringing the total to Shs 495.8 billion. Others promised to provide physical items and services.

Now, URN has learnt that other organizations have been honouring their commitments from the beginning of the year. According to ministry sources, a significant sum of money, as well as other physical assets, have already been gathered from ten institutions. However, there have been suspicions that some officials were planning to take some of the funds and items.

"They intended to distribute some of this cash to schools that had already overcome their challenges," one of the sources pointed out.

Before the reopening, the government granted recovery funding to schools in need. Other schools, on the other hand, got help from their local governments, communities, and non-governmental groups. The ministry also recommended that schools with significant issues, such as a shortage of classrooms be helped through budget allocation, which was done.

According to the source, months after reopening, schools with difficulties that had previously been helped were also on the list of schools that would be supported with private sector cash. This triggered the education minister to raise questions.

"At first, top management thought that the items could be given to schools as they come in. But, remember they have been several lines of funding the recovery programme. The first lady was worried about duplication of work or even misallocation of resources and possibility of swindling the funds,” the source added.

Dr Jane Egua-Okou, the director for higher technical vocational education and training in the ministry of Education has confirmed the development noting that the minister has since ordered that all the available resources from the private sector be but in one pull at the moment.

Egua-Okou adds that Ms Museveni has also directed that a new assessment be carried out to establish schools to benefit from the funds collected from the private sector.

Although Egau-Okou ruled out corruption tendencies in the process, she says the move has been made to ensure that funds are not directed to schools whose problems are already solved yet there are others who are still in dire need of help.

She also disclosed that they have so far collected Shs 1.5 billion in cash from local private sector players and the money is currently in a given account in the Bank of Uganda. She further adds that several development partners like UNICEF have also met their pledges though their contributions are channelled in other well-established avenues.

Janet is corrupt to the core! Before she halts the distribution of that donated money, let her give us the accountability of the billions which were allocated to the ministry of education during the 2 years of the schools lockdown.

The ministry of education is the next in line after the security sector headed by M7 to receive the largest share of the budget. Where is all that money that was given to Janet while students were locked lockdown for 2 years.
Quote | Report to administrator
0 #2 kabayekka 2022-06-15 15:46
One can still see many troublesome kids refusing to attend schools.

A laway should be made out to force all children to attend class for at least 7 solid hours a day for 5 days. This way NRM corruption in education will be able to be defined properly by the various media outlets.
Quote | Report to administrator
+3 #3 kiapikfreddie@256 2022-06-15 18:10
OMG what a country
Quote | Report to administrator
+6 #4 Lysol 2022-06-15 22:27
The education system is rotten to the core. It's now a cash cow for the corrupt killer regime.