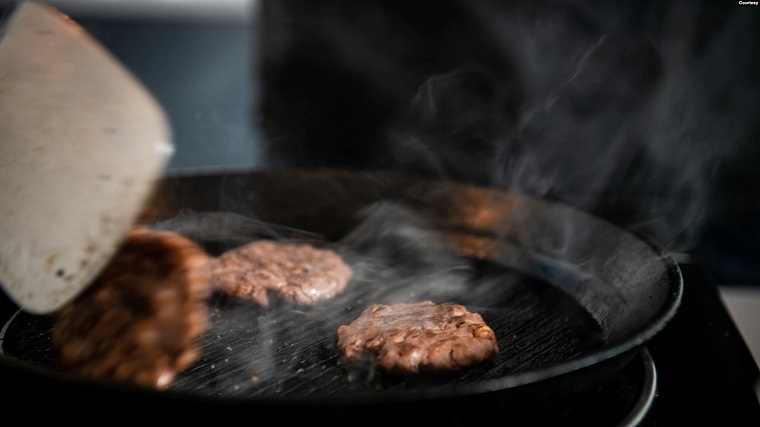 Lab grown meat being cooked in a pan

South Africans are well known for their love of barbecuing meat, called "braaing" in Afrikaans.

But in a bid to cut down on the harm livestock farming does to the environment, one South African company has become the first on the continent to produce lab-grown meat. The Mzansi Meat Company started up about two years ago. Co-founder and chief operating officer Tasneem Karodia, 31, said they have been funded by South African and overseas investors, most of whom have an interest in the environment, animal welfare and/or health.

Growing meat in a lab begins with a fairly simple procedure, Karodia explained.

"We take a biopsy from an animal and the biopsy's really kind of the size of a peppercorn. Usually take it from the shoulder with some muscle and fat. And it's really quite a small process. And it takes five minutes and the animal is up and running within an hour," she said.

"And from there we process it currently in a lab. We do a few things to make sure that it works and continues to grow." She said the company replicates the same conditions that are in a cow, just outside of the cow. So, for instance, the meat is put at 37 degrees because it's a mammal, and it is given sugars and amino acids.

"When we're at a large scale, what this looks like is not really a lab but it looks like a brewery," Karodia said. "So, cells will grow in steel vats like your beer grows, and that's really what it looks like at scale."

She said because cells grow quite flat, the company is not able to grow steaks, so instead it opts for minced meat to make burgers and sausage. At a barbeque or braai restaurant called Shisa Nyama in Woodstock, Cape Town, a woman behind the counter said she would be keen to try the cultivated meat once it becomes commercially available.

"Government needs to also come up with clear policies as well as guidelines that can be legislated in terms of, if the route of cultivating meat is taken, that all safety is ensured and that's got to be paramount," Sibisi said.

Karodia said Mzani is hoping to get the go-ahead from the South African government to sell its products to restaurants in 12 to 18 months. For now, she said, the target market is South Africa, but the company is also considering other parts of the continent.

+2 #1 Lysol 2022-06-16 05:53
Imitation meat doesn't have the taste and flavor of the real thing.
Quote | Report to administrator
+2 #2 Odongkara Bidong 2022-06-16 06:58
For sure with our Ugandans who always by hook or crook want to be first in everything be it good or bad are surely lining up to place their orders to make a killing in Uganda not bothered about people's health!

Yeah Better for the environment, fine, but what about people's health? These are greedy guys who are out to make money and money only and nothing else in the name of environmental protection but at the expense of human health! God created all: humanity, animals and the environment with man being the head, to live together in perfect harmony.

With this development what will survive on the face of the earth are the animals and the environment and is this what God in the beginning intended? Such “artificial” meat should be banned from human consumption and not imported into the country.
Quote | Report to administrator
+3 #3 WADADA rogers 2022-06-16 09:33
That is not a reason to celebrate, its a moment to reflect and worry, it is impossible to manufacture meat in a laboratory and call it meat, may be a meat chemical, very dangerous for human consumption
Quote | Report to administrator
+2 #4 kasede 2022-06-16 12:18
Quoting Lysol:

Imitation meat doesn't have the taste and flavor of the real thing.

It does BUT it requires a pschological mind twist to accommodate it in your guts.

I would SURELY vomit it all out if I were to imagine that it was grown out of human flesh. If it can be grown out of other animal tissues, logically it could also be grown from human one too. I can imagine that samples from Bantu Women's large bottoms would be a commercially fast growing tissue source. {Sorry, my imagination on this lab-meat issue is growing wild. Please continue to enjoy your burgers made from imported meat}.
Quote | Report to administrator
+2 #5 Kabuleta 2022-06-17 05:27
Cancer is already inside south africa, such genetic meats are not good for human use.
Quote | Report to administrator
Refresh comments list
RSS feed for comments to this post
Add comment