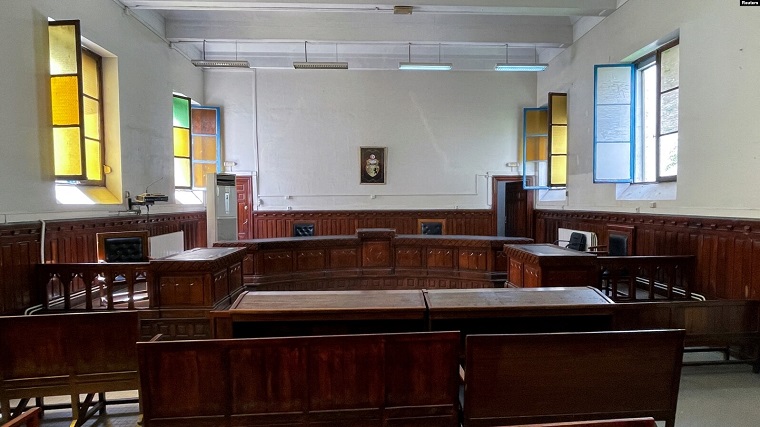 An empty courtroom in Tunisia

Tunisian judges decided Saturday to extend their national strike for a third week in protest of a decision by President Kais Saied to sack dozens of them, the judges said.

Judges suspended their work in courts June 4 and said the president's decisions were designed to control the judiciary and its use against his political opponents.

The judges decided unanimously to extend the strike for a third week ... to hold a day of rage in which the judges will protest in the streets in their uniforms," Mourad Massoudi, the head of the Young Judges Association, told Reuters.

He said members of the judges’ association had decided to stage a hunger strike against the decision to dismiss them. Another judge, Hamadi Rahmani, confirmed the decision.

Saied's move heightened accusations at home and abroad that he has consolidated one-man rule after assuming executive powers last summer. He subsequently set aside the 2014 constitution to rule by decree and dismissed the elected parliament.

Saied says his moves are needed to cleanse the judiciary of rampant corruption and that he does not aim to control the judiciary.

But longtime dictatorship gave no chance for them to learn how to govern, so there is no real leadership with real plans for after dictatorship, ust like in all liberated lands; Libya, Egypt, Irak, DRCongo & Rwanda that went streight to dictatorship again!

Uganda will be worse when Museveni finally dies of old age;

- tribally divided with tribal leaders not knowing what
"country, nation" mean & look up to Museveni,

- opposition leders only know how to blame
Museveni, non understands tribally divided
Uganda isn't a country any more & non of them will
ever be chief tribal leader as migrant Museveni is!

Do we still blame whites for doing business with Museveni, when it's Ugandans ensuring his post & family business?
Quote | Report to administrator
Refresh comments list
RSS feed for comments to this post
Add comment