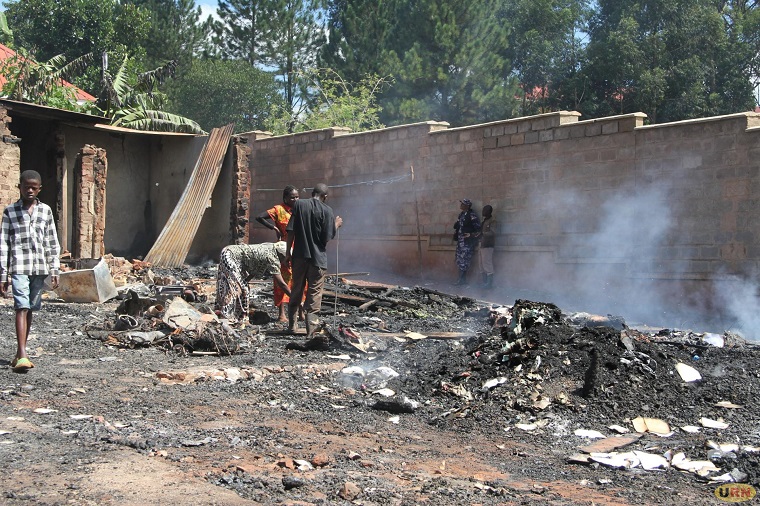 A team of forensic experts led by the police’s director of health services, Moses Byaruhanga have exhumed the bodies of two arson victims previously believed to have been killed in a May 2022 church fire.

The deceased include; 80-year-old Jonathan Kalyekira and another an unidentified person who were killed in a fire that gutted Holy Healing Ministries Church International on May 5. The police report confirmed that the church was torched amidst a land wrangle between the church leaders and their former landlord.

According to the report, a former landlord James Bagaga and his wife, Monica Kyazike sold a one-acre piece of land located in Mpumudde ward, in Jinja city's southern division, to Joseph Muwanguzi, the overseer of the church at a cost of Shs 20 million in 2015.

But in 2017, Bagaga asked Muwanguzi to give him an additional Shs 15 million, arguing that he had been duped into selling such prime land at a low price. Muwanguzi filed a civil suit at the Jinja Grade One Magistrate's court, contesting what he defined as unfair treatment by his former landlord.

Bagaga is reported to have resorted to threats and that on the fateful day, it is said that he employed a gang of about 20 youths to surround the church during overnight prayers. The congregats who were found inside the church were battered and the structure set ablaze. Several members escaped but two were trapped and killed in the night fire.

The earlier autopsy report conducted at the Jinja regional referral hospital’s mortuary confirmed that the deceased succumbed to severe burns. Bagaga and Kyazike were arrested on May 10 and later remanded to Kirinya prisons awaiting prosecution. However, they tasked police to conduct fresh autopsies of the deceased, arguing that the church was empty at the time of torching it and that the existence of bodies at the fire scene was mischievous.

Police secured the court order on Friday and agreed to exhume the deceased in the presence of the accused persons’ lawyers, family members and the church leadership to ensure transparency in the whole process.

The late Kalyekira has been exhumed from Budondo ward, in Northern division, Jinja city, whereas the unidentified person’s body was exhumed from the Uganda People's Defence Forces (UPDF) cemetery, located along the Jinja-Iganga highway within Jinja city.

Kiira Region’s police spokesperson James Mubi says that the samples extracted from the deceased remains will be taken to the government analytical laboratory for further analysis before releasing a comprehensive report on the same ahead of the main trial.

This sort of commercial business like the private school education that do not have to pay legitimate taxes in Uganda must stop.

No wonder Rwanda was wiser to stop church work runnig out of control in the African communities.

This sort of commercial business like the private school education that do not have to pay legitimate taxes in Uganda must stop.

Surely Jesus never had to buy land and build great church buildings to convert the troublesome non believers of this world!

I agree with you on the commrcial side of praizing the heavenly dictator. However, please note that Jesus bullied the poor to get whatever he wanted: (a) Did Jesus pay for the hackers fish that he feed the multitude with?

That hacker lost his entire stock of fish for that day, and probably his entire operational capital as well. (b) Did Jesus buy/hire the young donkey that he FINALLY rode on to Jerusalem. I don't think so. I PITY THE POOR FARMER! To me, he grabbed/ stole the donkey. Anyway, grabbing is ALSO not a crime in Ug if the GRABBER IS RICH OR FAMOURS.
Quote | Report to administrator
+1 #3 WADADA rogers 2022-06-20 11:26
They have diverted the issue from arson to murder, this pastor must have created the story of the burning of these two people, i dont think they were ever burnt in that church
Quote | Report to administrator
Refresh comments list
RSS feed for comments to this post
Add comment