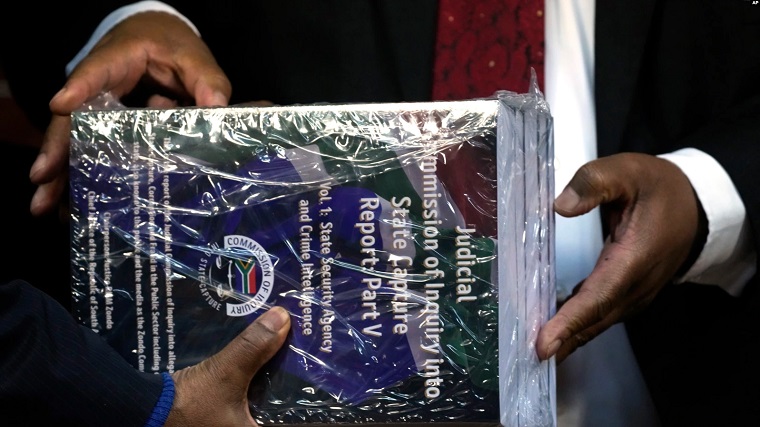 Acting chief justice Zondo late Wednesday gave the final report on the plunder of state resources under Zuma to his former deputy and successor, President Cyril Ramaphosa. The latest installment of the five-part report focused on alleged wrongdoing by the state security agency and at the public broadcaster and other state-owned enterprises. It said Zuma’s former spy chief should be prosecuted for graft and targeting the president’s foes.

It also found that Zuma’s son, Duduzane, acted as a conduit between the wealthy Gupta family — business friends of Zuma’s whose influence over the president was said to amount to state capture. The report said Duduzane should also be investigated. Ramaphosa said the inquiry had presented evidence of abuse of power and praised the whistleblowers and journalists who helped uncover it.

“State capture was an assault on our democracy and violated the rights of every man, woman and child in this country," he said.

Previous parts of the report recommended Zuma be further investigated with a view towards prosecution and that the Guptas and several ministers face prosecution. Two of the Gupta brothers were arrested in Dubai this month and are facing extradition to South Africa.

The inquiry ran for almost four years, with South Africans watching the daily televised hearings shocked by repeated witness testimony on corruption at the highest levels of government. Zondo spoke of some of the challenges the commission had faced while probing the graft.

“A few members of the legal team that I know went through situations when their security needed to be beefed up because of the work that they do, that they did, in the commission,” he said.

Ramaphosa said the inquiry was vital to ensuring the survival of South Africa’s democracy.

“The report is far more than a record of widespread corruption, fraud and abuse; it is also an instrument through which the country can work to ensure that such events are never allowed to happen again,” he said.

But the report was also critical of Ramaphosa as Zuma’s deputy for failing to do more against “state capture.”

It was also highly critical of the ruling African National Congress (ANC) party. Independent political analyst Ralph Mathekga praised the inquiry for surviving political attempts to interfere with the process.

“The major finding actually here is that the ANC dropped the ball, the ANC-led government, the state capture inquiry speaks about major lapses in governance,” he said. “President Jacob Zuma comes out as the chief suspect.”

Zuma, who was forced to step down in 2018, is already facing trial on multiple counts of corruption in a separate case. He’s denied all wrongdoing. Spokesman for the Jacob Zuma Foundation Mzwanele Jimmy Manyi told VOA the report was “a lot of hogwash.”

Ramaphosa has four months to make his recommendations to parliament on what action must be taken. South Africans will be waiting to see what arrests and prosecutions might follow.

+3 #1 Odongkara Bidong 2022-06-24 15:30
Can the Chief Justice of Uganda Alfred Owiny Dolo achieve such a feat with the glaring Museveni’s involvements in shocking corruption deals in Uganda?
Report to administrator
+1 #2 Zaitun 2022-06-25 14:52
Quoting Odongkara Bidong:

Can the Chief Justice of Uganda Alfred Owiny Dolo achieve such a feat with the glaring Museveni’s involvements in shocking corruption deals in Uganda?

My dear broher, the likes of Owiny Dolo are part and partial of the corrupt government that will, with God's blessing, have a difficult exit the day their ever-living boss comes to pass!

Yes, all these guys who have reduced the country to be their small villages will hate and curse the day their mothers' brought them to the world. The fake rich ones of today should know that, those countries where they are hiding their loot will deny them everything the day they fall down the piedstall.

Ask the children of Mobutu whether they were able to get a dollar from the Swiss banks where he had heaped what he stole from the people of RDC?
What will fall on their heads will be greater, given that every country in the world knows that they are nothing but thieves.
Report to administrator
+1 #3 kabayekka 2022-06-25 17:14
It is unfortunate that this is a an African country where all the countries of the world did come together to make a last stand against human discrimination.

They all wished South Africa Good Luck! What now does all this African corruption mean? The Ganda have an African saying of warning to those who think that they are better than everyone else. Ssengavuddemu ngazeemu!
Report to administrator
0 #4 Lakwena 2022-06-28 15:44
In other words, as days follow nights: after 36 years and counting of state inspired Corruption sic State Capture ("the corrupt build 5-Star Hotels and create jobs", courtesy of Gen Tibuhaburwa); we also have our Zuma-Gupta (Sudhir) accumulating damning report about president Museveni and close family members ravenous corruption (State Capture).
Report to administrator