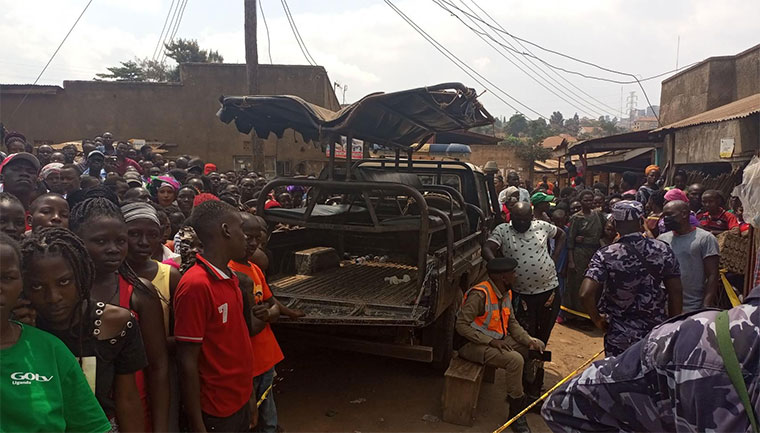 Police and residents at the scene

Residents of Mulimira zone in Kamwokya, a Kampala city suburb today Wednesday morning woke up to the shocking news of the death of a couple inside their rented room after three days.

The dead have been identified as Tomas Enaku, a private guard from Trust Security Company, and his lover, Filder Akiteng, a tailor in the same area. The deceased's neighbours say that they last saw the woman outside on Sunday evening.

They, however, started smelling a stench this morning, which they couldn't trace its origin. Rashid Lubega, one of the neighbours, says that they started tracing the source of the stench until they saw a swarm of flies originating from the locked room.

He explains that they immediately alerted the police, which broke the door and found the couple's decomposing bodies.

“All my colleagues came and we started searching everywhere, one person saw flies coming out of a locked room. Then we peeped through the window but we could not see anything apart from the smell. We called the chairman and police, then we broke the door and found them dead," Lubega said.

According to Lubega, they found a saucepan of maize on a charcoal stove, which raised suspicion that the couple could have suffocated to death. Terrey Kivumbi, another neighbour, said that the room was too small for the couple to live in with all the stuff they had inside. He blames the high poverty levels in the country that is forcing couples to rent tiny rooms.

Joseph Kakooza, the Mulimira zone LC I chairperson, said that this is not the first incident of people dying under similar circumstances within his area.  He explained that the deceased woman had just returned from the funeral in the village.

Kampala Metropolitan Police spokesperson, Patrick Onyango, says that the deceased's bodies are lying in the city mortuary Mulago pending postmortem to ascertain the cause of death.