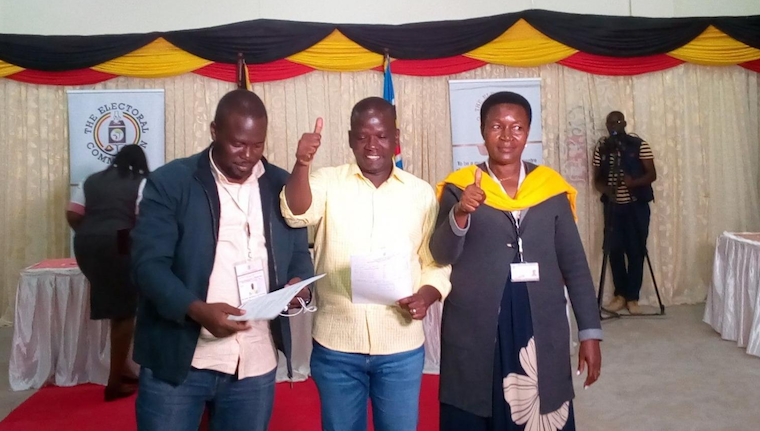 Ariko (C) after being declared winner

The ruling National Resistance Movement candidate Herbert Edmund Ariko has been declared the winner of the Soroti East MP by-election amidst vast allegations of electoral malpractice.

Ariko was declared the winner at around 10 pm by the Soroti City returning officer, Christine Eyuu. Last month, the Court of Appeal nullified the election of Attan after Ariko contested the results on grounds that his strongholds; Aloet and Opiyai wards were erroneously annexed to the Soroti West, which he noted disfranchised more than 5,000 voters.

Yesterday's polls were characterized by violence and reports of ballot stuffing, especially at Omalera, Otatai and Owolo Polling Stations.

Voting was also halted for more than two hours in Omalera B and Owalei polling stations after residents protested the exercise over ballot stuffing.

In Omalera B polling station, where 42 voters had cast their votes, the agents and electoral officers discovered more than 200 ballot papers stuffed in the ballot box in favour of the NRM candidate Herbert Edmund Ariko.

Justice Simon Byabakama, the Electoral Commission Chairperson asked the police to investigate the cases of violence that were reported at various polling stations. Soroti East Constituency has 63 polling stations spread over 13 wards.

All aparators including the "tulina Amaje" were in the field ballot stuffing. At the Center of the city, they failed but Teso RDCs invaded the village polling stations with their escorts and threatened locals as they stuff ballot papers in favor of Ariko
Report to administrator
+8 #5 Jama 2022-07-29 16:40
You will never win the elections organized on gunpoint at expense of the national treasury by an unpopular regime.

It's time to boycott these parody kind of elections otherwise you will be accompanying robbers on their adventurous desire to hang on power.

It's a wild dream to think that these half baked ,elections will ever bring political change in this country, unless if yo you are to maintain the Tibahabarwa dynasty for another forty years.
Report to administrator
+3 #6 Mubiru 2022-07-29 20:59
Every comment so far exposes one of the most fraudulent so called voting ever conducted in this country in favour of NRM.

For the FDC to gain such votes under prohibitive primitive circumstances and despite Museveni campaigning for his hunting poodle including all govt forces working for NRM candidates proves that Okia won the election. FDC must be very proud of the efforts they put in to frustrate the thieves.

Surprisingly non NRM Ugandans are eagerly looking forward to the next elections which they know very well that they will be stolen. I can't see any sense in holding the so called which are a waste of Uganda funds which should feed starving Ugandans especially the Karimajong.

For goodness declare yourselves"Winners" well in advance without fooling the suffering unconnected Uganda paupers. This is mockery of democracy blindingly favoured by funders pouring billion ending up in huge stomachs of thieves.
Report to administrator
0 #7 Dramadri Ronald 2022-07-30 12:26
Quoting stevenn:

The thieving leaders of this country are wicked to the core

Now why didnt those village fools go to report their case to the police immediately?