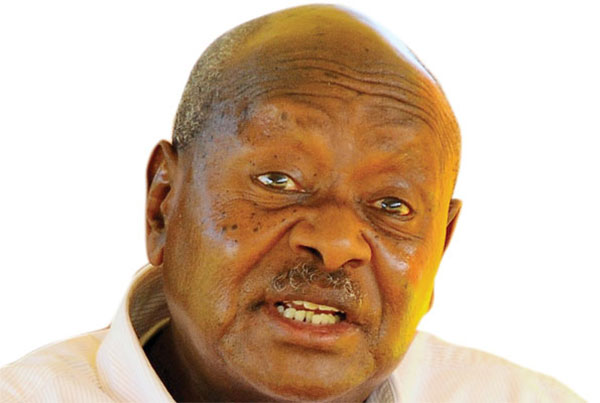 Speaking at the closing of the Inter-Ministerial Conference on Migration, Environment, and Climate Change last Friday at the Commonwealth Resort Munyonyo, President Museveni ordered Chinese nationals growing rice in wetlands to vacate with immediate effect.

The president has even ordered the arrest of government officials who parcelled out the wetlands to private developers but none has been arrested and not one land title has been cancelled.

Last Friday, the president said, “Here in Uganda we are contributing to the destruction of wetlands. It is our responsibility. It is not the Europeans who are destroying the wetlands; it is us. When we got in touch with the Chinese, they introduced a culture here that our people didn’t know. The culture of growing rice in swamps. I don’t know what swamps they use in Asia but here what they call swamps are tributaries of River Nile. When you grow rice in the swamps, you are committing a big crime. This must stop! I don’t know what the scientists told you but here in Uganda, 60 per cent of the rain is from the oceans and 40 per- cent is from the wetlands...”

Chinese have a rice farm in the Lwera wetland along the Kampala-Masaka high- way at Lukaya. Kehong Uganda Industrial Development Limited has a rice farm in Lubenge wetland in Luweero district. There are rice farms and several factories in wetlands along the Mukono-Jinja highway like Tian Tang, Abacus Pharmaceutical Industries Limited and Global Paper, etc.

In October 2017, Pastor Samuel Kakande of the Synagogue Church of All Nations in Kampala appeared before Justice Catherine Bamugemereire-led commission of inquiry into land matters. Kakande at the time was accused of having a 40-square miles rice farm in a wetland yet he had been licensed by National Environment Management Authority (NEMA) to grow palm trees there.

In their November 3, 2021 statement, Nema said that although the developer (Rajiv) had a valid Environment and Social Impact Assessment (ESIA) certificate permitting him to develop a recreational area including a sand beach, marina, and hotel within the 200 metres buffer zone of Lake Victoria; he was found dumping murram into the lake, despite a recommendation by the District Environment Committee to preserve a 30-meter buffer zone from the shoreline.

“The developer claimed that murram was being dumped into the lake to recover the original project area that was taken up by the rising water levels. On the contrary, one of the conditions in the ESIA certificate is that the developer is duty bound to prevent degradation of the lake-shore following the National Environment (Wetlands, Riverbanks and Lake Shores Management) Regulations S.I. No. 153-5,” the statement added.

“I don’t like swamp rice, swamp rice here is dangerous be- cause they grow it in the Nile tributaries. They are branches of the Nile, they dry them up and so I want to stop it,” President Museveni said.

In an April 22, 2020 letter to Sam Cheptoris, the minister for Water and Environment, President Museveni directed him to evict encroachers on wetlands, river banks, and government forests with immediate effect to mitigate the effects of climate change. Museveni’s letter read in part, “...I am therefore directing you to remove all the people on the wetlands, shoreline, river banks, and government forests. Since I know Uganda very well, I can confirm to you that all the other encroachers on wetlands are not bonafide people. They are not genuine but conscious liars and must be removed”.

The directive, however, exempted people residing in historical wetlands in Bukedi, Kigezi and Busoga whom Museveni said had been misled by the previous governments to occupy these pieces of land.

In July 2021, Beatrice Anywar, the minister of state for Environment, announced that the cabinet chaired by President Museveni had banned rice growing in Ugandan wetlands, and approved the cancellation of at least 420 land titles in wetlands, especially in the districts of Wakiso and Mukono. Anywar said the cabinet directed that government officials who participated in the issuance of titles in wetlands and forest reserves, be held culpable.

Asked whether the land titles issued in wetlands had been cancelled, Denis Obbo, the spokesperson for the ministry of Lands, Housing and Urban Development, said,

“Progress towards cancellation of the over 420 titles has taken place. We have at least advertised the intention to cancel these land titles in the newspaper. Some sittings with the said land owners have taken place at the zonal offices of the ministry of Lands and we have registered some progress. We have faced some challenges in the process because when a person takes the matter to court, no progress can be made unless the matter is first cleared by a court. Despite all these challenges, we shall be implementing the presidential directive to the letter.”

Asked whether the land titles issued in wetlands like Lwera will be cancelled, Obbo said the matter was under the docket of the National Environment Management Authority.

Responding to questions shared via WhatsApp, Dr Barirega Akankwatsah, the executive director of Nema said, “Nema is determined to implement the presidential directive to stop rice growing in wetlands. We are coming up with programs to educate the masses, and also design alternative sources of livelihoods like fish farming for communities dependent on rice growing in wetlands”.

Asked whether licenses for rice farming in Lwera along the Masaka-Kampala highway shall be withdrawn, Barirega added, “The president was very clear, no more rice growing in wetlands. However, the Lwera issue is a complex one as the Lwera rice scheme is on privately titled land. It’s very different from community rice schemes grown on public land or wetlands”.

Asked whether there was a loophole in the environment law being exploited by the encroachers, Kiiza added, “The law is not the problem. Impunity is the problem and the failure of relevant government agencies to enforce the great environmental laws, policies, and executive orders...A culture of impunity, militarism, and corruption in environmental and natural resources governance in Uganda worsens the matters. Environmental laws should be enforced uniformly and strictly.”

+6 #1 WADADA rogers 2022-08-03 08:57
Observer, please dont join the government in playing mind games, which Museveni can bark and the Chinese dont catch a cold.

How come when he barked cameras were installed on Uganda roads. Is he not the same person who authorised the construction of Sino industrial park in Mbale and is he not the same person who commissioned it when it was due to start operations. Observer pleaseeee, dont go there
Report to administrator
+8 #2 Lysol 2022-08-03 10:16
Museveni should keep his face mask on. Thanks to COVID-19. When was the last time he saw a dentist One may wonder.
Report to administrator
+3 #3 Lakwena 2022-08-03 15:53
In other words, instead of the dog barking; when it is the owner of the dog starting bark, then you can conclude that something has gone terrible wrong and the home-state is no longer safe.

E.g. that the dog must have lost loyalty, fled out of fear or become a stray because of starvation due lack of care or dead.

That is the stage of how vulnerable to foreign Investors Gen Tibuhaburwa and/or Uganans have become.
Report to administrator
0 #4 kasede 2022-08-04 16:48
Quoting WADADA rogers:

Observer, please dont join the government in playing mind games, which Museveni can bark and the Chinese dont catch a cold.

I agree. The chinese are M7's so called "investers". In this particular case, the TAIL is surely wagging the DOG.
Report to administrator
+2 #5 Zaitun 2022-08-04 19:17
No! Why should he bark? Are the Chinese not his best friends and an example to Ugandans to follow, while bringing mor of these people to occupy the country but in thousands?

He is barking just becuse he wants to force us, Ugandans in believing that he is tough and working hard!

He can bark out his eyes but do not care an inch. The truth is that what he is doing is just to make us believe he is tough and caring about Ugandans. Yes this man hates Ugandans to death. He was proud to bring the chinese to develop the country while claiming that we are lazy; but which development, only devil knows. Let him better talk of exploitation of the natural resources of the country!

As reknowned slave traders, these guys have alreadly sold the country out. Yes, his barking is just to make Ugandans believe that he cares and loves Uganda, a country he has already sold to Chinese, Indians, Turks.... and name them!
These guys have just discovered money after the war!!
Report to administrator
0 #6 Wante Martino 2022-08-05 07:39
Mr. President, STOP Fooling us, YOU, and only YOU are the one giving out these Wetlands to the Chines saying they are "Investors", the Lwera Issuance was your Child, Mukono and Luwero were Commissioned by your Ministers, next, we shall bring these Chinese to Rwakitura!
Report to administrator