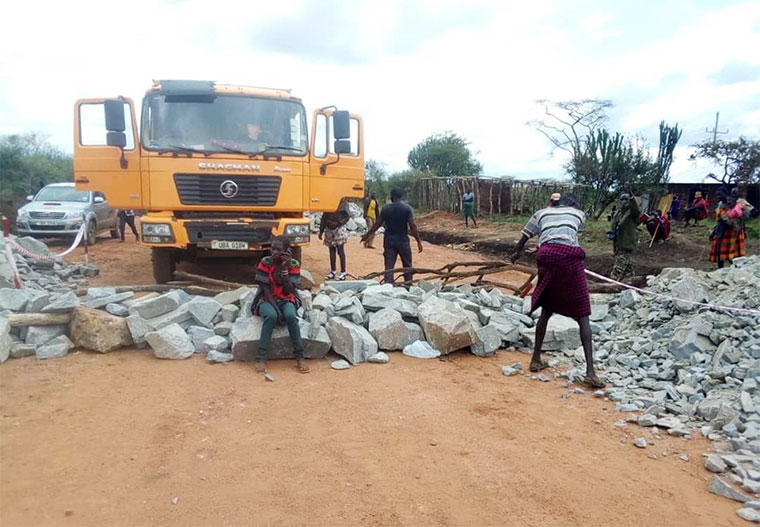 Angry residents on Sunday blocked Lokitanyala–Kitale highway in Moroto in northern Uganda for several hours in protest over delayed compensation by the government.

The locals blocked the road at the junction between Tapac trading centre and Kosiroi demanding compensation for the 42-kilometer stretch. Several trucks from the Tororo Cement factory were denied access to the Kosiroi mining site where they ferry limestone. The same road is also used to connect to Amudat district through Looro sub county.

Charles Tokon, a resident of Tapac trading centre says ever since they filled compensation forms early last year, they have not received any response from Uganda National Road Authority (Unra) and yet they promised to compensate them within a period of six months.

"Unra said they would pay us within six months but I’m wondering what is happening because they are not communicating and now we are under pressure because our landlords are demanding money," explained Tokon.

Tokon said they are just tossed around whenever they try to raise the matter before Unra officials. Emmanuel Lorot, another resident, says the delays in payments are going to affect the road construction project because they are not willing to allow the works to continue before they are paid.

Lorot said the roadworks have left their gardens, homes and trees destroyed but Unra is delaying giving them the money that they would have used for constructing somewhere else. Robert Lomongin, whose house was destroyed, urged the government to consider the skyrocketing prices while valuing their property for compensation.

"Prices for building materials have increased and we may not be able to replace our houses, so we hope Unra is considering that too," he added.

John Achia, the Tapac sub-county chief said the affected persons were told to go and rent as they wait for payment which was expected in about six months from December last year. He attributed the delays in compensation to the government processing of finances that requires the system upgrade since it’s a new financial year.

According to him, the affected persons will be paid as soon as the government is done with the issues of accountability. He urged the community to be patient and allow work to continue as they wait for the government's response to their concerns.

Eng Benjamin Enyuku, Unra deputy resident engineer admitted the delays saying they had assured to pay the affected persons within the period of six months but unfortunately some changes have affected the process.
Enyuku says the affected people were asked to provide their details for compensation and everything was approved and only awaiting government action. He said the locals should not worry because the government is ready to pay their money after working on a few

Enyuku said they will be meeting the affected persons this week to have all the concerns addressed amicably to avoid any protests from the community soon. The construction of a new highway linking Moroto to Kenya is being upgraded to bitumen II grade and the contract is an extension of the job done on the Soroti –Katakwi-Moroto road section at a total amount of Shs 646.8 billion.