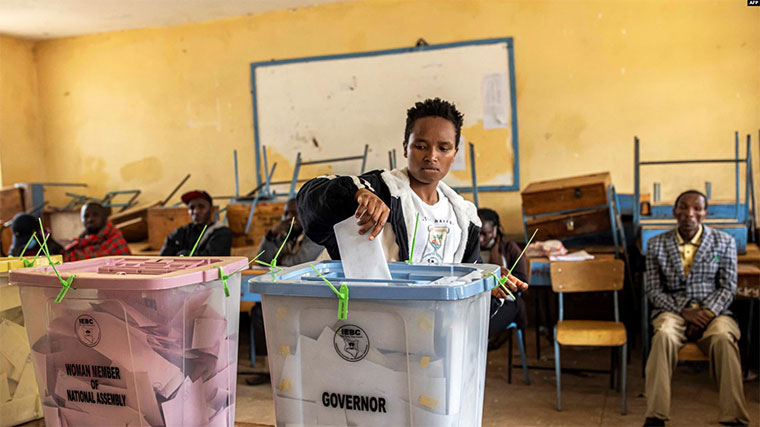 Kenya’s electoral commission says all 46,232 polling stations opened Tuesday for voters to cast their ballot for the six elective posts, including the president.

As Kenyans trooped to the polling stations, there were some reports of irregularities. Shortly after the opening of the polls, the election of member of parliament in the Rongai constituency in Nakuru County was suspended because of errors in the ballot papers.

Residents barricaded roads and lit bonfires to express their dissatisfaction with the electoral commission order. The suspension is the fifth, after voting for four other MP seats was halted over errors in the voting papers. Some voters across the country reported biometric voter registration was not working or taking a long time to identify the voters.

The voter identification system in central Kenya could not recognize the fingerprints of Vice President William Ruto's running mate, Rigathi Gachagua. Gachagua was recognized by the manual voter's register and allowed to cast a ballot. Mwangi Kevin said he waited a long time to cast his vote in Nairobi.

"The process is good," he said. "The only challenge we had at the beginning was the waiting process, I think they opened around 6:30 am., so the waiting time for me was three hours, but as we moved in, things were working. The ballot boxes are well done."

Forty-four-year-old Rahab Kamau is happy with the voting process at her polling station just opposite the parliament buildings in central Nairobi. She said she never voted this early, but coming early helped a lot. In this election, she added, the IEBC officials are well organized. There aren’t many people and there is less confusion if voters check the system a the polling station.

Kamau believes her vote will change her life and that of fellow Kenyans. She said she hopes the country will get a God-fearing person who can help the country. We want a leader who can help us reduce the financial burden, the cost of living and lack of employment, she said.

There are 22.1 million Kenyans registered to vote in this election and Tuesday’s vote will bring a new government. Voters are selecting a president, governors, senators, members of the national assembly and local country representatives.

Four candidates have been cleared by the electoral agency to run for the presidency. Deputy President William Ruto, former Prime Minister Raila Odinga, Root Party candidate George Wajackoyah, and lawyer and minister David Mwaure Waihiga are in the race to replace President Uhuru Kenyatta as the country's fifth president.

Security is beefed across the country to ensure the peaceful running of the elections.

"Our main concern is the security of the polling stations, election officials, polling materials and the environment around the polling centers and later the tallying centers," said Kiprotich Saidi Mohamed, the officer in charge of security operations in the Nairobi region Kenya police. "We have deployed enough security not only at the polling stations but within the city as a whole to ensure that everything goes smoothly.”

This is the seventh general election since multiparty democracy was established in 1992.

Despite the reports of some irregularities in the early hours of voting, the process appeared to be going smoothly as many Kenyans hoped for no repeat of the violence that marred some of the country’s polls in the past.

To win the presidential race, a candidate must receive more than 50% of the vote. If there is no clear winner, Kenyans would return to the polls for a runoff election.