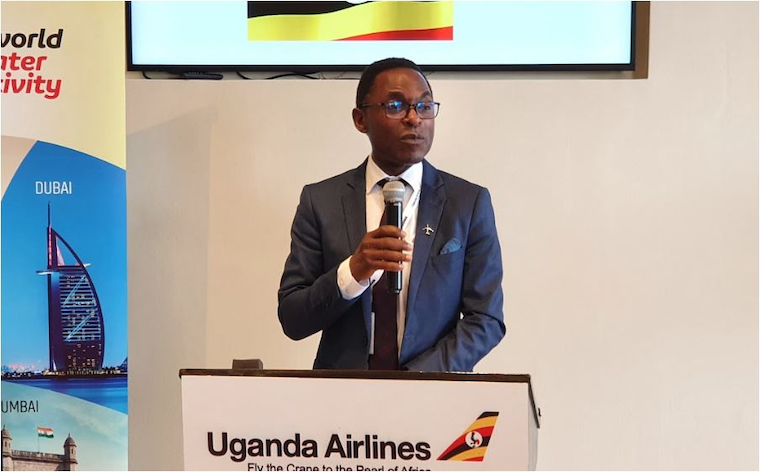 Police have finalized inquiries into the alleged offences slapped against Cornwell Muleya, the former chief executive officer of Uganda Airlines by the Inspectorate of Government (IG).

State attorney Rogers Kinobe disclosed this when the matter came up Wednesday before the Buganda Road court grade one magistrate, Fidelis Otwao. Kinobe informed the court that police investigations into the matter are complete and they are ready to commence trial once allocated a hearing date.

Otwao adjourned the case to August 31, 2022, for the hearing to commence and directed the prosecutors to come with witnesses.

Trouble for Muleya started on May 23, 2022, when the Inspectorate of Government summoned him to provide documents regarding the alleged mismanagement of public funds, procurements, and recruitment of staff at Uganda Airlines.

He failed to show up without any justifiable reason prompting the IG to arrest him on June 22, 2022, for disobeying lawful summons. He appeared before grade one magistrate,  Asuman Muhumuza who released him on bail.

On April 21, 2021, the Works and Transport minister, Edward Katumba Wamala sent Muleya and 12 other top officials of the airline on forced leave on the orders of President Yoweri Museveni to pave the way for investigations into allegations of financial mismanagement, collusion, and nepotism in staff recruitment among other issues.

In February 2022, the government terminated Muleya's contract, forcing him to file a complaint with the Wakiso district labour office on April 4, 2022, citing unlawful termination of his contract. However, the labour office referred the matter in which, Muleya is seeking more than Shs 3 billion to the Industrial court.

+1 #1 Zaitun 2022-08-11 19:24
Rubbish! The so-called State attorney Rogers Kinobe and the Works and Transport minister, Edward Katumba Wamala are just fumbling to find ways out as to how they will get out of the problem they have created leading to the sucking of Mr Mulema.
Is he a Ugandan to practice nepotism in recruiting workers? In any case, is nepotime new since Museveni grabed power by force?

Simply tell us that since the man wanted to make the company perform like all other other world Airline Companies, and since it would be difficult for you to send your family members abroad freely, the man's head had to fall.

Now you are looking for excuses as to how you would diminish this man as a responsible officer. Ugandans I know, who were active govt. officers must really be choking with laughter at your idiocy.
What a country run by lunatics whose only pleasure is to humiliate hard working people!!!
Doing no hard work but sucking people's blood is all you are proud of, ticks!!
Report to administrator
+1 #2 kabayekka 2022-08-12 08:35
Zaitun you have a point. Much of the public who are paying high taxes and seeing such revenue disappear into thin air have a suggestion to make. Such a VIP in the management team deserves listening to in court.

And he should be able to talk and shame the unfairnes being put on him. If he is the one guilty, a doctor should be called in court. A finger should be cut off from his arms.

He should be able to record to the judge those who facilited his corruption for their trail. And if guilty, their fingers must also be cut off.

And such culprits must stay put on their expensive jobs until they pay back all the lost government revenue in their big offices! If they repeat their constant well paying sins not again? Well more fingers must be cut off.
Report to administrator
0 #3 kabayekka 2022-08-12 08:45
Such a Memorandum of Understanding by the tax payers of this country and the civil service need to be negotiated and formulated by referendum as soon as possible so that the judges can acquire such powers to stop this state corruption that continues unabated for now many years and counting.
Report to administrator