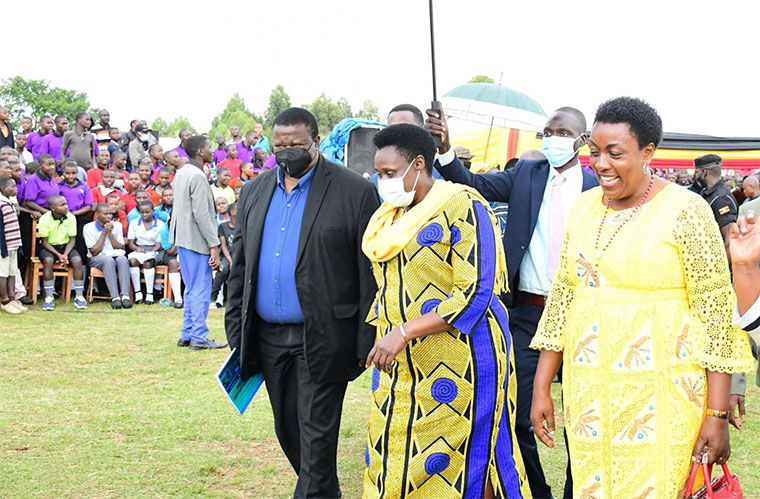 On Saturday, the ministers attended the belated Mitooma District Youth Day celebrations at Bubangizi secondary school playground, which were held under the theme "Unleashing the Potential and Role of Youth in Nation Development."

Museveni, 78, has ruled since 1986. In 2026, he will be 82 years old. In perhaps the clearest indication that Museveni will run again in 2026, Justice Minister Norbert Mao told youths in Mitooma that the president assigned him the task of organizing a consensus for transition in Uganda starting 2031.

According to Mao, the transition will be in three phases; consensus, endorsement and implementation of what will be agreed upon.

"I appeal for your support people of Mitooma and I know Gen Otafiire will support me in a bigger assignment that President Yoweri Museveni has given me to organise consensus - that is what we need. The transition will be in three phases. Phase I is the one we're on, phase II is the one I saw you people signing on although some signatures are not clear. Phase II is to implement what we have agreed upon. I believe by 2031 we shall have a new Uganda...Keep yourselves healthy so that you're there [ in 2031]. Uganda will be built on the dreams of the young people and I'm here to challenge you to dream big. Know your value. It is not about where you're from, it is about where you're going," said Mao.

It remains to be seen what effect the 'endorsement' will have on Gen Muhoozi Kainerugaba's hopes of succeeding his father in 2026. He was already rallying young people across the country to back him in 2026.

Muhoozi had used the excuse of his birthday celebrations to tour the country and garner support for his presidential campaign until they were abruptly halted. Alupo stated that the endorsement issue will be brought before the ruling NRM party's central executive committee (CEC) first for consistency.

"What we have signed today is already supported by the 70% of Uganda's population and therefore we other segments now, elders, women will just come to reinforce in order for us to achieve success in 2026. We shall table that matter before HE the president and before CEC so that there is uniformity and there is also an agreed position," she said.

"I know that many of you have been taken through ideological training. That ideology should be speaking out in your mind all the time. Youth of Mitooma what is your ideology, Ankole what is our ideology? I would like you to be mindful that what you're known for, what your plans are, what you wish to do. How you conduct yourself with others as a team is what exemplifies your ideology. I would like to encourage you to recognise the fact that youth is just a transition. You're a youth today, you will be another category of person tomorrow. And that category of person you will be tomorrow, maybe now me now, maybe honourable Otafiire or someone else. So let's work in harmony regardless of age," added Alupo.

Otafiire used the occasion to warn the youth against fights that are based on religious and ethnic grounds which can destroy what has been set by the NRM government. Otafiire said that the youth should not be driven by the forces of change but rather fight for the right cause, rejecting negative philosophy and avoiding fighting wars of ethnicity and religion. He instead urged them to avoid conflict but sit down to resolve it and learn to emulate the good examples of current leaders.

Where as the rulers demonstrate physical fitness, suffering from over-weight, I pity the gathering of men and women, especially the man carrying the umbrela, and wonder from what he is protecting that woman from; not talking of the lanky guy in blue trousers.

Why can these thieves not have mercy of poor Ugandans, and up to when would they want to humiliate them? And yet these suffering people will proudly come tp vote for these good for nothing thieves!

But I wonder whether Obscurantist and Sycophantic VP Afande Alupo, ever heard about how during one of his Sectarian Banyakole Caucuses meeting; Gen Tibuhaburwa made degrading and humiliating statements about Gen J J Odong and former VP Specioza Kazibwe (Courtesy of John Kazoora)?
Report to administrator
+4 #14 Lakwena 2022-10-04 10:22
Quoting Wainanchi:

Please include also myself Wainanchi,
I want to sign also as one of the first supporters together with my good and longtime friend Afande Otafiire and others who fought with Mzee Museveni for the liberation of Uganda. ...

But Wainainchi, where were you on 26th Jan 2017, when Gen Tibuhaburwa finally spoke his hidden mind and told off Ugandans that he is not their servant or employee?

Except the criminality of killing thousand of innocent Ugandans and destroying their livelihood in order to liberate himself from abject poverty and refugee camp; how can someone who tells the country that he has no friends and not their servant nor employee liberate anybody, and from what?
Report to administrator
12