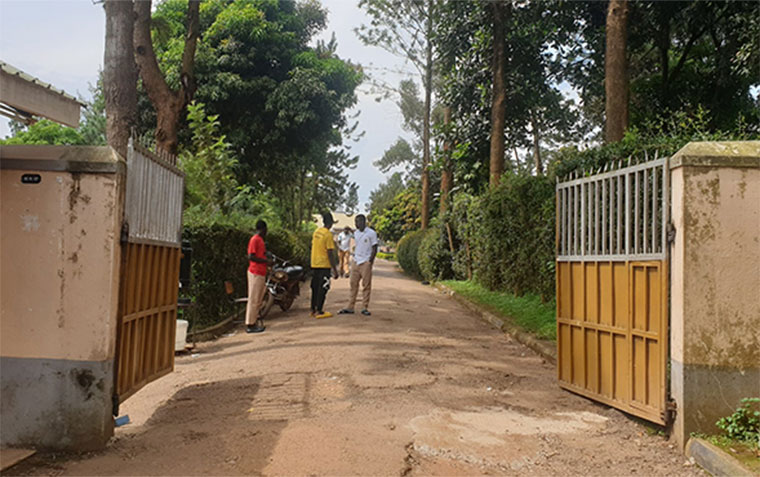 Kawanda SS gate where Ronald Waliggo was shot dead at

The Chieftaincy of Military Intelligence (CMI) has arrested a Uganda People's Defense Forces (UPDF) soldier, Abdul Ssali after he allegedly shot dead a boda boda rider at the gate of Kawanda secondary school in Wakiso district on Friday in a road rage.

Luke Owoyesigyire, the deputy Kampala Metropolitan Police (KMP) spokesperson identified the victim as Ronald Waliggo, 38, who was riding a motorcycle registration number, UEG 721C. Upon arrest, Ssali allegedly claimed he shot Waliggo in self-defence because other boda boda riders wanted to lynch him.

According to eyewitnesses, it is alleged that Ssali and Waliggo got into a misunderstanding when Ssali driving a military vehicle, a Land Cruiser reg no. H4DF 1939 was leaving the school premises after picking up his senior three student. Due to the Ebola outbreak, the government ordered schools to close the third term earlier on November 25.

Eyewitnesses say that while leaving the school, Ssali met a number of motorcycles and cars at the gate. The road being narrow prompted him to squeeze into the side where the deceased had parked.

This caused an altercation after Waligo complained to the driver about being squeezed which attracted a big group of riders that also condemned the driver’s actions. Soon after, Ssali entered his vehicle and picked up an AK-47 rifle and shot at Waliggo, killing him instantly. Ssali later sped off from the scene. Owoyesigyire says that they were able to identify the number plate of the vehicle as H4DF 1939 with the help of CCTV cameras.

According to Owoyesigirye, Waligo was shot in the left shoulder and the bullet came out from the right shoulder. He says that the police will liaise with the UPDF to help identify the driver.

He can't claim self defence because he went to his car, got a gun and returned to confront the body body guy that he shot. He should have driven away. There was room for him to drive back into the school.
Report to administrator
+1 #2 kabayekka 2022-11-26 12:38
Well these are the lucky officials who have made it as a right to carry arms. And to use them as the African police use them to threaten and even kill the unarmed African civilians at any time.

Ironically the political NRM officials obtained such rights to arms by stealing these same killer arms from several previous governments. Unfortunately for many citizens of this country, such dodgy rights to arms was initiated by British colonialism with the excuse of protectionism. Against what? God knows what?
Report to administrator
+8 #3 A K Mukasa 2022-11-26 13:11
Senseless killing of civilians reminds me of the last days of Obote 2. Indeed nothing has changed and things have simply got worse.

Same script different cast. The entire system is to blame for these senseless murders. Many of these security men have either witnessed or have first hand information of extrajudicial killings carried out by this government in order to suppress anti government forces.

This has become a culture within the security forces so when one gets involved in any kind of misunderstanding no matter how trivial they resort to extreme violence. These thugs came into power on the back of many dead civilians so one more is not a big deal. So although it was the individual who carried out the killing, it is the environment of impunity and violence against civilians instigated the NRM/NRA that is responsible for the deadly attack.
Report to administrator
+2 #4 Lakwena 2022-11-28 07:57
In other words, 36 years and counting, Uganda is in a permanent state of emergency (War).

It is a country whereby, although the AK47 is a deadly assault rifle (combat weapon) that should be in the Armory under lock and key, but in Tibuhaburwa's Uganda; it is a permanent fixture in the hands of poorly trained, LDU, the Police, the Military and marauding criminals.

It is a country where there is no difference between the Police (Civil) and the Army (Military). Simply because, on a daily basis, in their different shades of camouflage uniform, they all move on Machine-gun mounted Battle Wagons and/or Armored Personnel carriers.

Uganda is a depressing country where e.g. the president knows who, in cold blood murdered innocent citizens like Yasin Kawuma and Boxer Zibra, but nothing is done about it.
Report to administrator
0 #5 kambarage 2022-12-06 04:04
This guy was threatened by a crowd of bodaboda guys and he reacted cowardly. Bukedde paper interviewed him extensively and that was the situation.

The offending rider mobilized his boda boda colleagues to manhandle the driver and that's where the problem arose. Unfortunately the driver saw it as a threat to his life and claims self defense.

It was really unfortunate that he did not just shoot in the air. The guys would have dispersed and left him to drive off. Losing life so cheaply like that is a shame
Report to administrator