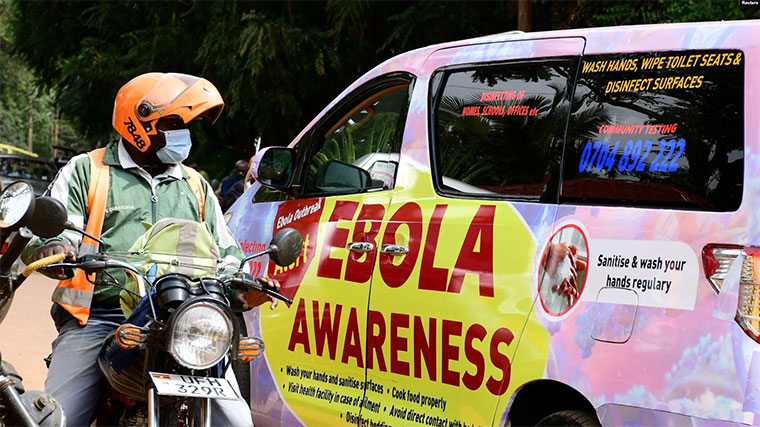 An Ebola Awareness van drives along Kyadondo Road amid an Ebola outbreak, in Kampala,

President Yoweri Museveni has extended the quarantine placed on Mubende and Kassanda districts, the epicentre of Uganda's Ebola outbreak by a further 21 days.

According to Museveni, although the country was registering progress against the outbreak that has already claimed 55 lives and recorded 141 infections, it is not yet time to put the guard down.

Kassanda and Mubende were first placed under a 21-day lockdown on October 15 following the declaration of the outbreak on September 20. The lockdown aimed at blocking the spread of Ebola virus disease to densely populated areas in Kampala and Wakiso was further extended on November 5 and now until December 17.

The lockdown measures include a 7 pm-6 am curfew, a ban on public and private transport, private transport, suspension of seasonal markets, closure of worship places and social places like bars and gyms. Also, all burials in the two districts must be conducted by only the safe burial teams irrespective of whether the cause of death is Ebola or not.

In a statement read by vice president Jessica Alupo on Saturday, Museveni acknowledged the pain and the inconvenience caused by the restrictions but insisted that had they allowed the escalation of the outbreak into Kampala, the consequences would have been bad, including possible exportation of the virus to other countries.

He said the Ebola "situation is still fragile," and that he's aware of the challenges of a weak health system, myths, misinformation, and belief in witchcraft coupled with a single incident of exhumation of a dead body that resulted in a flare-up of cases.

The Ebola virus circulating in Uganda is the Sudan strain, for which there is no proven vaccine, unlike the more common Zaire strain, which spread during recent outbreaks in the neighbouring Democratic Republic of Congo. The extension is "to further sustain the gains in control of Ebola that we have made, and to protect the rest of the country from continued exposure," according to Museveni.

"It may be too early to celebrate any successes, but overall, I have been briefed that the picture is good," he said.

Museveni said that the government has been able to stop the further spread of the virus in the districts of Masaka, Kyegegwa, Bunyangabu and Kagadi and that the Health ministry swiftly handled Jinja where more than 300 contact persons were listed and put under institutional quarantine.

According to the president, it is now 14 days since the last case in Jinja district and no other cases have been registered from those areas but those in quarantine must complete the 21 days for the health workers to be sure that they are free of Ebola.

Statistics from the Health ministry show that a total of 6 confirmed cases are still admitted and receiving treatment - 5 at Mubende and another at Entebbe Ebola treatment unit. After nearly 2 months and one week response, Museveni said the government has registered success - with the 3 districts of Kagadi, Bunyangabu, and Kyegeggwa now retired from the follow-up list having completed more than 42 days since the last case of Ebola was reported, coupled with no further spread while Mubende, Kassanda, Kampala, Wakiso, Jinja and Masaka which are still under follow-up.

Museveni also said that there are districts with imported cases, with secondary transmissions such as Wakiso, Masaka, Jinja and Kampala and that they continue to register progress in control of the outbreak as observed by the number of days since the last confirmed case was registered.

He observed that Mubende and Kassanda districts have also made good progress and did a very commendable job in controlling the disease and its spread except for the one case registered in Mubende on November 13 after the district had gone 15 days without reporting a single case.

Why is there no LEADERSHIP to call for an end to the inhuman divisive tribalistic system of rule Museveni put in place & call for UNITY of Ugandsans?

Who are those ensuring Museveni's lifetime rule & family business that Ugandsa is by being happy;

Why have Ugandans locked themselves with Museveni & family for good?
Report to administrator
+1 #2 kabayekka 2022-11-28 17:10
One cannot envisage the success of stopping the spread of Ebola in the East African region. Especially when the country is right in the middle of countries torn by never ending civil wars.

Uganda as a country is also at it refusing to practice credible and harmonious democracy. Much of the country's economic resources are spread out externally and internally to augment political ambitions and one only needs to look at the conditions in which the health personnel are toiling in to understand the dangers Uganda is faced with.
Where exactly are the medical research stations for this country to recover from all sorts of disease attacks. Are presidential territory lockdowns the only solution to disease control in this country?
Report to administrator
+1 #3 Lysol 2022-11-28 21:32
Then why did he close the schools earlier? The old dude in a big dumb hat is contradicting himself.
Report to administrator
0 #4 Akot 2022-11-29 14:26
kabayekka, agree!

But Uganda is a total military dictatorship!

Ugandans MUST give themselves chance & all they have to do are;

- NO to the tribalistric system,

- UNITY to block & force Museveni out!

Why wait for next fake presidential election that will ensure Museven's 45 years in power, then bolster, protect him with useless parliamentary & local elections?

But The old dude in a big dumb will rule for life & we know demons like him live + 90 years, unless UNITY of a people force his out!

Museveni is protected from all sides by Ugandans & no outsider will say a word against him as long as our people go along with the tribalistic system of rule that goes against international principle!

But as UNITY won't come & tribal leaders hold on to Museveni, Ugandans MUST form indepedent tribal states that will shut Musveni from every tribal land!

Is there any reason Ugandans let Museveni rule for life & his son replaces him?
Report to administrator