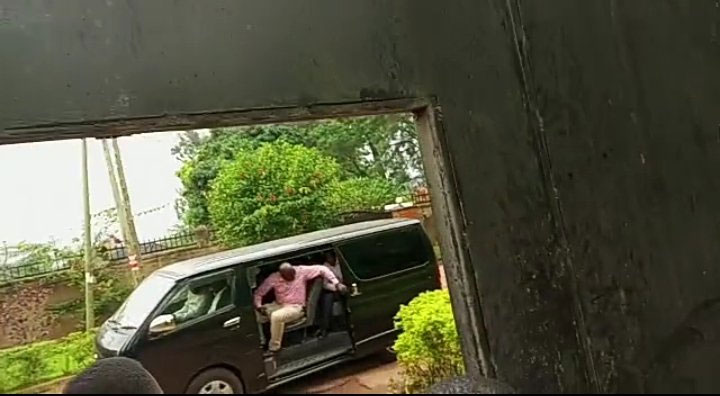 "They told us he was being taken to the Criminal Investigations Directorate, CID. We followed him at CID but shockingly we were informed that they don’t have him. So currently we don’t know where exactly he is being held,” Matovu said.

Video footage from the CCTV camera at Kabuleta's office shows about six plain-clothed men entering the office building. Four of the men approached Kabuleta who was chatting away with two other men and exchanging pleasantries.

They asked him to escort them while one filmed what was happening using his mobile phone. One of the men could be seen picking Kabuleta's mobile phone before they led him away. The arrest comes shortly after Kabuleta addressed a press conference where he spoke about the recent attacks on security installations and theft of guns in the country.

“We have security issues here, a lot of uncertainties going on here, the president should come out and address the nation on these insecurity problems that are propping up in the country instead of travelling to Vietnam, USA, claiming that he is attracting investors, who can invest here with this uncertainty around?" said Kabuleta before his arrest.

He said the Ugandans should be told whether there is a rebel group that they should be worried about or an insurgency in the East African region.

"These are the issues that we want tackled and now the president should come and tell us. Is there a rebel group that we should be worried about?...[do we have an] insurgency within the central region? If that is the case then they should tells us because we're tired of something being consistent. They attack this situation...now they have attacked this station and there is a consistency going on and yet there is nobody actually addressing it. Not in government, not in opposition, nobody seems to be saying anything about it. And it is a big problem, the elephant in the room. So this is what we're trying to address here today that we have a serious security problem going into this festive season and then police is warning people about driving safely, we have bigger issues than driving safely and ebola. Who's stealing guns?" said Kabuleta.

On November 4, the CID commandant summoned Kabuleta for questioning in vain. According to the police summons, Kabuleta is accused of making tribal-based comments on May 30, 2022. Kampala Metropolitan Police spokesperson Patrick Onyango declined to comment on the matter and referred our reporter to police spokesperson Fred Enanga, whose phones were unavailable.

In other words, Gen Tibuhaburwa is busy globe trotting, pursuing his personal and family businesses interest at our expenses and/or risk.
Report to administrator
+2 #2 Lakwena 2022-11-29 09:57
Otherwise, and at this rate, since they (Amin and M7) both ascended to political power through bloodshed on 25th Jan 1971 and 1986 respectively; the Demons that rode on the shoulders of the notorious Amin's State Research Bureau Agents of kidnap, torture, terror, disappearance and murder, have hooped onto the shoulders of Gen Tibuhaburwa Hatchet-men to continue doing the same.
Report to administrator
+3 #3 Tuhaise 2022-11-29 11:52
God save us from this kiman.
he is picking one by one like we are beans
Report to administrator
0 #4 Kalibbala 2022-11-30 01:19
Ever Heard about one Teddy Seezi Cheeye ? He Wrote some Analysis about The System NRA (Notorious Robbers Army). Sat 10 Years in Luzira When Released got Knocked Down by Unknown Flying Boda!These Kabuleetas ,Tamale Mirundu and All other Trumpets are Used but at One Time

Spill The Beans! Tibuhaburwa Son of The Gun You are The Only One Creating This Insecurity Like You used to Do in the 80ties With Matayo Kyaligonza Driving that Leyland Bus From Kololo Summit Terrorizing Kampala making the Then Governments Unstable!!

You Seem To be Cornered ! You are Out Of Lies! Your Problem is that This Generation in Rabadaba ! None of Them is Buying your Stunts ! Tell Tumukunde to Retire!
Report to administrator