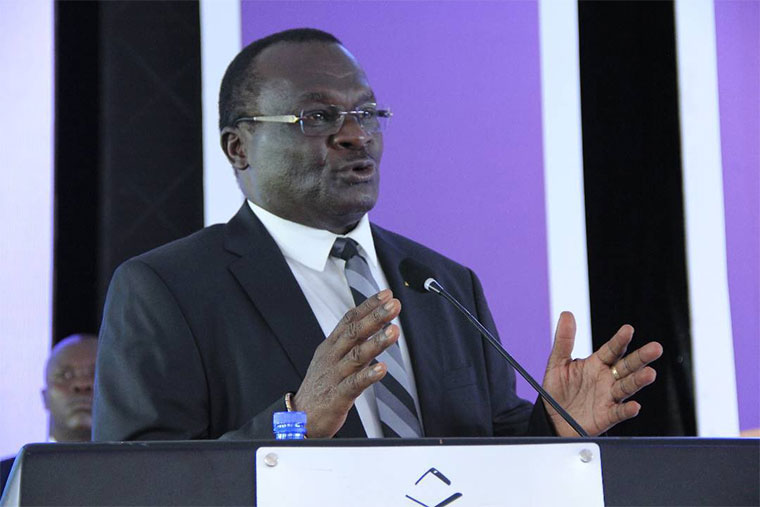 Chief justice Alfonse Owinyi-Dollo has asked Prime Minister Robinah Nabbanja to put to use her excessive energies on other issues affecting the citizenry other than interfering with the work of the judiciary.

Speaking on Monday afternoon at Mestil hotel in Kampala while opening the Annual Registrars and Magistrates’ Conference, Owinyi-Dollo went bare knuckles in responding to the actions of Nabbanja, who, last week stormed the Mengo Magistrate court and grilled a grade one magistrate Amon Mugezi.

Magezi had ordered for the imprisonment of a widow of seven children due to a land dispute that had been decided ex parte. Amidst thunderous applause from the judicial officers, Owinyi-Dollo said Nabbanja’s actions are unacceptable in a country that has a constitution that recognizes the judiciary as one of three equal but independent arms of government.

“The judiciary of Uganda will never be intimidated under my watch...I also want to commend the Rt. Hon. Prime Minister for her zeal except that this time it got misplaced," Dollo said attracting a standing ovation.

"We hear Isimba dam was closed just after two months of its commissioning…, there is no reliable power in Gulu and Arua; that’s where she should exercise her zeal. Whenever I go to the village, some people come to me to give them money to buy medicine in the pharmacy, the prime minister must be concerned…, that’s where the zeal should be. At a personal level, the prime minister is a very good person but she misdirected her efforts.”

He added that he would be failing in his duties as chief justice if he didn’t speak out forcefully against the actions of Nabbanja and defended his judicial officers.

“I would be failing in my duty if I see this kind of abuse and I keep quiet," he said. "Don’t be intimated by whosoever who comes to your court because we take an oath not to favour any person… I believe in harmony; I will take it that my sister slipped. If she is a litigant in your court tomorrow, do justice to her but the rest we will sort it out administratively. I thank the Attorney General who has got in touch with me to find a solution but the judiciary under my watch, we will not be intimidated,” Owiny-Dollo attended.

He asked the assembled judicial officers not to be intimidated by anybody while they carry out their constitutional duties. He said even when they err, there is an appeal mechanism that the constitution has set out in which that error can be rectified.

He however called upon the judicial officers to stay away from actions that tarnish the reputation of the judiciary. He said if anybody is caught outside the ambits of the law, he would not hesitate to call for his or her sacking.

“If you behave in a manner that is not becoming, I will apologize to the people of Uganda but I will see your back and that one is non-negotiable. It’s so difficult to join the judiciary, please, nobody wants any judicial officer to leave the judiciary unless when you beg us by doing things that are non-excusable. People will always accuse you but if you do the right thing, don’t fear those accusations. You will only fear these accusations when you know you have done the wrong thing,” Owiny-Dollo said.

On his part, Mugezi, the magistrate who was ostracized by Nabbanja, thanked the chief justice for standing with him in his hour of humiliation.

In the past, President Yoweri Museveni has also openly criticized Uganda's judicial officials for making decisions that are inconsiderate of the plight of the people. He warned earlier this year that the executive will continue to disrespect court orders that are not in tandem with the rights of the majority of the people. Some commentators say the current interference is self-inflicted after the judiciary allowed the state to use it for political persecution in the past.

Meanwhile, the chief justice said he is elated by the increase in the number of judicial officers across the country. He said before the expiry of his tenure, he will have ensured that every constituency has got a grade one magistrate and every district and division has got a chief magistrate. He added that they are going to open up new High court circuits in districts such as Kitgum, Apac, Katakwi, Lyantonde, Kasese, Bushenyi among others, expand the Court of Appeal and Supreme court from 15 to 56 and 15 to 21 justices respectively.

“We are not there yet but when I see these numbers, I see people who have the capacity to make a difference in the administration of justice, we fought for and had a meaningful improvement in our budget and we want to achieve a meaningful transformation of the judiciary…Access to justice has got two ingredients; we must create stations where the people seeking justice will go but also what matters more is the software who are the people. You can have a court building but if the software is not effective, we would have given our people false hope,” Owiny-Dollo said.

Every year the judiciary holds two conferences; one for the High court, Court of Appeal and Supreme court judges and the other for the lower judicial officers.

12
+3 #11 Webz 2022-11-29 11:36
PM Nabanja should, as a big person in government, learn how to approach issues. It's not a matter of bossing officials in their various disciplines. CJ Dollo has his own sins, though.
Report to administrator
+7 #12 Olum S. 2022-11-29 12:32
I wasted a few valuable minutes I will never get back, by reading Owiny Dollo’s totally nonsensical utterances.
Report to administrator
0 #13 Ndugu 2022-11-29 16:31
There seem to be one or rather two certainties in Uganda, save for the obvious. That is, that night follows day and that this thug-like pretense of a CJ, Dollo's conduct virtually always falls beneath the barest standards of decorum.

A quick search will arouse one's mind to the deliverer the PM was to the poor widow laden with 7 orphans against a loan shark conniving with a magistrate (as is always the case). I'm no fan of African politicians; but boy, the PM delivered justice.
Report to administrator
0 #14 Loveuganda 2022-11-29 16:38
Cannot stop laughing. Nabbanja should stay in her lane. Village mate still excited.

Let her enjoy the ride while it lasts. Owiny lost his creditability in the eyes of Ugandans long time ago. Museveni fishermen.
Report to administrator
0 #15 Akot 2022-11-29 18:11
Quoting Olum S.:

I wasted a few valuable minutes I will never get back, by reading Owiny Dollo’s totally nonsensical utterances.

How can he let us believe there is justice in the shithole that is paradise for Museveni but hell for Ugandans?

Ugandans spit, terrorise, toture...one another & get payed for their inhumanity towards their own!

Where is that just ONE National Leader so so needed, to call Ugandans to say NO to the divisive tribalistic system & to UNITY, the ony actions needed, if our people want Museveni & family out, then form the kind of governance they want?
Report to administrator
0 #16 Akot 2022-11-29 18:13
Webz, agreed!

Ugandans MUST stop Museveni in UNUTY, or they will be enemies fighting one another for good, while Museveni & family owns the fake country that is their family business, yet, we still stupidly believe that our tribal lands belong to us, when all belong to Museveni & family!
Report to administrator
0 #18 Akot 2022-11-29 18:22
Ugandans,

Why are tribal leaders still in posts & you go along, just ensuring you are powerless against Museveni?
Report to administrator
12