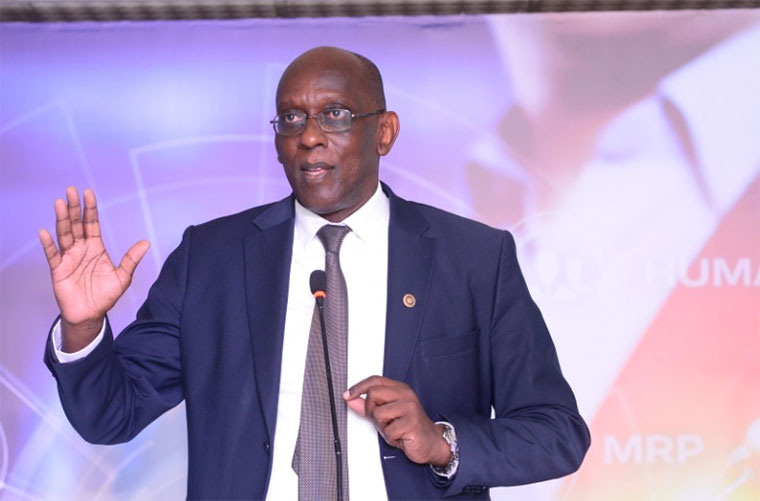 A bitter land row is threatening to spill out of control after recent clashes between several residents of Ziranumbu village in Kigo, Wakiso on one hand, and another group led by former minister and now Presidential Advisor on ICT Ham Mulira.

The contested land sits on about 12 acres and is claimed by Ham and his brother Peter Mulira, a senior lawyer. However, residents led by Ambassador Kintu Nyago maintain they are the bonafide owners of the land and have petitioned the Inspectorate of Government (IG), judiciary chief registrar and inspector of courts to investigate Ham Mulira on allegations of intimidation, forgery of court documents and bribery of judicial officers.

Reached out for a comment, Ham Mulira said the court order is genuine and “encroachers should leave the land.”

“That man [Nyago] is simply clutching at straws. “How can you occupy 90 per cent of our land and claim to be a kibanja holder? He has no single document to lay claim on the land. He has moved to every office, including police, the RDC as well as the presidential task force on land matters but they have all chased him away. His only solution is trying to spoil our names in the public,” said Mulira.

The battle entered a critical phase on November 26 when court bailiffs from Dak & Co. Associates led by Ronald Ainebyona attempted to forcefully evict some of the residents. For years, Ziranumbu was a sleepy village but ever since the construction of the Entebbe expressway, it sprung to life and has become one of the fastest growing suburbs on the outskirts of Kampala.

According to court documents that The Observer has seen, row on the land dates back to 2008 when the administrators of the estate of Eldad Mulira [Sarah Mulira, Peter Mulira and George Kasedde Mukasa] sued 12 area residents for trespassing on the land [Civil suit 278 of 2008]. The suit against 12 individuals indicates the contested land is Block 260 Plot 21, which became Plot 35 and now Plot 143.

Sarah Mulira and George Kasedde Mukasa have since passed on over the past one year. The 12 accused individuals include Maliko Bityo, Steven Lutwama, Misayiri Nsubuga, Steven Mutebi, Guste Balikunzira and Willison Male. Others are Deo Kironde, Francis Lubuulwa, Yosefu Kyabasinga, Nalongo Eseza Ssendaza, John Kasenge and a one Tebitundwa. A letter from the area LC I of the village noted that nine of the respondents were deceased but court went ahead to hear the suit ex-parte and in September, it ruled in favour of the Muliras.

In a separate 2012 suit on a different piece of land within the area, Sarah Mulira sued four people including Kizito, ambassador Kintu Nyago, Patrick Kasirye and Patrick Tumwizere for trespassing on Block 260 Plot 94.

In 2018, Justice Cornelia Kakooza Sabiiti issued a temporary injunction to maintain the status quo on the land until the final determination of the main suit. Incidentally, Ham Mulira is not a party to this suit. Since then, The Observer understands there have been efforts from both parties to solve the matter amicably.

In a confusing twist, the Land division deputy registrar issued an order on September 19 directing the 12 individuals cited in Civil suit 278 of 2008 to vacate the land on Block 260 Plot 94.
It is at this point that the chaos started. According to residents, Ham Mulira went to the scene to oversee the eviction but it took the effort of the police to diffuse a deadly scenario.

Nyago revealed there are two separate pieces of land and court could have been misled in issuing the order.

“It is obvious the registrar was misled to issue an order on a forgery because the two suits were mixed up,” he said. “That’s why we believe the inspector general of government (IGG) needs to investigate the case and the culprits be brought to book.”

However, Mulira insists plot (94) is also part of the original Plot 143. “So, any third party transactions that were made on plot 94 are null and void. Even the 2018 case was overtaken by events,” he said.

Why are Ugandans busy accusing, arresting, imprisoning...one another while Museveni loots, steals, controls every institution, wons tax money, is the only ruler & will leave the post to is son?

Why are Ugandans alright being slaves of migrant Museveni as right of birth?

What will tribal leaders/kids do when Museveni dies of old age & will the son replacing him need them in posts?

Opposition leaders will be so so evil if they lead Ugandans to next fake presidential election, knowing only Museveni is winner!

Museveni MUST NOT be legalised with next fake presidential election!

NO to the tribalistic system & UNITY NOW!
Report to administrator
+1 #2 kabayekka 2022-11-30 19:26
Ionically these are the hard core Ganda land lords who came singing the greatness of NRM and its Pan-African liberation. They laid the bed. Now as presidential advisors they need to lay on them beds!
Report to administrator
+1 #3 Apollo 2022-12-01 14:07
11 of the 14 litigants died before the case was decided!

I'm closely related to a case where 6 of 10 litigants are now deceased yet the case has not been determined in Court! If this is justice, then CJ Owiny Dolo should not feel offended when Ms. Nabbanja the Prime Minister intervenes to assist a poor lady.

These colonial practices should be called another name but not justice. There is great disappointment and disillusionment against denied justice arising from failings of a judicial system out of touch with the population.
Report to administrator