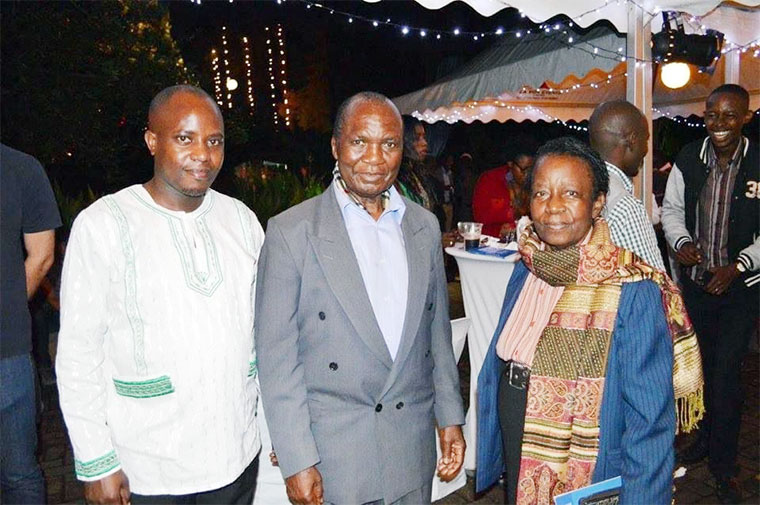 Dr Ssemogerere (C) with the wife Germima and the author

Tributes from political friends and foes alike have described him as a true statesman. A firm believer in the rule of law and non-violent politics, Ssemo’s political career spanned several decades and is well documented.

However, as he reduced his public appearances in recent years, little has been known about him but as Elvis Kintu Nsonyi writes, Ssemo remained convinced in strengthening of democracy and constitutionalism in Uganda through unity in diversity.

I came to learn of Dr Paul Kawanga Ssemogerere in 1996. Yes, I was in P.3 then at Stella Maris Nyendo, Masaka. I was moved by the mammoth crowd that followed him during the campaign trail as he proceeded to hold his Presidential rally. I innocently followed them chanting Ssemogerere Paul Kawanga he he he and, of course on return, I was meant to be punished but my mother was a staunch Democratic Party member and that is how I got exonerated.

I remember he was an old man as I recall his signature grey hair on his then black and white campaign poster. I fell in love with Truth and Justice that very day. I became politically vigilant. I first met Dr Ssemogerere for a lengthy one-on-one when we went to Kisunku in Kyotera for the golden jubilee celebrations of Fr Denis Mayanja with then MP Matia Nsubuga (RIP).

I realized that he always paid attention to detail. I had just read his book titled Political Party Financing published under the aegis of Konrad Adenauer Stiftung. When I became the capacity strengthening coordinator of DP, I worked with him closely when I superintended over the drafting of the alternative policy on proportional representation in Parliament.

Dr Ssemogerere could easily cancel his long planned appointment just because he wasn’t sure of who was to drive him, I had a chance to have him when I am behind the wheels that day and dropped him at the Kampala Serena hotel for the event. Others who have done it in the past include William Kamulegeya, Jude Mbabaali, Bazira Ssewanyana and Mzee Kyoloobi (RIP).

We continued to interact on several occasions but what was always mindboggling was the fact that the Dr Ssemo, as he was popularly known, that I met in 2010 was younger than the one I saw in 1996. Whenever I visited him, I was always humbled by the fact that he always walked to come and push that green gate by himself for you to get it. I had to always move with a notebook whenever I was to visit him.

There was a lot to learn from him and he was a true source of wisdom. During the visits, I always made sure I had about two hours and beyond with him and this was because the first 30 minutes of our meeting were always informal and spent sharing a few updates. He always called me to share a few things with me. This happened when I was executive assistant to the
DP president, when I was capacity strengthening coordinator and as the assistant to the lord mayor.

Of recent he was highly challenged by the physical development plan of Kampala and the noise pollution within the precincts of Lubaga, which he said inconvenienced the cathedral, presbytery, hospital, academic institutions and the few surviving residences.

He was always challenged by how certain individuals and institutions handled matters casually. For instance, one time KCCA severally sent him messages regarding payment of property rates. He summoned me and I explained to him that maybe that was done erroneously because it talked about a property located in Kansanga. He asked, “Is that so? Who does that? And he laughed...”

Those who have been close to him can paint a picture of that signature question, Is it so?, the laughter and smile. He last called me last month asking for a copy of his 1996 manifesto before I travelled to the United States and fixed an appointment this month, God’s ways aren’t not our ways.

He emphasized and respected appointments, even in the afternoons he would cancel his siesta to fulfill an appointment. I never saw his shirttails, he always tacked in his shirt even when you thought he was casual. He had a pen either hanging on his shirt or nearby and a notebook whenever we were to meet.

One time I went for a meeting with a notebook but I couldn’t find my pen, when I asked him to assist me with a pen, he laughed and advised that I should have more than one in this changing world, referring to their time.

When the Kabaka was pleased to extend a precious award to him, he decided to dedicate the same to the politicians in Uganda. He was convinced that this would have a positive punctuation in the process of rescuing, safeguarding and strengthening of democracy and constitutionalism in Uganda through unity in diversity. He identified lawyers Samuel Muyizzi and David Mpanga, who had not participated in elective politics, to form part of his secretariat for the Africana meetings.

Even up to the very last minute, Robert Kyagulanyi, Lord Mayor Erias Lukwago and others testify that he was still pursuing this. The biggest question is, why at that age? And my simple answer is, because he is the president Uganda never had.

He always recommended so many budding politicians to me for sharing experience and I was always glad to do so. I was honoured that as he marked his 90th birthday on February 11 this year, the family entrusted me to be part of the organizing committee as secretary. I vividly recall the first preparatory meeting we held at City hall and the positive response we received from Lukwago, Kyagulanyi, Dr Kizza Besigye, Mathias Mpuuga and so many others.

In synopsis, I am very lucky to have tapped from his wide knowledge of politics for a number of decades. I eulogize a statesman who has remained consistent and articulate even at advanced age. Many have lost a mentor, father, grandfather but I will compound that all and say I have lost a friend. We have lost a vanguard of rule of law, constitutionalism and good governance. A man who had a very sharp memory and used all his senses well. My condolences to his family.

E.g., even in very advanced age,their sense of memory were incredible.

Compared to our current lying and stammering, charlatans in public offices These gentlemen remembered events by date, time and names of participants. Binaisa e.g. used to brag that his head was not big for nothing!
Report to administrator
+1 #2 Akot 2022-11-30 14:20
Buganda & Acholi MUST NEVER forget Dr Paul Kawanga Ssemogerere, the only opposition leader Uganda ever had!

Let's pray he made his place with God, the one & only who takes everyone of us to the next step after death!

Museveni will die at + 90 years of age in office, then WHAT, go along with the son waiting to replace the dad in the Uganda that's their family business?

When will Ugandans wake up to reality?
Report to administrator