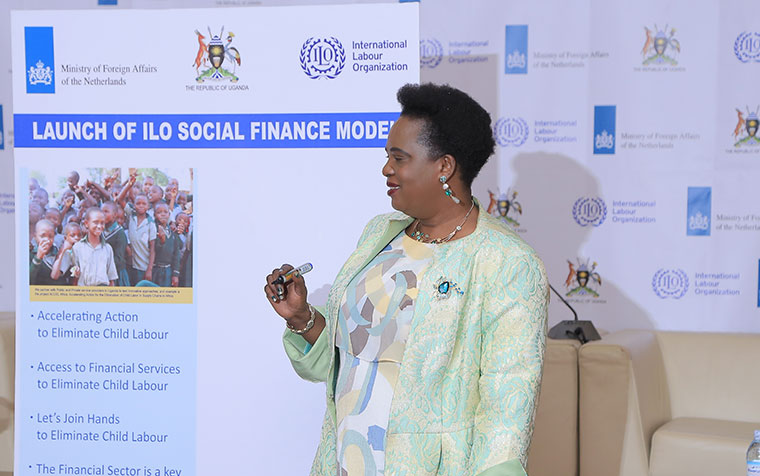 Over 73,500 people are set to benefit from Shs 88.8 billion Social Finance Model which aims at fighting child labour in Uganda.

A brainchild of the International Labour Organization (ILO), the Social Finance Model was launched by Betty Amongi Ongom, the minister of Gender, Labour and Social Development. Through accelerating action for the elimination of child labour in supply chains in Africa (ACCEL Africa), Social Finance Model will benefit the people of Kikuube, Hoima, Buikwe, Mbale, Sironko, Bulambuli and Kabarole districts.

According to the 2021 National Labour Force Survey (NLFS) which was released by the Uganda Bureau of Statistics (Ubos), a total of 6.2 million children aged five to 17 years were engaged in some form of child labour excluding household chores in 2020.

The largest share of child labour is prevalent in the agriculture sector where children are employed as unpaid family workers. At least 19.5 per cent of children in rural areas are engaged in child labour compared to 11.3 per cent in urban areas.

“The Social Finance Model is a comprehensive package of services whose design and delivery models put into consideration backstops to mitigate against unintended social risks of financial services including child labour,” he said.

Business models designed include operational structures, training of field agents, incentive schemes, communication to farmers, digital solutions as well as creating awareness of child labour amongst services providers, like those from the financial sector, to mitigate against social risks in their product design.

Chibebe said the project will support 32,000 women and men and 41,500 children from these households. The $24 million (Shs 88.8 billion) project is funded by the ministry of Foreign Affairs of the Netherlands.

Joost Van Ettro, the head of cooperation at the Embassy of the Netherlands said the project focuses on the specific supply chains, namely cocoa, coffee, cotton, gold and tea. He said the project is implemented in six other countries including Côte d’Ivoire, Nigeria, Mali, Uganda, Egypt and Malawi.

Amongi said the children who stay in school and out of work have a better chance to fulfil their own potential, in turn helping break intergenerational cycles of poverty and supporting sustainable economic growth.

She said the Employment Act 2006 under Section 32 outlaws the employment of children below the age of twelve years. Those between the age of 12-14 are allowed to work under light work but under the supervision of an adult. No child is to be employed in any hazardous work. The Employment Act is being amended to strengthen the provisions for children especially those engaged in activities regarded as child labour.

“ILO Social Finance Model is a concrete solution to implement priorities of the Uganda National Action Plan for elimination of child labour, reduce poverty and improve livelihoods and mainstream child labour into other policies like National Financial Inclusion Strategy. We are exploring synergies with the financial sector to play an active role in the fight against child labour,” she said.

She said the government is taking a zero-tolerance stance towards child labour through the respect for international labour standards, implementation and enforcement of the national labour laws and policies on the elimination of child labour.

She applauded ILO for bringing the project to Uganda, with a focus on addressing child labour in the tea and coffee supply chains. Coffee and tea are our chief agricultural exports and foreign exchange earnings and we do not want to associate the production of these crops with child labour, forced labour, or any other violations of human rights.

Those who manage to have education & have jobs/ salaries after growing up labouring are poor as they have poor parents, brothers, sisters...to help!

The fight must be for Good Governance to provide Public/Social services & Education for ALL kids comes FIRST, if there is to be a beginning to child protection in shitholes!

Yet, not even UN knows that Good Governance MUST be CONDITIONAL in all member states, to protect children/the young!

Good Governance in USA/UK/EU is the reason migration will NEVER stop, as there is NOTHING done to say NO to bad rule in shitholes!

Until then, migration to developed world is the only solution for the young/parents from shitholes!
Report to administrator