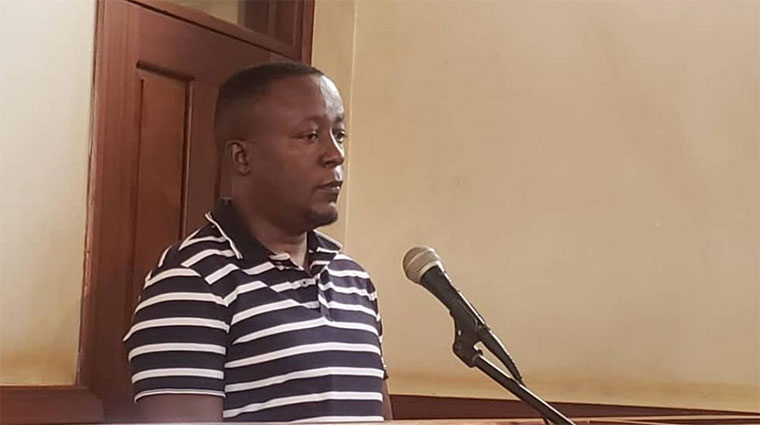 Joseph Kabuleta in the dock

Kabuleta, also president of the National Economic Empowerment Dialogue (NEED) party, was on Wednesday arraigned before chief magistrate, Ritah Neumbe Kidasa and charged with one count of promoting sectarianism, which he denied.

Court heard that Kabuleta and Prossy Ayebare, another member of NEED and others still at large, published statements contained in a video posted on Kabuleta's YouTube with statements that are likely to create alienation and despondency, raise discontent or disaffection and promote feelings of ill will or hostility among the Banyarwanda, Bahima, and Banyankore.

According to the charge sheet signed by the director of public prosecutions (DPP) Jane Frances Abodo, the crimes were allegedly committed on May 30, 2022, in Kampala district, and posted on Kabuleta's YouTube channel.

But Kabuleta denied the charges. State attorney Doreen Elima informed court that investigations into this matter are still ongoing. Kabuleta’s lawyer Remmy Bagenda attempted to apply for bail on the basis that his client has an ongoing regular treatment that he is supposed to access. However, Kidasa advised him to do so in the next court session citing that she had other court matters to attend to.

Neumbe remanded Kabuleta until December 14 and also issued criminal summons to Ayebare. Kabuleta was arrested on Monday from his office in Bugolobi, a Kampala city suburb by plain-clothed security personnel who were travelling in a navy blue Toyota Hiace vehicle popularly known as a drone.

On Tuesday, the police said that Kabuleta allegedly defied summons that required him to appear at the police headquarters to record a statement on the charges.

+5 #1 Webz 2022-12-01 09:39
Standing in the Dock to answer charges is normal. The abhorable part of it is the way citizens are apprehended by cruel ungazzeted means that edges on abduction.

Torture is part and parcel. One gets lucky to escape death as a result of such manhandling.
Report to administrator
-4 #2 Charles Dicken Oruk 2022-12-01 11:29
The opposition politicians in Uganda of yesterday are different from the one of today. The one of today, they abuse the government, speak shit about those in power and knowing very well that what they are saying could land them into prison. They sit and wait for their arrest by the government.

It seems it gives them some happiness that they names are all over news media about the arrest. During the time of Idi Amin, opposition politicians run away the moment they detected something or think they may be arrested.
Report to administrator
-2 #3 Charles Dicken Oruk 2022-12-01 11:29
The one of today think going to prison is a luxury yet the treatment they get from there is worse than the one who take your life at once.

You go to prison, tortured and in most cased poison. You come back from there limping and your life turn into a roller coaster by being in and out of the hospital. In the end the become the late.

In the past, those in opposition run away the moment they detect danger. This gave majority of them to come back and remove the regime of Amin in 1979. Today, they (oppositions) sit and wait for their demise with pleasure.
Report to administrator
-5 #4 Wainanchi 2022-12-01 14:48
Your Honor.
I.am proposing that you put him.behind bars for a long time for spreading hate and peace amongst Ugandans.

Uganda suffered too.much from.charscters like this one and is tired of quasi leaders like this individual generator of hate Kabuleta.

Anyways, do punish him as an example to others who may try to follow his example.
No.mercy Your Honor.Noup!!
Report to administrator
+2 #5 Lakwena 2022-12-02 10:01
But if it were the police that summoned Kabuleta, to appear at the police headquarters and record a statement on the charges; and the same Police also knows the man's office and/or Residence (one of 2021 Presidential Candidates), why on earth should it be the military, CMI operative to abduct him?

In other words, including the wrongdoers themselves; who can still deny that: this is a military government of lawless wrongdoers, by wrongdoers and for wrongdoers only?
Report to administrator