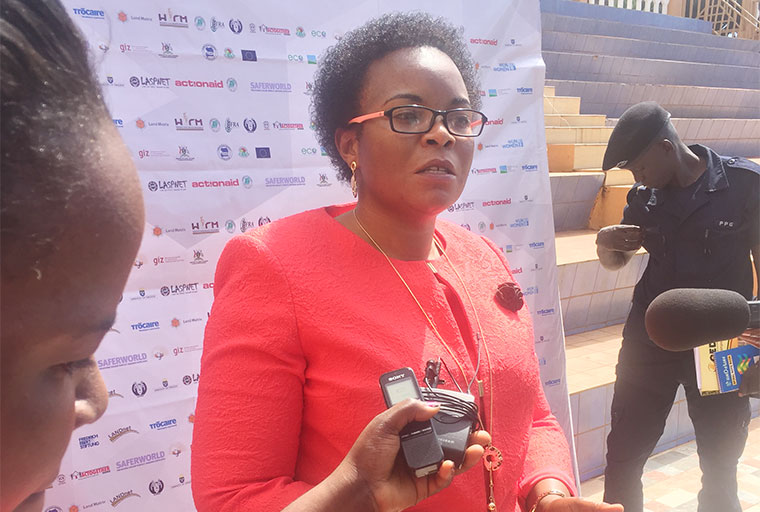 The parliamentary rules, privileges and discipline committee has found the minister of state for Housing, Persis Namuganza guilty of contempt of parliament and gross misbehaviour and recommended her censure.

"The committee finds that the conduct and behaviour of Hon Namuganza constitutes gross misconduct and misbehaviour and is not befitting of a member of parliament, more so a minister. Being cognizant of the fact that parliament approved her appointment as a minister, recommends that the house invokes article 118 (1) (b) of the constitution and rule 106 of parliament rules to censure her," reads the committee report tabled before the house on Wednesday.

Committee vice chairperson, Charles Onen tabled the report following their inquiry into allegations of misconduct levelled against Namuganza, who also doubles as the Bukono County MP by his Bukooli Central counterpart, Solomon Silwany on July 13, 2022. Silwany raised a procedural matter on the floor of parliament, accusing Namuganza of taking to social media and television and criticizing and questioning the powers and integrity of the presiding officers of parliament to form adhoc committees.

This followed a report compiled by the adhoc committee that investigated the giveaway of Nakawa-Naguru land, which recommended that Namuganza steps aside as minister for allegedly falsifying a presidential directive that led to the Uganda Land Commission (ULC) to allocate the land to some investors.

Namuganza reportedly questioned the way investors and other people who appear before parliamentary committees are handled, equating it to a torture chamber. In his submission to the committee, Silwanyi said that the minister had questioned the integrity of parliament through statements on a WhatsApp group of MPs of the 11th parliament.

"Hon Silwany adduced evidence of printouts of the WhatsApp messages allegedly posted by Hon Namuganza using her telephone number, 0782670551. The testimony of Hon Silwany was corroborated by Hon Sarah Opendi, Hon Elijah Okupa and the administrators of the 11th PARLIAMENT-Official WhatsApp group. Mr Chris Obore confirmed that the impugned messages were posted by Hon Namuganza and were still on the WhatsApp group. He adduced evidence of printouts of the messages," reads part of the committee report.

Onen said that they established the authenticity of the messages from the phone and those in printouts tabled by the witnesses.

"The committee further established from the records of parliament that the telephone number, 0782670551 from, which the impugned messages originated, belonged to Hon Namuganza.  In view of the uncontroverted evidence of the WhatsApp messages, the committee finds that Hon Namuganza made the impugned statements on social media as alleged," said Onen.

Onen also told parliament that Bugabula South MP Henry Maurice Kibalya presented further evidence from a Daily Monitor online article of May 22, 2022, with the heading; 'Parliament has no powers to suspend me - Namuganza.'

"He alleged that in the said article, Namuganza was quoted as having stated in an interview with NTV Uganda regarding the report of the adhoc committee on the Naguru-Nakawa that: 'This report was misleading members of parliament, debating things, which they don't know about and finally passing resolutions which they actually don't know. On this basis, first of all, I belong to the executive and I know that they will have to forward the resolutions to the executive for confirmation I'm sure the executive is sober and it will not act the way they acted," said Onen.

Onen also explained that the committee viewed video recordings from the NTV interview and that they are satisfied that Namuganza made the statements attributed to her in the television interview that was later reproduced in the Daily Monitor.

"The words used by Namuganza as defined implied that parliament lacked understanding of what it was doing. That it passed a deceptive, and biased report and that parliament is comprised of unserious and drunk people who are not law-abiding in the discharge of their duties," further reads the committee report.

According to the report, the statements by Namuganza were unfounded, baseless, malicious, demeaning, and contemptuous. Onen told the house that the minister's statement undermined the authority and integrity of parliament and brought the House and its members into disrepute.

"The committee finds that, by making derogatory statements about parliament, the conduct of Hon Namuganza amounted to gross misconduct and misbehaviour, was an affront to the dignity of parliament, it denigrated public trust and confidence in the authority and integrity of the office of the speaker, members, and the institution of parliament. Her conduct was in breach of conduct for members of parliament as enumerated in the rules of procedure and constituted contempt of parliament," said Onen. Thomas Tayebwa, deputy speaker deferred debate on the report to next week.

If adopted, MPs will invoke article 118 of the constitution and rule 106 of parliament rules to censure Namuganza. Article 118 provides for a vote of censure. It provides that parliament may, by resolution supported by more than half of all members, pass a vote of censure against a minister on grounds of abuse of office, misconduct or misbehaviour, physical or mental incapacity, mismanagement, or incompetence.

"Upon a vote of censure being passed against a minister, the president shall, unless the minister resigns his or her office, take appropriate action in the matter," reads part of the constitution.

On the other hand, parliament’s rules of procedure provides for the censure process against ministers and requires any member desirous of moving this motion to notify the clerk in writing of his or her intention, citing the ground for the proposed censure motion and giving detailed particulars supporting such grounds.

“The clerk shall, within three days upon receipt of the notice of censure notify parliament by causing the notice, the ground, and particulars supporting the ground of proposed censure motion to be pinned on the members’ notice board. The clerk shall on the date and time of pinning the notice of censure cause to be prepared and deposited with the sergeant-at-arms, for a period of ten working days, a list of all MPs with an open space against each name for purposes of appending signatures,” the rules read in part.

The rules require that any signature appended to the list shall not be withdrawn and after at least one-third of the MPs have appended their signatures in support of the proposed censure, the sergeant-at-arms shall forward the list to the clerk. Out of the total 529 MPs in the 11th parliament, a successful censure motion would require 176 signatures.

Shame on you Basoga for fighting a fellow musoga over flimsy issues. Big shame on you. But I assure you that she is going nowhere. The appointing authority knows the genesis of this witch hunt.
Report to administrator
0 #3 kabayekka 2022-12-04 21:32
Of course this is a Minister that is speaking the truth of the matter about the business of Parliament of Uganda.

About 400 Members of the Uganda Parliament are singing the praises of the political party of NRM out of a total of 529 of the national peoples representatives in this house. 81 Ministers are everyday seated with the long serving executive President of Uganda seriously discussing NRM public policy . So then how can this mere parliamentary committee just come along and try to censure this hard core NRM Minister? Kumanyiira?
Report to administrator