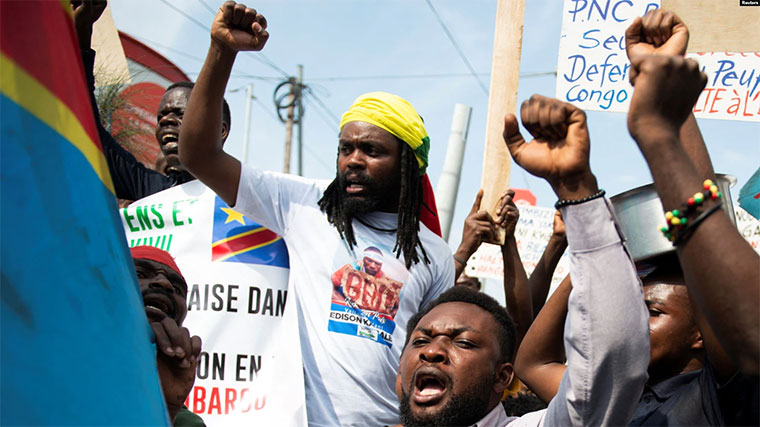 The March 23 Movement (M23) rebels and the Armed Forces of Democratic Republic of Congo (FARDC) troops are trading accusations over the death of 50 civilians in Rutshuru territory, North Kivu province.

On Tuesday, 50 civilians were killed in Kishishe locality, Bamboo Groupement, Bwito chiefdom. The bodies were discovered hours after the fighting between M23 rebels and local armed groups opposing the rebels’ occupation in the area. The fighting happened at a time when talks between the armed groups and the Congolese government are ongoing in Kenya’s capital Nairobi.

On Thursday, Gen Sylvain Ekenge, the FARDC spokesperson released a statement attributing the killing of the civilians to M23 rebels. Ekenge claimed that the 40 were massacred for resisting rebels’ rule. He also says that an unknown number of other civilians were kidnapped by rebels.

“Faced with the population's refusal to submit to their dictate, the Rwandan Defense Forces and their M23 auxiliaries carried out massacres of civilians in the territory of Rutshuru. The latest case is that of 50 Congolese civilians cowardly murdered on Tuesday, November 29, 2022, in Kishisshe a locality located in the Bambu Group, Bwito chiefdom in the territory of Rutshuru. Several other civilians are now missing or kidnapped,” Ekenge said.

He also claims that M23 rebels on Thursday attacked the positions of the FARDC held by the 341st Infantry Regiment in Kalima, near the bridge over the River Rwindi in the Bamboo Group, Chiefdom of Bwito Territory of Rutshuru.

Lawrence Kanyuka, M23 rebels’ political spokesperson also released another statement rubbishing Ekenge’s accusations and described them as baseless and false. Kanyuka in a statement accuses FARDC of collaborating with Democratic Forces for the Liberation of Rwanda (FDRL) rebels and militias of Mai Mai and Nyatura among others and killed the civilians in order to tarnish the image of M23. Kanyuka says that M23 does not at all target civilians.

“The M23 strongly condemns this practice not only executed by the DRC Government and the coalition of FARDC, FDLR, Nyatura, APCLS, and Mai-Mai, but also by some organizations. In all areas that the M23 controls, all the populations live in harmonious collaboration and carry on their business as usual without any worries,” Kanyuka said.

He also accuses FARDC and the militia coalition of platting to carry out a genocide mission in Masisi territory with a mission of gaining sympathy by attributing it to M23. On Thursday fighting between M23 and FARDC occurred in the villages of Kirima, Matete, and Lushebere along the Bambo-Kibirizi road in Rutshuru territory. Fighting has led to the displacement of civilians to Kitshanga in Masisi territory, which is under the control of M23 rebels.

Meanwhile, the Banyamulenge community has suspended participation in the ongoing Nairobi dialogue over the killing of seven of their fellows in Minembwe, in the province of South Kivu. In a press statement issued on Thursday, the Banyamulenge accuse the militia group of Mai Mai in collaboration with militias of Bishambuke, Kakutumba, Illunga, Rusesema, and Red Tabara Burundians of attacking the villages of Gakangara, Muuliza, and Biziba on Wednesday and killing seven innocent civilians.

The ongoing Nairobi process on peace and security in the East of the Democratic Republic of Congo brought together several leaders of the armed groups who are at the root of the insecurity in North Kivu, South Kivu, and the province of Ituri. The main objective is to find a solution to the security problems in this part of the DRC. M23 is still absent in the negotiations.

The United Nations and a US diplomat said they also had information about civilian killings on Tuesday in Kishishe, North Kivu province, but did not give details. Both called for an investigation.

"We are deeply saddened by the massacre of civilians in Kishishe, which could constitute a war crime," Stephanie Miley, charge d'affaires for the US embassy in Kinshasa, said on Twitter.

A spokesperson for UN Secretary-General Antonio Guterres said the United Nations had received reports of human rights abuses committed during clashes between the M23 and local militias in Kishishe, which included a high number of civilian casualties.

Congo and UN experts say neighbouring Rwanda supports the M23, which Rwanda has consistently denied. The two countries took part in talks last week in Angola aimed at finding solutions to the conflict.

One of their agreements was that an East African Community (EAC) regional force would intervene against the M23 if it did not stop fighting and withdraw from its positions.

The EAC started sending troops into eastern Congo earlier this year to help fight various armed groups. A South Sudan army spokesman on Thursday said a battalion of 700 South Sudan troops would be sent to join the regional force.

Earlier on Thursday, thousands of people took to the streets of Goma and Bukavu, the two main cities in Congo's east, to protest the deterioration of the security situation.

LYSOL, and why are FDLR, ADF,NFL and several lesser ones still there? Rwanda makes this point and nobody listens! After what Interahamwe did in Rwanda, men have learnt that it's better to die fighting! And honestly why give FDLR a free reign!

I believe that once FDLR is out of the equation, so will its affiliates and M23, it may not be that simple but its a good start. One thing for sure is that UN mission in Congo has a vested interest to stay for as long as possible. Very many employees are dealing in gold besides a very high pay (over $10,000+ a month!)
Report to administrator
0 #3 Lakwena 2022-12-05 13:24
Quoting Lysol:

Lysol, when they were flashed out of DR Congo in Nov 2013 by the Joint Forces of TZ, the Congolese army and UN forces; the M23 took refuge in Uganda, under protective wings of Gen Tibuhaburwa. where they were, housed, fed, clothed, trained and armed to go back and wreck the current havoc.

In other words, Gen Tibuhaburwa is playing dumb while winking at the M23. Otherwise, unless they are using brooms to fight FARDC who armed and funding the M23 to enable it occupy territory in East DR Congo?
Report to administrator
0 #4 kambarage 2022-12-06 12:40
Quoting Lakwena:

Lysol, when they were flashed out of DR Congo in Nov 2013 by the Joint Forces of TZ, the Congolese army and UN forces; the M23 took refuge in Uganda, under protective wings of Gen Tibuhaburwa. where they were, housed, fed, clothed, trained and armed to go back and wreck the current havoc.

In other words, Gen Tibuhaburwa is playing dumb while winking at the M23. Otherwise, unless they are using brooms to fight FARDC who armed and funding the M23 to enable it occupy territory in East DR Congo?

Report to administrator
0 #5 kambarage 2022-12-06 12:42
Never under estimate a protracted people's struggle. The Banyamulenge are excluded from DRC government systems and that's the concern.

A secession is actually in order. The Banyamulenge who joined FARDC at the last ceasefire agreement under Kabila were decimated upon integration i.e killed or thrown in dungeons and stripped of their ranks. They cannot allow that to happen again and that's why they are fighting...this time round to be in charge of their destiny.
Report to administrator