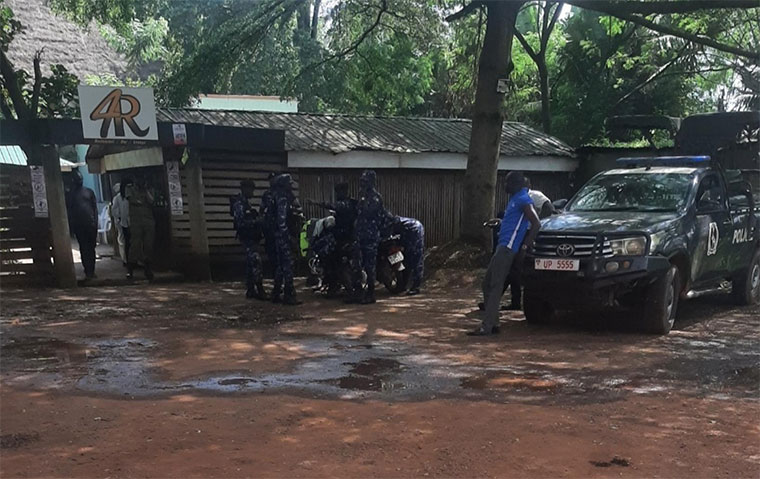 Police on Friday blocked a press conference by human rights organizations that had been called to talk about the current wave of state abductions in the country.

Journalists had gathered at 4R Restaurant at Centenary Park, in Kampala but police arrived a few minutes before the press conference could start and said it had not been cleared. Plain-clothed and uniformed police asked the restaurant manager and organizers to cancel the press conference, claiming that they were unaware of such a gathering.

Police further asked the journalists to leave the area before it takes further action.

“What is this gathering for? Are you journalists? Personally, as an individual, I like you people and I have always interacted with a number of you, but what I don’t want is, this thing according to the intelligence network was not sanctioned by the IGP, so we don’t know why this gathering is here. So with due respect, I make a request to you, to pick up our machines, and then we move away, kindly,” said the police officer whose name tag read Igune.

Ronald Katushabe, one of the organizers, said African Justice Media, Rubaga Social Justice Center, the African Libertarian Union, and the Human Rights Defenders’ Union had joined efforts to voice concerns over the new trend of abductions. He said that they are against the kidnaps of people without trial.

When contacted for a comment, Kampala Metropolitan spokesperson Patrick Onyango said he was not aware of the incident. On Tuesday, deputy speaker of parliament Thomas Tayebwa, sent Mityana Municipality MP Francis Zaake to the parliamentary rules, privileges, and discipline committee for disciplinary action over what he called unparliamentary misconduct.

Zaake refused to sit down when asked by Tayebwa and continued to raise his voice after he rose on a matter of national importance concerning the recent arrests of a Muslim cleric Sheikh Yahaya Ramathan Mwanje and former presidential candidate Joseph Kabuleta and other NUP supporters such as Jamshid Kavuma.

+6 #1 Apollo 2022-12-03 09:56
For the sake of peace and stability, abductions by state operatives should cease and full accountability of these horrible acts goes on record.

Gen. Museveni may falsely believe that he has the military resources but this Country can easily explode into a regrettable insurgency supported by the population. It has happened before and it can happen again.
Report to administrator
0 #2 kabayekka 2022-12-04 00:04
It seems that more inequities of the Uganda police are never going to end. Everyday seems to come with the citizens' fear of a brutal African police.

Instead of the police assisting the public to live a more fulfilling modern life, the public is arrested, tear gassed, and killed at a moment's notice. One thought that the country of Uganda is an independent sovereign African nation?
Report to administrator
+3 #3 Olum S. 2022-12-04 17:42
Quoting Apollo:

For the sake of peace and stability, abductions by state operatives should cease and full accountability of these horrible acts goes on record.

Gen. Museveni may falsely believe that he has the military resources but this Country can easily explode into a regrettable insurgency supported by the population. It has happened before and it can happen again.

You’re better off talking to a rock. This regime is set in its ways and nothing will change them. Ugandans now need to decide what measures to take in order to force them out, all of them.

This will however require concerted action, from all walks of Ugandan society, so they don’t try to terrorise, intimidate and play one group against another.
Report to administrator