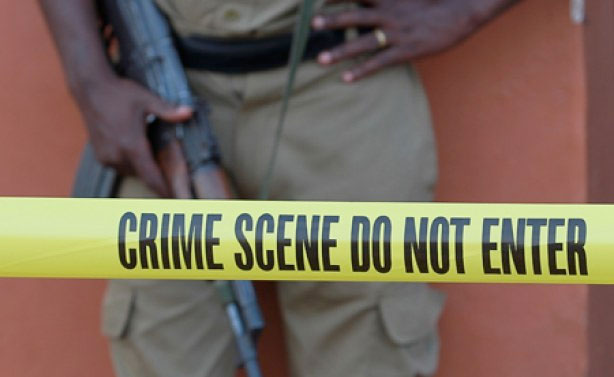 Details have emerged about how Katwe Divisional operations commander, assistant superintendent of police (ASP) Julius Gwaivu, was hit by the suspect he'd already arrested to the extent of exposing part of his brain.

A video showing ASP Gwaivu’s shattered head being attended to by doctors has been making rounds on social media, with many wondering how a police commander could be attacked to that extent yet such officers are usually guarded during operations.

But a report by ASP James Illa Waigo, the Katwe divisional criminal investigators boss details the incident. Waigo's findings which have been shared with the Kampala Metropolitan police commander, SCP Stephen Tanui and police operation director AIGP John Nuwagira show that the injured officer who was accompanied by two of his juniors went to arrest suspect Ronald Watenyeri after booking out the operation on SD 100/17/11.2022.

Watenyeri had been reported by Iddi Mufabi for assaulting him and the case was entered on reference number SD 91/17/11/2022. Gwaivu and his two subordinates donned in police Khaki uniform arrested Watenyeri from Kisekka market, in Kampala CBD and put him in a private vehicle.

But as Gwaivu drove away with the suspect, his car was blocked after about 300 meters by three people who have since been identified as Herbert Wekoye, Moses Wambuku and James Namanda.

“That Wekoye obstructed the way of police officers who were driving in a private vehicle by throwing his motorcycle in the way - forcing them to stop while Wambuku Moses blocked them from behind with a motor vehicle,” Waigo’s report reads in part.

Gwaivu was blocked from taking Watenyeri as his colleague Wekoye forcefully opened the car and aided him to escape. In response, Gwaivu’s subordinates decided to arrest Wekoye for aiding the suspect to escape but he resisted and made an alarm that attracted the mob that immediately started pelting the police officers’ car with stones.

“When ASP Gwaivu got out of their car, the mob stopped throwing stones after knowing that the suspect Ronald was arrested by police. After Watenyeri Ronald escaped, he returned to the scene and assaulted the victim (ASP Gwaivu) with a metal,” Waigo’s report further reads.

Gwaivu’s attack was reported at Katwe police division where a case of assaulting a police officer and obstruction on duty was entered on CRB 1921/2022. At that time, ASP Gwaivu’s colleagues had rushed him to the hospital where he needed urgent medical attention. It is here that the viral video was recorded.

A lot has been said ever since Gwaivu was attacked with some police officers expressing dissatisfaction with Nuwagira summoning a hospitalized colleague to defend himself instead of focusing on arresting his attackers. But Waigo in the report indicates: “On 21.Nov.2022, the director operations AIGP Nuwagira called ASP Gwaivu to his office at police headquarters to listen to his side of the story about the allegations of assault vs the arrest of Watenyeri Ronald.”

So far Wekoye, Wambuku and Namanda James have been arrested. Waigo indicates that a team led by detective constable Joseph Muda, went to Bududa to arrest Watenyeri where he fled to after attacking Gwaivu but did not succeed.

Kisekka market is a renowned chaotic place where security agencies do not just walk in to arrest suspects. Some of the police officers are wondering why ASP Gwaivu had only two junior officers when going to arrest a suspect from such a notorious place moreover after 6 pm.

+1 #1 jose 2022-12-05 10:41
The first suspect should be Iddi Mafabi, Old kampala police station is near kisseka market and actually has the capacity to handle such case like assault btween bagisu folk why did he choose katwe police station .

Thats where true investigation would start from, to get justice for ASP Gwaivu Police work leave this thing of making names
Report to administrator
+1 #2 Rex Okello 2022-12-05 13:19
In civilized societies such a deadly attack on law enforcement officers is thoroughly investigated & prosecuted.

Security should not sit idly by as society descends into anarchy.
Report to administrator