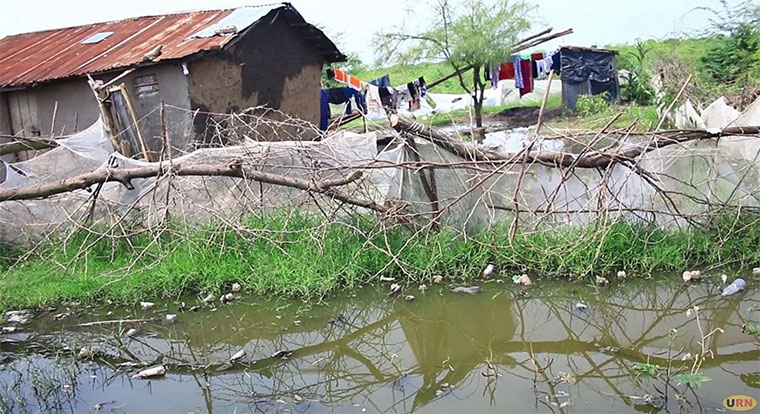 20 households at Kasenyi landing site in Lake Katwe sub-county, Kasese district have been ordered to immediately leave due to the sudden rise of Lake George water levels.

The affected areas are Kasenyi upper, Mwaro, Kasenyi landing site, and Kasenyi fish market. According to L.Katwe sub-county deputy health inspector, Dorreen Apio, all people in dangerous places have been advised to leave immediately to avoid any eventualities that might happen as a result of the flooding. She adds that they expect more water to cross the shoreline because of the current heavy winds on the lake.

"Down here in the village called Mwaro there is a challenge of water and floods because this place is neighbouring a lake. So there are people that are really in a sorrowful state and we have advised them to leave this area. There are those we have advised to leave immediately, however, there are those we have given time, we have given them nuisance notices informing them about the dangers they might encounter," Apio said.

Apio also said that they are trying to stop the likelihood of disease outbreaks in the area due to the flooding. Residents say they have spent close to one week without sleeping in their houses as water levels continued to rise. Alice Asiimwe, a resident of Kasenyi attributes the flooding to the strong winds and water waves that usually occur at the onset and during the dry season.

She however says that whereas they so wish to leave the area, they are constrained by a lack of alternative sources of income since they economically depend on the lake.  Juliet Ithungu, a mother of eight however says that she has nowhere to go with her family, asking the district to help her relocate.

She adds that the community is living in fear and anticipating possible cholera and typhoid outbreak because they occasionally use the lake as their water source for domestic purposes. Majidu Musisi, the area local council general secretary says this kind of flooding last happened five years ago and displaced hundreds of people for weeks before the water dried up.

He is appealing to the area leaders to provide the affected families with tents and relief food to enable them to have a temporary settlement. Natuhwra Ham, the Kasese district LC V vice chairperson says they are yet to receive a detailed report from the sub-county authorities for action.

These lakes collect and distribute to tributaries in western region to central and they pour into lake victoria where they are joined by the kagera from rwanda burundi and slightly tangayika since the western rift valley belt connects.some lakes.
Report to administrator