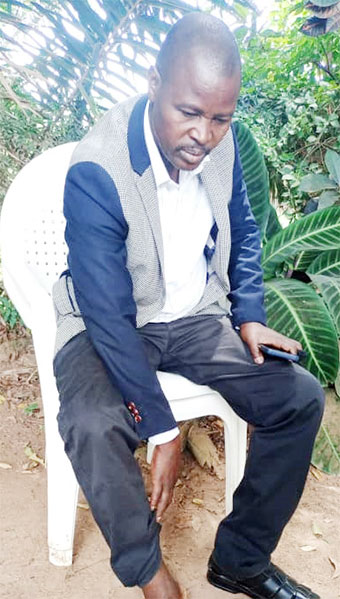 Anacklet Rulihoona says he is improving against cancer of the skin

Nightmares associated with chemotherapies might be coming to an end if research done by the Uganda Natural Chemotherapeutics Research Institute is anything to go by.

Kasim Kasujju was diagnosed with stage 2 lymphoma cancer in 2018 and was told that if he acted quickly enough, the debilitating disease would be defeated because its impact had not spread widely enough.

He was told by doctors at the Uganda Cancer Institute that he would need seven cycles of chemotherapy if he was to stop the progression of the disease. He was devastated by the results of the diagnosis. He knew he was staring death in the face.

Even when they told him that at stage two, cancer can be defeated, it wasn’t reassuring enough. There was more; the impact of the chemotherapy on his external and internal organs. He had read about them, and they were scary. The thought of losing all of one’s body hair, darkening, losing one’s fingernails, and losing one’s appetite was horrifying.

He was young—just 25 years old. He was pursuing a girl, who kept dodging him. He was getting close to convincing her to accept his marriage proposal. What would she think if she saw his beard falling off? Would she accept a man without fingernails? Was she going to accept a man who had previously been brown but was now dark? Who knows?

But Kasujja never wanted to disclose the fact that he had cancer. In many countries, Uganda included, cancer is synonymous with death. Which woman would want to become a widow just a few years after marriage? In the end, Kasujja accepted the doctor’s suggestion of three rounds of chemotherapy. True to word, he experienced each of the symptoms that he had been told about.

First, he lost all his hair, including the beard. Then, the fingernails were plucked out, and when they eventually returned, they were as dark as charcoal, the same skin colour he had adopted. He thinned so much that the only thing you would recognize was his voice.

The now-bald head seemed to have also lost all the meat on it and remained an empty skull. His worst fear also arrived; when the girl learned about his situation, she used it as a pretext to continue playing hard to catch. He never caught her.

“The solution was worse than the problem. You have not known pain until you have been subjected to chemotherapy. I wouldn’t wish anybody to go through what I went through,” Kasujja said in an interview.

He is not alone; there are very few cancer patients who have not had adverse side effects of chemotherapy. According to the International Cancer Council, chemotherapy affects all cells that grow in the body by dividing them quickly. This includes cancer cells and normal cells, such as the new blood cells in the bone marrow or the cells in the mouth, stomach, skin, hair, and reproductive organs.

When chemotherapy damages normal cells, this causes side effects. These side effects can be temporary, such as hair loss, appetite loss, skin colour change, infertility, loss of libido, nausea, vomiting, mouth sores, and memory loss, or they can be permanent, such as damage to the heart, lungs, nerve endings, kidneys, or reproductive organs, among others.

But these nightmares that come with chemotherapies might be coming to an end if research done by the Uganda Natural Chemotherapeutics Research Institute is anything to go by. In a report dated November 30, 2022, and signed by the institute’s director, Dr Grace Nambatya Kyeyune, a herbal medicine codenamed CT2021 has proven effective in stopping chemotherapy side effects.

The sample of CT2021 was provided to the institute on November 11, 2021, by renown herbalist David Ssenfuka and was subjected to animal trials to, among other things, understand its impact on patients undergoing chemotherapy treatment. In an interview, Ssenfuka said they had observed that cancer patients who had been given this drug never had the side effects associated with chemotherapy.

“Even those who had them vanished quickly, and they returned to their normal selves. We observed it for some time, and that’s why we decided to subject the medicine to animal trials to scientifically confirm what we had already observed,” Ssenfuka said.

In their report, the institute observes that CT2021 indeed had contents that dealt with chemotherapy side effects. CT2021, with its nephroprotective and anticancer effects, can be used as preventive medicine against the adverse effects of chemotherapy... In different organ systems, including the liver, several medications used for cancer treatment are known to cause harmful adverse effects.

“For a long time, doxorubicin has been one of the most commonly used chemotherapy agents for the treatment of different cancers. However, the clinical application of this drug is complicated owing to its possible liver toxicity, which may also influence the metabolism and clearance of doxorubicin because the liver is the main organ involved in its detoxification.

“Such liver toxicity may be attributable to oxidative stress, apoptosis, and electron transport chain interference. There is a need for a plan to reduce the adverse effects of anticancer drugs while maintaining their chemotherapeutic effectiveness...

“Histopathological investigations are in good agreement with biochemical changes, and findings of the current study indicated that CT2021 demonstrated significant regenerative and curative activity against doxorubicin-induced hepatic injury,” according to the report.

In addition, the study found that the drug contains cardioprotective, hepatoprotective, and nephroprotective ingredients that protect against alloxan-induced diabetes in animal models. Ssenfuka has gained national prominence for having herbal concoctions that those who have used them have confessed have helped them overcome not only cancer but also diabetes, two of the most feared noncommunicable diseases.

Ssenfuka has tried to have his medicine developed into internationally recognized drugs that treat the two diseases. However, his meager resources do not allow him to develop the medicine. Even when the government, through the ministry of Science, Technology and Innovation, offered to assist, this assistance has yet to materialize.

Indeed, some of those who have used Ssenfuka’s medicine want the government to stop delaying and come to his aid. Samuel James Kiwanuka Sserunyinda, a retired finance controller of Masaka district, says he would have nearly died of prostate cancer if it were not for Ssenfuka’s medicine.

After about ten months, I went back for a checkup, and my prostate had reduced from 1541cm to 224cm... Let me say this: Ssenfuka is a researcher who never advertises himself, but I think the government should support such people...The biggest percentage of the medicine we use comes from trees; so, people like Ssenfuka should be supported so that their medicine can be upgraded to tablets,” Sserunyida said.

“I request the government to assist Ssenfuka in his research, because I think it costs him a lot of money, that is why the medicine is a little expensive, but I believe when the government gives him support, it will be affordable.”

Sseruyinda’s appeal is not different from that of Anacklet Rulihoona, the chairman of Kikuube District Service Commission. Rulihoona has been getting Ssenfuka’s treatment for Kaposi’s sarcoma, cancer of the skin. In an interview, Rulihoona says he has no doubt in his mind that Ssenfuka’s medicine is effective, and he therefore should be supported.

“I thank God for what he has done for me because I can now walk, which has restored hope in my family. My appeal to the government is to support Ssenfuka in his research because he is capable of saving many lives,” Rulihoona said.

Herbal drugs can cause liver damage and kidneys failure. There are also other minor side effects. A patient should always consult with a medical doctor before taking those herbal drugs.
Report to administrator