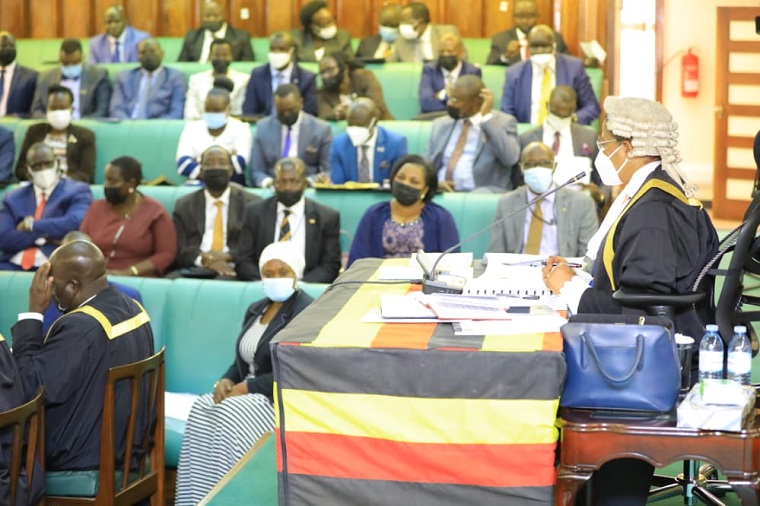 Speaker of parliament Anita Among

In the wake of last week’s Constitutional court decision to nullify Section 25 of the recently-amended Computer Misuse Act, leading legal brains have called for parliament’s tight scrutiny before enacting laws.

The coram led by Deputy chief justice Richard Buteera had justices Kenneth Kakuru, Geoffrey Kiryabwire, Elizabeth Musoke and Monica Mugenyi. It ruled that laws which do not state explicitly and definitely what conduct is punishable are void for vagueness.

Vague laws harm the innocent by failing to warn of the offense, and encourage arbitrary and discriminatory enforcement because they delegate enforcement and statutory interpretation to individual government officials.

“Any vague interpretation will not satisfy the requirement of Article 28 (12) which states that an offence must be defined. That definition, in my view, must be clear enough to enable a citizen to distinguish between the prohibited conduct and the permissible one,” justice Kakuru said.

Court ruled that provisions of the law must be lawful in the sense that they are not arbitrary. They should make adequate safeguards against arbitrary decisions and provide effective controls against abuse by those in authority. In a democratic and free society, prosecuting people for the content of their communication is a violation of what falls within the guarantees of freedom of expression in a democratic society.

The lead counsel for petitioners Eron Kiiza told The Observer “It is a sigh of relief for activists, government critics and human rights defenders who are either charged under or threatened by charges of offensive communication.”

He said it is bad news for the recently enacted Computer Misuse (Amendment) Act, 2022 which is an even more ambiguous, regressive and repressive legislation. The court will employ the same reasoning to annul it.

“It is a win for freedom of expression. And we are saying bye to one of the most dangerous pieces of legislation that the government has used to repress, stifle and ultimately lead to the exiling of Kakwenza [Rukirabashaija] and [Stella] Nyanzi and used to silence others,” he said.

The ruling means the cases of those being tried for offensive communication collapse, police cannot arrest or detain you for offensive communication and anyone convicted on such charge can have the conviction set aside or revised. He urged MPs to stop overreacting and misusing their privileged legislative positions to gag criticism, offensive speech and controversy since such unhindered speech is the foundation of the democracy they swore to protect.

“It is wrong to legislate their disagreement on how we use social media. They should also respect court decisions,” he said.

Joel Roy Mucunguzi, another lawyer, said it is regrettable that the legislature insists on using public resources to pass laws that will require the attorney general to further use public resources in unsuccessful attempts to defend the indefensible.

“Even the amendments introduced to the Computer Misuse Act in 2022 such as those criminalizing “unsolicited information” will fall on the same knife as Section 25 has due to their vagueness and being overly broad, which violates the principle of legality,” he said.

Meanwhile, Bernard Oundo, the president of Uganda Law Society (ULS), said the court reemphasized the primary objective of the Constitution, which is the protection of fundamental rights and freedoms guaranteed under the Constitution.

“It is good that Section 25 of the Computer Misuse Act, which provided that it was an offense for anyone to disturb or attempt to disturb the peace, quiet and privacy of any person with no purpose of legitimate communication, was declared unconstitutional for being vague and it is unconstitutional for restricting the right of freedom of expression,” he said.

“The court ruling should serve as a lesion for MPs that they should not legislate against human rights. Human rights are guaranteed in the Constitution of Uganda,” told The Observer.

Former Makerere University researcher, Dr Stella Nyanzi was arrested in November, 2019 on accusations of insulting President Museveni and his mother through a vulgar Facebook post. She spent eight months on remand and was later convicted of cyber harassment and sentenced to three years in prison but High court quashed the decision and set her free.

In June 2019, Andrew Mukasa, the proprietor of Bajjo Events and Marketing Agency, was arrested and charged with offensive communication and incitement of violence against the person of President Museveni. He was charged and subsequently remanded to Luzira prison.

The prosecution alleged that Kakwenza willfully and repeatedly used his Twitter handle to commit cases of offensive communication against President Museveni and the first son Lt Gen Muhoozi Kainerugaba, with no purpose of legitimate communication.

In March, 2020, the Constitutional court declared Section 8 of the Public Order Management Act 2013 illegal and unconstitutional. The Act gave powers to the inspector general of police (IGP) or any other police officer above the rank of inspector to stop or prevent the holding of a public meeting where the public meeting is held contrary to the Act.

That section was used to crack down on the opposition leaders’ meetings and gatherings. In December, 2022, Constitutional court nullified section 168 (1) (c and d) of the Penal Code Act that provided for offence of Idle and disorderly on grounds that it contravenes the Constitution.

Court said that the elements of section that the accused is a suspected person or reputed thief make it impossible to know what offence he or she would be suspected of.

Muwanga Kivumbi, the petitioner, argued that the section was inconsistent with and contravened the Constitution that provided for the enjoyment of the freedom to assemble and demonstrate.

+1 #1 kabayekka 2023-01-18 07:21
These are hardline NRM who new all the wrongs that were being legislated by this NRM legislature. They chose to swallow the garbage.

Only God knows why now these highly learned Africans are turning coat after many years? One cannot see for the common poor African person why universal human justice is very expensive and only for the educated to manage!
Report to administrator
+2 #2 Lysol 2023-01-18 20:51
So many bad laws. A lot of bad laws are passed just to protect one man, Museveni and his people.
Report to administrator
0 #3 WADADA rogers 2023-01-19 11:15
What did you expect out of a rubber stamp parliament, bootlickers, guys who will do anything to bring a smile on the President's face.

Majority of them dont even appreciate or even understand the laws that they make, they are just busy bodies trying to account for the free monies they earn.