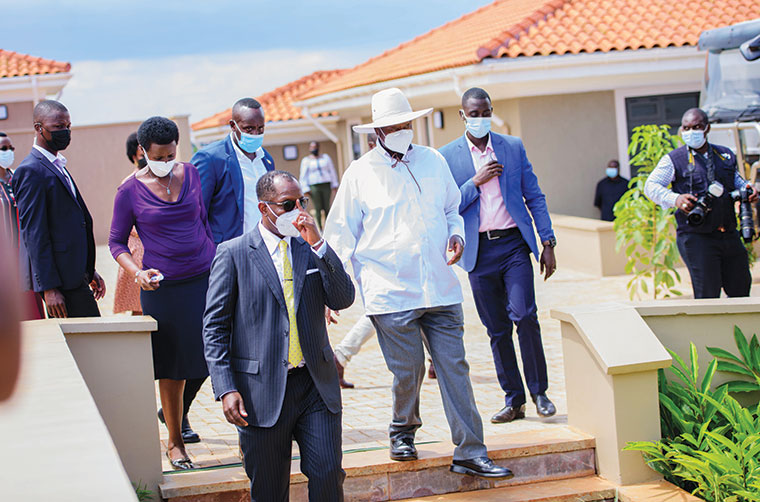 Back in November when Betty Amongi, the minister of Gender, Labour and Social Development, declined to reappoint Richard Byarugaba as the managing director of the National Social Security Fund (NSSF), it was a culmination of years of intrigue among key stakeholders.

Sources within and close to the Fund have intimated to The Observer that whereas power struggles are not new, stakes have been raised in recent years as a result of the fight between the technocrats and political class where NSSF ended up in the Gender ministry instead of that of Finance.

At the centre of the tug of war is the direction of the Fund, with the erstwhile leadership of Byarugaba prioritising liquidity of the Fund while the political class wants pragmatism.

In the midst of this battle, several camps emerged within NSSF and, inevitably, several scandals. The latest of them was a bare-knuckled dossier by Amongi to the NSSF board chair, Dr Peter Kimbowa, in which she defended the decision to defer Byarugaba’s reappointment on grounds of his failings and scandalous undertakings.

It soon emerged that the two had mostly fallen out after Byarugaba refused to sanction Shs 6 billion for the minister’s “planned activities to support NSSF regarding contribution compliance by employers and also enhancing contributions.”

The Observer’s efforts to reach out to Amongi and Byarugaba were futile but some key decision-makers at NSSF have provided dissenting views.

However, there is no denying that the Fund’s direction is hinged on the strategic direction of Gen Caleb ‘Salim Saleh’ Akandwanaho, the de- facto second most powerful figure in Uganda after President Museveni.

Saleh, who is the chief coordinator of shadowy Operation Wealth Creation (OWC), has in recent months directed how NSSF should operate. This is subtly illustrated in Amongi’s 19-page dossier that pins Byarugaba on corruption, insubordination and misrepresentation, among others.

Ordinarily, after Byarugaba clocked the mandatory 60 years, he was not eligible to have his contract extended after its expiry on November 30, 2022 but efforts were already in the pipeline to have the contract extended. But in declining his reappointment, Amongi reasoned that issues raised by Gen Saleh when he hosted the NSSF top brass at Kapeeka on
June 12, 2022 constrained her.

“He has remained good as a technical investment firm manager with a narrow view of the role of the Fund; majorly focusing on the economic and investment role of the Fund. It is this strength that has made stakeholders tolerate him for this long,” she said.

A top-ranking official at the Fund who preferred anonymity told The Observer that Finance minister Matia Kasaija had advised Dr Kimbowa to have Byarugaba’s contract extended. On November 30, 2022, Dr Kimbowa petitioned Amongi, recommending Byarugaba’s reappointment. He premised his justification on the Fund’s 12-year growth to a balance sheet size of Shs 17 trillion ($4.5 billion).

However, a parallel group, which includes disgruntled NSSF officials, had already lined up Byarugaba’s deputy, Patrick Ayota, to take over the helm. According to insiders, Byarugaba and Ayota have had a relatively warm relationship and sided on one side during the acrimonious time in 2016 and 2017 when Geraldine Ssali, the former deputy managing director, took on the Fund on the way it handled her contract.

In fact, insiders claim Ayota has always acted as a submissive number two who was kept out of several key decisions. But when it became clear that Byarugaba and Amongi were reading from a different script on NSSF matters, many ministerial and political decisions started to be channeled through Ayota.

It’s widely understood that Ayota was working closely with Among to undermine Byarugaba. This is because as soon as Byarugaba was forced out, Ayota tabled the contested Shs 6bn budget to the board for approval. The board was adamant. Upon learning about this move, the IGG Beti Kamya quickly moved in and stopped any alterations to the previous passed budget.

“Ayota is this good fellow who knows how to play his cards. He is a friend with everyone and that is how he was able to create a smooth path for the renewal of his contract [in spite of the fact he had also clocked 60 years] because he understood where the power lies,” said a source at the ministry of Finance.

The Observer also understands that Byarugaba’s biggest undoing was to publicly defy the minister because one of the unwritten rules for technocrats is to avoid direct confrontations with certain ministers.

“Amongi is a renowned fighter and doesn’t mind her name being dragged in the mud. She carries a political block in government. So, when put on the same scale with Byarugaba, she weighs far more heavily,” said a commissioner in the Gender ministry who preferred anonymity.

“That is why she toes the line of Gen Saleh in all this because that is where the power lies.”

The irony is that President Museveni is opposed to spending workers’ money on associations and regulators. In November, he stopped payment of workers’ money to Uganda Retirement Benefits Regulatory Authority (URBRA).

“If we cannot pay to URBRA, a government agency, why would we pay the ministry to do NSSF work?,” said an insider. “If NSSF started funding Amongi’s works, would she retain her moral authority as the Fund’s supervisor? If she got Shs 6bn promising to mobilize 15 million savers from the current 1.5 million, how would she be held accountable? Would NSSF subject the line minister to a disciplinary hearing?”

Technically, there is still a thin window for Byarugaba’s return to NSSF if the allegations are proven to be malicious but given the slow pace of investigations, that may take years and by which time NSSF will mostly have a substantial managing director. What is without doubt is that the political class has won the battle to control the country’s biggest economic entity.

It is an African political ruling class that cannot promise high employment and a modern welfare state system for this very poor country!
Report to administrator
+8 #2 Lysol 2023-01-18 07:52
So by marring Obote's son makes her famous. Otherwise she would be just an ordinary politician. Obote would turn in his grave.
Report to administrator
+9 #3 the commenter 2023-01-18 14:11
Saw the chaos brewing and I withdrew all my savings fast. If Byarugaba is out, bad things are going to happen to pple’s savings. Love him or hate him. Byarugaba was good at his job.

It takes focus and real work for the fund paying out double-digit interest. It’s not magic. Now the dogs have entered the hen house. Pull out your savings. If you live outside Ug legally, the law allows you to withdraw.
Report to administrator
+3 #4 Eve 2023-01-18 16:49
I think Byarugaba has done his best. Mafias are pulling him down with them. It's a shame.

One thing I didn't agree with him is the real estate. The very expensive houses he agreed to be built. The 99% savers cannot afford them. Besides most savers have their own properties.

Anyway he has served and will be remembered of his works. Let him leave the reigns before they hurt him.
Report to administrator
0 #5 Remase 2023-01-21 09:29
Fellow countrymen, we are under a hardcore organized criminal govt. NSSF has always been embedded/imbedded in scandals since M7 captured state power and/or its inception!

I think Byarugaba has done his best. Mafias are pulling him down with them. It's a shame.

One thing I didn't agree with him is the real estate. The very expensive houses he agreed to be built. The 99% savers cannot afford them. Besides most savers have their own properties.

Anyway he has served and will be remembered of his works. Let him leave the reigns before they hurt him.

Totally agree. He should not soil his reputation by rubbing shoulders with our well known corrupt politicians. They can really soil him and kill his potential to get international assignments
Report to administrator