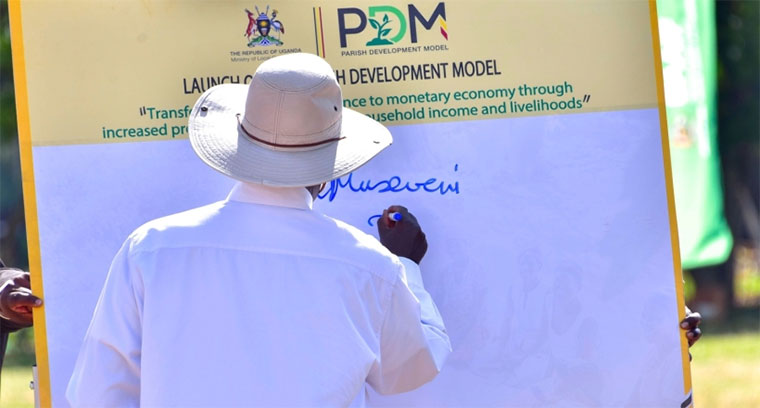 Government is implementing the much-hyped Parish Development Model (PDM) in reverse gear, and thus its intended target of uplifting 39 per cent households from subsistence to the money economy may never be realised, Auditor General has warned.

Auditor General John Muwanga in his audit report covering 2022 highlights more challenges than successes in the implementation of PDM thus far. The challenges include incomplete baseline data, implementing entities not provided with resources to undertake the start-up activities, diversion of Shs 17.5 billion, Shs 594.7m in five Local Governments not supported with requisite documentation among others.

The report indicates that the revised budget for the model during the financial year was Shs 234 billion out of which, Shs 139 billion was released - representing 59.4 per cent performance.

Muwanga notes: “I reviewed government’s preparedness to implement this intervention and noted the following; successful implementation of the PDM requires complete and reliable baseline data. The data collection exercise was supposed to be undertaken by Uganda Bureau of Statistics, ministry of Information, Communication and Technology and the Local Governments between 6th June 2022 and 31st July 2022. By the time of writing this report in December 2022, only 41 per cent of the expected data had been collected.”

According to the auditor general, the data should have informed the selection of beneficiaries and would be used for future performance reviews and impact assessments.

“Five implementing entities including ministries of Agriculture, Health, Water, Education and Works were not provided with resources for undertaking start-up activities. The money was meant for activities like selection of enterprises for each parish, formation of parish-based commodity clusters, identification and prioritization of social services at sub-county and district level, and developing a strategy for upgrading local markets,” the report indicates.

“As a result, these activities were only partially done using resources provided within the approved budgets of these entities which were inadequate. This affected preparedness to fully roll out the PDM intervention.”

The report further points out the fact that the money was meant to fund administrative activities, recruit parish chiefs, purchase gadgets and tools and fund SACCOs without accompanying with guidance on funds utilization. But, guidelines or directives were later issued towards the end of the financial year, after funds had been released and the guidance was at times contradictory.

Shs 17.5 billion was diverted from the purchase of gadgets and tools, staff costs and administrative costs to revolving funds in 146 Local Governments without authorization, contrary to Regulation 16(1) of the Public Finance Management Regulations (PFMR) 2016.

In addition, the funds disbursed to Saccos varied from one district Local Government to another with Saccos receiving amounts ranging from Shs 2.3 million to Shs 17.8 million and 1,502 Saccos in 70 Local Governments did not receive any funding.

“The funding variations were attributed to lack of accurate data on the number of parishes and shortfalls in releases. Shs 29.5 billion meant for revolving funds in 49 Local Governments was transferred to 3,214 Saccos that were neither registered under the Cooperative Societies Act nor had signed Parish Revolving Fund (PRF) Financing Agreements,” the report indicates.

Shs 79.2 billion was disbursed by the ministry of Finance to the district accounts instead of the beneficiary Saccos accounts, contrary to guideline 3.6.1 (c) of the PDM issued in May 2022 and consequently, five district Local Governments diverted Shs 358 million from the revolving fund to administrative activities.

More Shs 79.2 billion was paid to 8,703 Saccos as revolving funds in 169 Local Governments but, remained idle on Sacco bank accounts and non-utilization according to the auditor general delays the achievement of PDM objective of improving community livelihoods. The report also indicates irregularities in the recruitment of parish chiefs.

“For instance, in Butaleja District Local Government, 15 out of the 39 parish chiefs recruited had forged academic documents, resulting in loss of government funds worth Shs 12 million. PDM funds amounting to Shs 594.7 million in five Local Governments relating to administrative costs, staff costs and gadgets and tools were not adequately supported with the requisite documentation.”

The report recommends that the ministry of Local Government and the ministry of Finance ensure all disbursed PDM funds are fully accounted for and that accounting officers revoke appointment letters of the irregularly appointed parish chiefs and recover the paid funds.

+7 #1 PaulM 2023-01-20 09:35
The parish development model was never designed to uplift Ugandans out of poverty but to keep them as beggars dependent on handouts.

It is like treating malaria with Panadol instead of Fansidar. It should be renamed the Poverty Distribution Model.
Report to administrator
+3 #2 kabayekka 2023-01-20 11:04
This African Political party enjoying to enact these sorts of international welfare programmes and then failing is an abomination to African social humanity.

It cannot accept that the corrupt should be punished. Most probably because if fingers have got to be cut off of the corrupt administrators, the largest number of the corrupt will be NRM dodgy officials!
Report to administrator
+1 #3 kabayekka 2023-01-20 19:52
It wants to look like if the poltical opposition administrators were the ones eating the tax payers money left, right and centre, the civil prisons and the military prisons of Uganda would be full up by now!
Report to administrator
+1 #4 Webz 2023-01-21 16:26
It all adds up to experimenting the fantasy dream. The best poverty remedy is only the government to create sure deal markets for what citizens already produce on the farm:coffee, cotton, cassava, bogoya, beans, milk, pigs, name them.

They're too numerous but cannot access the market. Why doesn't the government help the citizens to explore the market?
Report to administrator