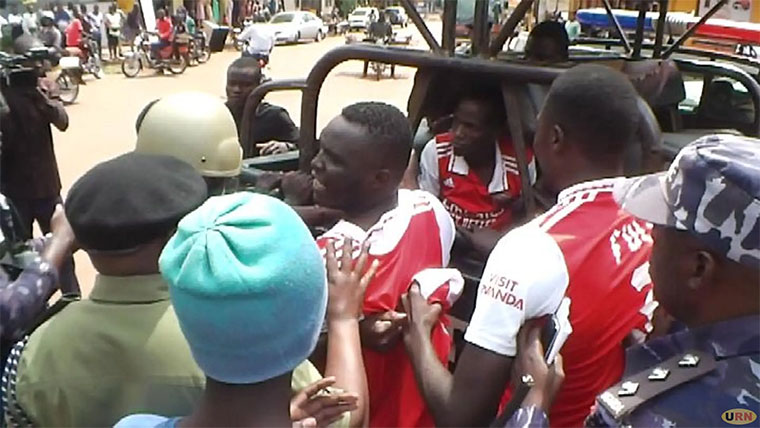 Police has dispatched a team of detectives to establish the 'real' motive behind purported English Premier League side, Arsenal fans who were on Monday arrested over staging an illegal procession in Jinja city.

Kiira regional police spokesperson, James Mubi told journalists that the group of eight suspects was led by Felix Bagiire alias Shamlove, who is also a music show host at Baba FM radio. Prior to their arrest, Bagiire said that Arsenal's win against Manchester United on Sunday was key in strengthening their championship lead at 50 points.

Bagiire also noted that, since Arsenal last won the English Premier League trophy 19 years ago during the 2003/2004 season, the second-leg win against Manchester United was reason enough for the fans to celebrate their increasing chances of lifting the trophy.

Another suspect who spoke on condition of anonymity says that they made a bet with Manchester fans, which would culminate into a celebratory procession if Arsenal won Sunday's game.

“It is true, we are happy that Arsenal is performing really well, but, today’s procession was a clear message to Manchester fans and we hired two vehicles, wore brand new Arsenal jerseys, before flocking Jinja city streets with triumphal celebrations but only to be met with police resistance,” he says.

Mubi however argues that Arsenal has been winning games all season and police became suspicious of why the suspects chose to celebrate so wildly. Mubi also says that in the course of police interrogation, the rest of the suspects lacked basic information about Arsenal and the English premier league in general, save for Bagiire, raising suspicion over the possibility of sinister motives.

Mubi adds that the suspects are being charged with organizing an illegal assembly and they have been detained at Jinja central police station, awaiting prosecution.

"Personally I support Arsenal, so the issue is not Arsenal fans, the issue is we have to find out because when we were interrogating these people, they did not have an answer apart from one person. They don't know who is the head coach, they do know when the team began, they do not know about the unbeaten record, they even do not know how matches we have played so far, how many have we won. So we're saying if you want to have a procession, you have to have to inform us because it is intended for your own safety. For you, you may ignore the security element but a wrong person can take advantage of the situation and at the end of the day, you will get injuries," said Mubi.

imagine putting so much energy. the fans not knowing the couch and players is very irrelevant one could support a team if loves he doesnt have to cram the players. i am a fan of chelsea but i dont even know any player you foolish police man
Report to administrator
+3 #2 Kabinda 2023-01-24 15:26
This is paranoia on steroids! A couple of unarmed young men must be punished for celebrating? How much more stupid can these yellow clowns be?
Report to administrator
0 #3 Talemwa Alitubeera 2023-01-25 18:13
The fact is: they were celebrating an Arsenal win. However ,the paranoid police of Jinja thinks they were NUP guys trying to overthrow the government by demonstration, as it was in the Arab Spring.

It is a pity People are not allowed to show happiness in their own country, over a game win.
Report to administrator