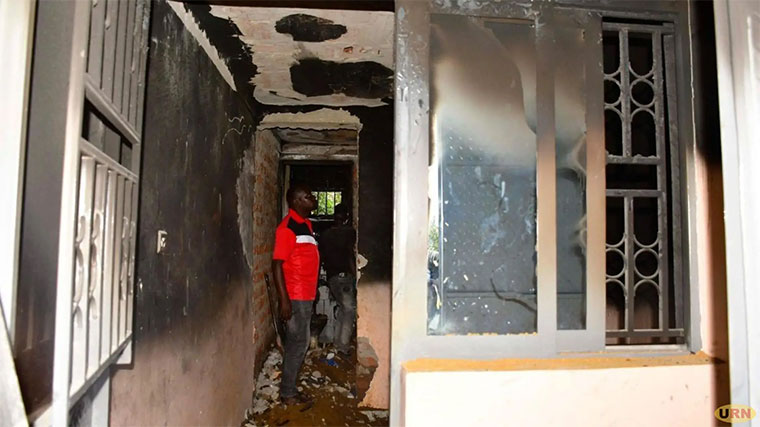 Fresh details have emerged about a man and woman who were burnt to death in Kawempe in an apparent love triangle involving family members.

The incident happened in Katale zone, Kawempe division in Kampala barely a fortnight ago. Detectives had earlier been able to only identify the female victim, Patricia Arinda. But with the help of Closed Circuit Television (CCTV) cameras, investigators have traced the boda boda rider who identified the male victim as Ivan Lukonge whom he picked from Bweyogerere, Kira Municipality in Wakiso district.

Kampala metropolitan deputy police spokesperson Luke Owoyesigyire said Lukonge according to the boda boda rider, was dropped at the home of now prime suspect, Susan Kaitesi at around 3 pm on January 12. Kaitesi had earlier lied to police that she knew the male victim by only one name, Kajumba and that he was hailing from Rakai district.

But the boda boda rider’s revelation has helped detectives to trace Lukonge’s family, and so far, his father identified as Steven Kamoga, has been contacted. Kamoga at the weekend told police that he has also been searching for his son. Owoyesigyire said samples have already been drawn from Lukonge’s body and his alleged father Kamoga for analysis.

If the DNA results march, police said the body will be handed over to Kamoga just like they have done for Arinda’s body which was handed over to her mother Constance Ntegyereize. The identification of Lukonge is not the only suspicious part in Kaitesi’s statement about how the two were burnt to death inside her bedroom. CCTV cameras have shown that Arinda was also dropped at Kaitesi’s home at 12 midday by a boda boda and they got burnt at 5 pm.

“She said the two victims came in together but the boda boda riders who dropped them have said they reported to the residence at different intervals, besides, our findings show that the fire was only limited to the bedroom,” Owoyesigyire said.

Police have interviewed seven witnesses including the two boda boda riders who dropped off the victims. Preliminary findings indicate that Kaitesi was Lukonge's lover. However, she was allegedly alerted by a neighbour that her cousin Arinda was also in love with Lukonge.

“The neighbours told her that whenever she was away, the man would meet Arinda inside the same apartment and they spend nights together. Kaitesi being a person who was always away for work, she had given her cousin Arinda keys to the apartment,” a detective quoting witness accounts said.

She later moved out screaming for help claiming that a gas cooker that had exploded. However, detectives found the gas cooker totally intact in the store. Detectives have now picked a jerry can which was allegedly used to carry petrol that was sprinkled in the bedroom in which Arinda and Lukonge got murdered.