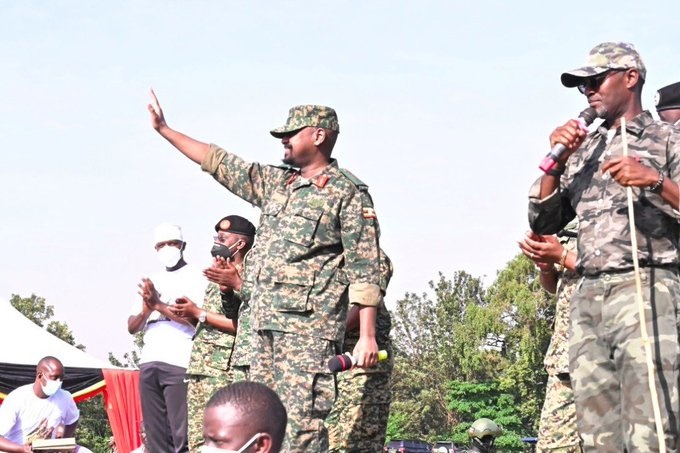 Lt Gen Muhoozi Kainerugaba has celebrated his 48th birthday for two weeks now with a mini-marathon, football match, concerts, and dinners across the country. The party mood is still on but a lawyer, Gawaya Tegulle has jolted the Muhoozi legion of supporters with a court petition challenging the constitutionality of the active-duty general’s activities.

Article 208 (2) of the Constitution provides that UPDF shall be non-partisan, national in character, patriotic, professional, disciplined, productive, and subordinate to civilian authority as established under the constitution. In his prayers to court, Tegulle requested that Muhoozi be arrested for treason and that the court orders Muhoozi to cease carrying out his political activities while still a serving army officer and that an injunction is issued to that effect.

He requests the court to order the Attorney General and Chief of Defence Forces to discharge their constitutional mandate without fear or favor and with effectiveness and efficiency to the last drop. The preamble of Uganda’s 1995 Constitution recalls Uganda’s history, which has been characterized by political and constitutional instability, which in most cases has been orchestrated by men in army uniform.

Muhoozi’s aspirations and actions while still a serving military officer, are a manifestation of a creeping militarization of the state and all other arms of government. The doctrine of civil-military separation of power is a core principle enshrined within our 1995 Constitution with an entire chapter dedicated to the UPDF. Instead of what we see today, the civilian authority should always dominate the gun instead of the gun dominating the authority.

Although Muhoozi’s actions might go without punishment owing to his position as the first son, he sets a bad precedent for Uganda’s future leadership. He has pushed the civil-military divide to a breaking point.

In the future, high-ranking serving military officers may be tempted to make sweeping political statements/form factions within the army confident that a precedent has been set before and will walk scot-free. That cannot portend well for the country. General Muhoozi should lead by example. Let him retire and seek the highest office without using the army as a vehicle. He is a Ugandan who can seek any political office he wants.

O Read your own front page story! It revolves around the army, Gen. Muhoozi in particular, and how M7 has militarized and made Uganda a family, relatives and tribesmen owned country!

Mengo, Katikilo Mayiga in particular, as a cultural leader, has stood in the Bulange Lukiko and made political statements, one after another, however, the Observer has never come out and say, "Mayiga leave Buganda Kingdom out of politics." And further demand for his resignation.

However, you are coming out at a late stage, when the army is alover the nation and particularly imbedded in Mengo and the entire nation! Do you really believe that your outcry will attract any attention to M7, his family, relatives and tribesmen?

Let's concentrate our efforts to cut the strings/roots, Mayiga and useful opposition idiots, which are supporting M7. Urge the nation to stay away from bogus elections.
Quote | Report to administrator
+2 #2 Lakwena 2022-05-12 08:46
But Observer Editors, it is like the absurdity of flogging a dead donkey/horse.

Who can still deny that the NRM leadership came to power through wrongdoings (violence)?

In other words, it is a government of wrongdoers, by wrongdoers and for wrongdoers; which is why the wrongdoers cannot leave the military that is their instrument of wrongdoing (crime against Ugandans) out of politics.
Quote | Report to administrator
+1 #3 Symbiotic 2022-05-14 00:21
The army and government have a symbiotic relationship; for the movie fans/lovers, it's just like that kind portrayed by EDDIE and his symbiote extraterrestrial alien counterpart, VENOM.
Quote | Report to administrator
Refresh comments list
RSS feed for comments to this post
Add comment