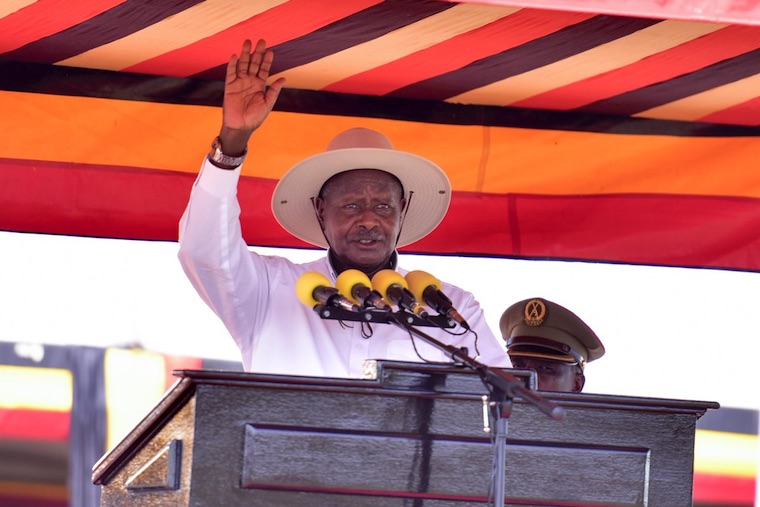 Growing up in the 1980s and 1990s, the default setting of the lone TV station, UTV (now UBC) was a youthful President Museveni in cream Kaunda suits armed with a pen or chalk teaching us economics.

A stern yet smiling teacher, Museveni held court.  The entire family with rapt attention watched Museveni draw lines, arrows, and curves to demonstrate the heart of his teachings - Gross Domestic Product (GDP) and Gross National Product (GNP). Museveni could do no wrong; he was the fire, we, the willing firewood. Armed with GNP and GDP curves, we were on the rise. And rise we did until we did not.

The Museveni delivering the June 7 State of the Nation Address (SONA) is a much older, wizened and unapologetic Museveni. Much has changed since the heady days of the 80s and 90s. Museveni’s speeches are no longer prime family time nor is UBC the sole provider of TV programs.

As Museveni speaks, he sounds exasperated like the frustrated parent of young children who has to call his/her distracted children multiple times to get their attention, and usually by shouting. He has to constantly remind us how resource-rich Uganda is, yet we still import most of what we consume, as we build malls and petrol stations for our farcical modernization.

Removing himself, Museveni sounds like an opposition leader or a leader who has only been in power for one very long term yet too short to deliver. We are bewildered as he theorizes about Ugandan products as the panacea to depletion in global markets. Still the man with the plan, he intimates, Uganda is the phantom superpower working quietly behind the scenes to end the Russian-Ukrainian war.

Fascinated by his self-belief, I recall my fresh-from-university days when the folly and bravado of youth massaged my vanity that we were the generation the country had been waiting for. Our teachers right from primary school had feted us as the chosen ones; our economy would go swiii once we hit adulthood.

My youthful energy had me skydiving, paying premium pounds to willingly jump out of a plane in perfect working condition in midair. My father wondered why money ailed me so that I sought to jump out of planes.

The irrationality of my youth saw me slave away at a private company, where we beheld our work as the gateway to world domination. As the global superpowers have illustrated: why have world peace when you can have world domination?

My boss, a gifted salesperson and visionary, enthralled us with his wonderful interpersonal skills. Sitting down to a chat with the boss was to glimpse a glorious future where we employees would conquer and colonize the earth. We were young; his words stoked our desire to subjugate the earth.

Yet the realism in our pockets yawned hungrily while we slaved away for our big-on-ideas boss. His revolutionary words failed to pad our wallets. Was my boss wrong? No, he was a bad manager.

As a country, our straight and narrow road is our constitution, which once had term and age limits for the presidency. These limits provided the opportunity for strategic and meticulous planning. Visionaries, wonderful as they are, are prone to hubris - they need ‘containment.’ Without term limits to manage Museveni’s shapeshifting vision, we float rudderless, facing each day as it comes on our own.

As he gets older, a robust Museveni, content in his ‘made in Uganda’ billowing curtain of a shirt, is more entrenched in his glory days - the golden era that commenced the sun-kissed year of 1986 where good Uganda starts. One wonders what afflicts him in the twilight of his years. His legacy perhaps?

The days where, armed with a blackboard, he held the nation’s attention are long gone. Now, as he speaks, he holds burning embers to our frustration. With every address, he leaves us discombobulated with more questions than answers.

The African Theater Magazine in June 2019 reviewed playwright Alex Mukulu’s theatrical production, 30 Years of Bananas.’ It highlighted how Mukulu explored the role of citizens in the turmoil of Uganda’s blood-soaked years, with the question, “What did you do for the 30 years?”

Museveni in his June 7 SONA asked that question in multiple ways. He sought to understand why, since 1986, we who were so full of promise, we who the nation had waited for that our economy might take off, why are we still down here, not up there where we know we should be?

Museveni asked, ‘Since 1986, what have you been doing?’ As that question filtered through the disappointment of the SONA, only gratitude remains. I thank Museveni for being the president that has cemented why we need term limits reinstated.

+8 #1 Kalibbala 2022-06-21 23:41
My tayad Muzzukulu..Webale Kubeerawo! You see Mzee Obote R.I.P said This Alien Speaks the Truth by Mistake!! presently He is Under Stress to announce the Demise of His half Brother Who baptized himself "DEATH" During the Murderous 5 Year War in Luweero where 1.000.000 Ugandans lost their Lives!!..The two claim Uganda to be their Entity and Have for the last 36 Years hoarded all our Revenue and Cash meant to Develop the Country under their Beds!

No Wonder the Economy can not take off swiiii!!
It will Your Collective Efforts to Revamp our Motherland!! not All is Lost!!..
Quote | Report to administrator
+2 #2 Remase 2022-06-22 13:44
Tayaad Muzulu, Bobi Wine sang a song, "Buli omu asiba kiwanyi." M7 is the master of deception (Kiwanyi).

Not only has M7 lifted the term and age limits from the constitution so that he can overstay and rule for life, it's almost 4 decades now, but we have not realized the fundamental change.

As BW sings, everyone is selling kiwanyu. Katikiro Mayiga not only urged to accept bogus/rigged and kiwanyi elections, he also ardently told us that M7 is the best president we have ever had. And the least expected person to sell kiwanyi is BW! So, since 1986 everyone is selling kiwanyi! That's why we are down here, not up there where we know we should be.
Quote | Report to administrator
+1 #3 Wooden K 2022-06-22 19:53
Oh God , this lady can really write.
The whole artcle reads like a hit song . Its a real swiii

You have characterized Gen Tibuhaburwa as the Conman sic conjurer or Witch doctor, who mesmerizes his victims with what they want to hear.

By e.g., throwing his dirty pair of "Lugabire" in the air; and when one fell facing down in the North direction (swines), and the other fell facing East in the direction of the victims' neighbor, therein he will declare where the problem is coming from.

In other words, all Gen Tibuhaburwa's declarations and/or pronouncement (SONA) about the predicaments of this country is the Art of a Witch doctor.

Otherwise, you are one of the reasons I religiously subscribe to the Observer.

And being a learning Traditionalist (smell of Books and papers), while in a hurry for work and avoid the inconvenience of "No Change";' once a month I pay for my 4 hard copies to the Vendor in Kabalagala in "Advance".
Quote | Report to administrator
+2 #5 PaulM 2022-06-23 09:48
Wow. This "tayad muzuukulu" is a gifted writer. The voacbulary is the clean version of Kakwenza
Quote | Report to administrator
0 #6 Akot 2022-06-23 18:17
Kalibbala, agreed, but,

Why is Museveni still in power & tribally divided ruled Ugandans are waiting to legalise him with next fake elections, knowing he's the only winner, in the Uganda that belongs to him?
Quote | Report to administrator
0 #7 Akot 2022-06-23 18:37
Remase, thanks.

The divisive tribalistic system ensures migrant M7's post, while ensuring no Ugandan from a tribal land ever takes the top post!

There can't be opposition against M7 & he will rule for life!

Ugandans still need/want M7 & the only way to ensure he rules without outside interference is by maintaining the tribalistic system & fake elections, while hoping he'll give them a better tomorrow!