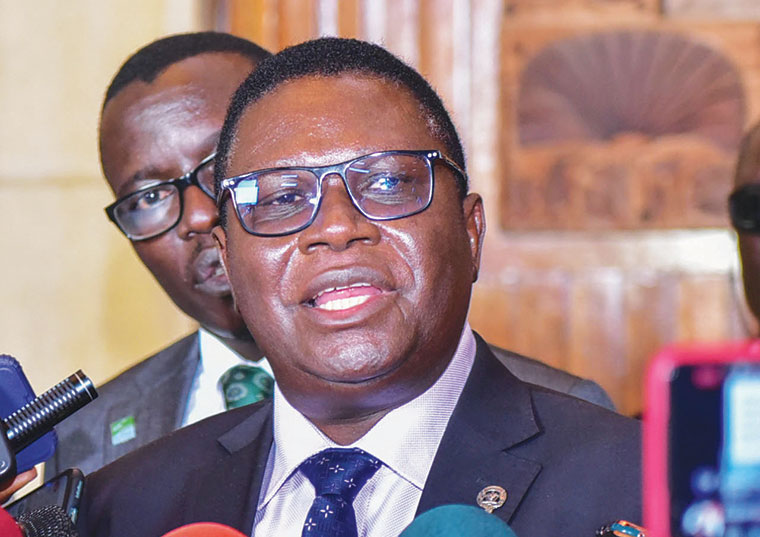 Allow me skip the niceties over your recent appointment to the ministerial docket of Justice and Constitutional Affairs, and the usual protocol observed to get to the point: what really were you thinking when you agreed to work with President Yoweri Museveni?

How would you allow what looks like a demotion by being a mere minister in his government?

What was the rationale for your being chosen a minister by someone who you made us believe was your sworn enemy?

How will your party and country benefit from this personal investment? After your demotion - sorry appointment – a little bird told me that that was a political bribe that you seem to have swallowed hook and sinker for your peril, and that of your outfit.

Do you really trust Museveni? Flip it a wee bit to feel its granularity and its rawness. Do you think Museveni trusts you? It’s your choice to trust anybody but not the master hanger of carrots and a gun teeter in the first place. Note that such shotgun marriages scarcely work. And if they do, it is just temporarily.

Have you listened to the members of your party and others who sympathise with the opposition? After solemnising your shotgun marriage, you are quoted as saying, “I have heard voices calling on me to step aside. The reason would have been for instance if members said I will be too busy. That one I would listen.” Did you truly hear and listen? If you did, did you get it?

In another quote, you said: “My aim is to have a better future for our children.”

Whose children do you mean here? What lessons are you offering to the children? Let me refreshen your memory on this aspect of ‘our children.’ Museveni once said that he isn’t anybody’s servant but a freedom pugilist fighting for his belly and his children and grandchildren.

Mao, what have you to say on the allegations that you are but a mole in the opposition? Are you? Aren’t you? You once said that Museveni’s government is corrupt, incompetent and greedy.

Remember when you were addressing what you called the Seven Sisters, namely BP, Chevron, Exxon, Gulf Oil, Mobil, and Shell, Texaco, and then you accused Museveni’s brother of being behind exploiting and privately using Uganda’s oil. I can agree with you that the government is corrupt, inept and greedy. Well, well, when did it stop being so?

Let me remind you of some of your missiles at Museveni’s regime. You once called it a gun rule, which now you have blindly and sheepishly offered to serve. What went wrong?

There are some people who predicted that you were working closely with the regime. For example, Stephen K Muwambi (May 11, 2022) wrote that “Muhoozi’s team is thinking about Mao... shouldn’t surprise anyone abreast of the political goings.”

Thereafter, Museveni is quoted saying, “I met with Democratic Party President Norbert Mao at State House Entebbe. We signed a cooperation agreement between the NRM and the DP. I salute the DP leadership for this gesture of mature, foresighted and constructive politics.”

Now, it has come to pass. Voila, you are in bed with the man! Bambi ba dia if I can borrow from my colleague Olivia Nalubwama. It is like katandika butandisi!

Let me warn you that those who don’t learn from history tend to repeat mistakes. Before you hail your newly found love and honeymoon, please remember about those who fought in the bush with Museveni. If war- hardened fellas fell and some were felled, who are you to become an exception to the general rule?

Mhango is a lifetime member of the Writers’ Alliance of Newfoundland and Labrador (WANL), an expert in terrorism and author of over 20 books.

A REMINDER:
Before Tibuhaburwa told off Ugandans on 26th January 2017, that he is neither their servant nor employee; I also want ask, where was Mao and other flippers when Gen also angrily told off Ugandans that HE HAS NO FRIENDS?

This was because, in 2005, apparently some Ugandans were surprised and nagging him for having dropped his "supposedly childhood" friend, Hon Eriya Kategaya (RIP) from his cabinet (First Prime Minister).
Report to administrator
+1 #2 Lakwena 2022-08-04 08:06
Intoxicated with power and self-importance, above the future of the country; Foxy Tibuhuaburwa dropped Hon Kategaya and the Hon Miria Matembe of this country because they vehemently opposed the Kyankwanzi Scheme to Delete the "Presidential Term Limit" from the 1995 Constitution.

In other words, Kategaya and others were mistaken and dead wrong, because they took for granted that Gen Tibuhaburwa was after all a childhood friend, therefore; could listen to his "childhood friend's" counsel, not to tamper with the Brand New Constitution and remove the Presidential Term Limit.

Otherwise, Mao is a brand new Ndiwulira, digging deeper into the juicy part of corn. No one can stop him from doing so until he is properly cooked, no big dill.

In other words, very few people can say, it is better to be a hungry Socrates than a satisfied pig (John Stuart Mills).
Report to administrator
-1 #3 Lakeri 2022-08-05 18:26
Lakwena, I know you don't com from Lakwena land but hate him or nor he has given you freedom to say what you are saying now.

When yo go to school and learn the pick people ideology you don't value your own- hate him cry - we will continue voting for him.
Report to administrator
0 #4 Mumira_Njaba 2022-08-08 13:39
Quoting Lakeri:

Lakwena, I know you don't com from Lakwena land but hate him or nor he has given you freedom to say what you are saying now.

When yo go to school and learn the pick people ideology you don't value your own- hate him cry - we will continue voting for him.

But the freedom to speak is a human right globally.Are countries where free speech isnt allowed?If not then thats not a quality to praise.
Report to administrator
0 #5 Lakwena 2022-08-09 07:53
Quoting Lakeri:

Lakwena, I know you don't com from Lakwena land but hate him or nor he has given you freedom to say what you are saying now.

When yo go to school and learn the pick people ideology you don't value your own- hate him cry - we will continue voting for him.

In other words Lakeri, you are one of Gen Tibuhaburwa bloody criminal accomplices of crime against Ugandans/humanity.

Otherwise e.g.,, if it were not because of Gen Tibuhaburwa's subversion and unjust war in Luweero and Greater Northern Uganda, where were you when on average 1,000 children were dying per week, for 20 years (1986-2005)?

Add up that number and you have 940,000, close to a million dead children/Ugandans on the door steps of Gen Tibuhaburwa. What about the hundreds of elders and sick adults, who prematurely died from communicable diseases in the Hellish IDP Camps?
Report to administrator
0 #6 Lakwena 2022-08-09 08:17
Lakeri, can you go and ask Gen Tinyefunza sic Sejusa, when he was the Commander of the 4th Division (Gulu); what happened during his Scotch Earth Operation; when there was a total Media Black Out?

Lakeri, after a negotiated ceasefire between the Acholi Religious and Traditional Leaders and the NRA; can you ask Gen Sejusa what happened to the 205 UNLA soldiers who surrendered and disarmed at Pece Stadium and shipped off in the dark, to Mubarara Govt Prison and have never been heard of again?

In other words, in 2016, now in "Exiled" (Sweden) Col Samson Mande categorically asked Gen Sejusa to tell Ugandans/the people of Acholi the whereabout of these UNLA soldiers.
Report to administrator
0 #7 Lakwena 2022-08-09 08:22
Lakeri, this is because these were Ugandans, parents, husbands, sons and/or relatives of our people, whose whereabout will probably never be known (Victims of War Crime and Genocide) buried in mass graves somewhere, Butt-head.

Lakeri, if one of these soldiers were your brother, father, uncle, in-law a husband to your sister, etc. what would stop you from hating Self-confessed Author and Master of Violence (torture), Gen Tibuhaburwa?
Report to administrator