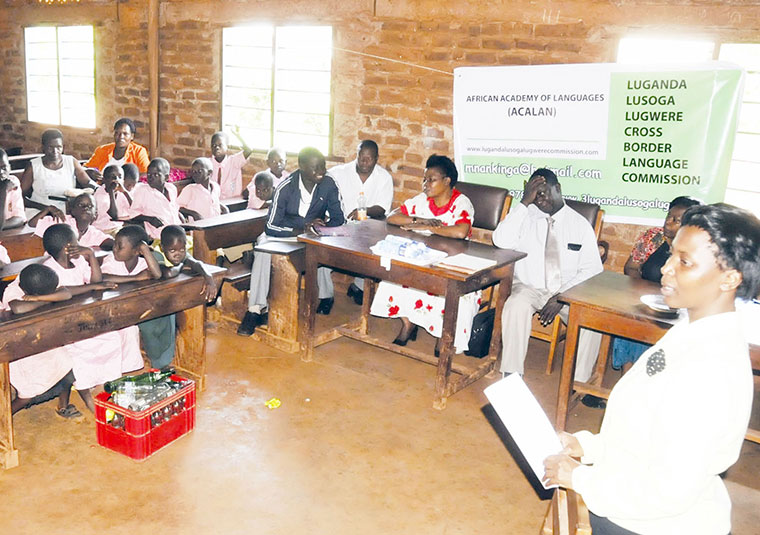 Rcently, cabinet announced that the teaching of Kiswahili in primary and secondary schools shall be made compulsory and an examinable subject. Kiswahili, thus becomes the second official language in the country after English.

This development is not surprising. The cabinet was only approving the implementation of the 21st East African Community (EAC) summit directive making Kiswahili an official language of the community.

What is astonishing perhaps is why it has taken Uganda this long to adopt Kiswahili. To the locals, however, both friendly and unfriendly to Kiswahili, a number of issues have tainted the language hindering its introduction into classrooms.

Wary of these issues, the government has in the past shown little commitment to the language resulting into critical shortage of teachers and teaching materials. Additionally, thanks to the country’s long history of armed confrontations in the 1960s-1980s, Kiswahili has been considered a language for molestation, vandalism, thieving, massive human rights abuses and the enforcement of unjust laws and edicts by armed forces and the police with impunity.

Colonizers and, their successive colonial administrators also often imported Sudanese and other Kiswahili speaking soldiers to pacify the country. Besides, sections of the population have always feared that, both intentionally and unintentionally, Kiswahili would suffocate and eventually annihilate the country’s mother- tongues also known as native languages.

This is understandable for Kiswahili, a blend of Arab and different eastern Africa coastal Bantu languages and dialects, is a very powerful language. It is one of the world’s top 10 most spoken languages and Africa’s most widely used “native” lingua franca.

Kiswahili is taught in hundreds of universities around the world, including in China and in the USA. Recently, the language received new impetus when on November 23, 2021 the United Nations designated July 7 as World Kiswahili Language Day.

German colonial administration (1885-1917) deliberately disparaged and suffocated native languages by adopting Kiswahili as the language of administration and instruction in primary schools in the then Tanganyika territory.

Other European colonial administrators elsewhere in the sub-region intended to do likewise. Independent Tanzania was later to adopt Kiswahili as its national language. Late Dr M B Nsimbi, one of the earliest advocates for the preservation, popularization and revival of native languages and cultures in Uganda, first encountered the impact of Kiswahili language policy in Tanganyika in the mid- 1930s when he volunteered to teach at Tabora School.

Nsimbi was not hostile to Kiswahili, English or on any other foreign language. He believed in multilinguism and indeed studied and mastered Kiswahili which he said assisted him to develop expert proficiency in English and Luganda, his mother-tongue in which he wrote 16 books.

He believed, however, that multilinguism ought to be taught and pursued side by side with mother-tongues. Otherwise, alienating one’s mother-tongue often leads to loss of identity, cultural disconnection and disorientation, and embarrassment.

In 1950 Nsimbi found the Luganda Language Society (Ekibiina Ky’Olulimi Oluganda – EKO) which has been duplicated in other languages and communities such as Busoga. Studies have since shown that, the native language a child gets to hear both before and after birth gives shape to its feelings and thoughts. It also improves critical thinking, learning and literacy skills including the learning of second languages.

Not surprisingly, the United Nations in 1999 designated February 21 as World Mother-Tongue Day, 23 years ahead of denominating the World Kiswahili Language Day. Disparaging native languages is tantamount to erasing a most valuable repository of a peoples’ culture, history, artifacts, ways of life and pride. It could also lead to the extinction of the age-old, yet timeless African wisdom permeated in native proverbs.

The Swahili people themselves say that “suti ya kuazima haistili matako” or “a borrowed garment doesn’t cover/hide nakedness or nudity” meaning it is not fit for the purpose. It is either too long or too shot, too big or too small, too glamorous or too dull in relation to the peoples’ culture and related needs.

It is important, therefore, that as government considers language policies it takes into account mother-tongue learning, if for nothing else to improve the quality of education, and to out from its education system a complete product that is also proud not only of its academic achievements but also of its native language, culture and country.

+6 #1 Lysol 2022-08-03 19:04
One does not need a classroom to lean Kiswahili or Luganda. They are the languages of the street, especially in downtown Kampala.
Report to administrator
0 #2 Norah Owaraga 2022-08-04 16:09
I agree that it is the more important for the focus of government to be on the languages of the first nations of Uganda. When a language disappears an entire culture disappears. Read more of my thoughts of why in fact the alternative official languages should be ours.https://nowaraga.com/2022/07/10/ours-should-b e-the-official-languages-of-uganda/
Report to administrator
0 #3 Akot 2022-08-07 20:45
Lysol, thanks.

ENGLISH is all that Ugandans, need, if they want to develop, be part ot today, tomorrow world!

Tanzania & Kenya have understood how English is so important & not Kiswahili, in business with the rest of the world!

Europeans had to put English on National Education programme, as it gives them chance to business, holiday travels!

Rwandese have understood how English is so important if they are to develop & be part of today world, why not Ugandans?

Many Americans/British are English teachers in Europe!

Where do Uganda tribal languages give them chance to jobs/salaries, even in Uganda?
Report to administrator
0 #4 Lakwena 2022-08-08 08:53
Quoting Lysol:

One does not need a classroom to lean Kiswahili or Luganda. They are the languages of the street, especially in downtown Kampala.

You are on the money Lysol. A forced language is a bad language.

Some of us kids learnt Kiswahili casually in the Police and Prison Barracks. But today in the Armed forces Barracks Kiswahili has been replaced with Runyankole.

But I wonder, which type of Kiswahili will be compulsorily taught? The Kenyan, Tanzanian, Ugandan, the Rwandese/Burundian or the Congolese one?

And, how many Teacher Training Colleges and number of enrollment will satisfy the demand for the thousand of schools; Public and Private?

In other words, it is wishful thinking/pipe dream!
Report to administrator
0 #5 Joe 2022-08-08 19:51
Kiswahili should be retained in the armed forces which is composed of different ethnic groups.

Most soldiers now speak English, but their spouses, not necessarily. You can imagine the confusion if 50+ languages are spoken in an army barracks. English is a scientific language world-over. No problem if it stays as our national language.

Native languages should not die but should not divide us. From Primary 1 - 3, we were taught in our local language. It didn't disadvantage us because we continued to excel at school even in countries that are English-speaking.

I can write and speak by native language fluently. There are some words of wisdom (idioms) in my language (Ateso) that have shaped my character and encouraged me to navigate some tough situations.
Report to administrator
0 #6 Lakwena 2022-08-09 07:33
Quoting Norah Owaraga:

I agree that it is the more important for the focus of government to be on the languages of the first nations of Uganda. When a language disappears an entire culture disappears. Read more of my thoughts of why in fact the alternative official languages should be ours.https://nowaraga.com/2022/07/10/ours-should-be-the-official-languages-of-uganda/

Norah Owaraga, where are you hiding?

In other words, you apparently walked out of Radio One, Friday, Seven O'clock Spectrum Extra Talk Show without saying Goodbye.
Report to administrator