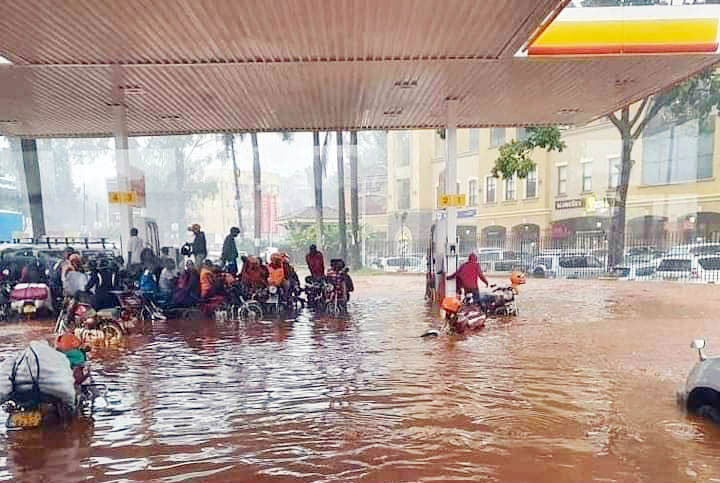 A flooded petrol station in Kampala

Climate change is currently one of the greatest challenges facing all countries worldwide. According to the World Bank, climate change could force about 216 million people to migrate within their own countries by 2050.

Still, this unprecedented migration pattern may emerge as soon as 2030, spreading and intensifying after that. A study by German Watch in 2021 revealed that between 2000 and 2019, about 475,000 people lost their lives due to over 11,000 extreme weather events globally, leading to losses amounting to around $ 2.56 trillion (in purchasing power parities).

In Uganda, climate change has been manifested in rising temperatures, more erratic rainfall, and extreme weather events such as floods and drought. Rainfall has become less predictable, with erratic arrivals and endings of rainfall seasons in recent years.

The individual rainfalls have notably been heavier and more violent; floods and landslides are increasing in intensity, as experienced in most parts of the country in the past year. Additionally, droughts are also on the rise in Uganda, with the western, northern and north-eastern regions experiencing more frequent, severe and longer-lasting droughts than have been seen historically.

These droughts significantly affect water resources, hydroelectricity production and agriculture, among other key economic activities. From the public health perspective, the changing temperature patterns in Uganda have been linked to the increased spread of malaria parasites into additional parts of the country, like the Bukedi-sub region.

Therefore, Uganda’s signs of escalating climate change can no longer be ignored. The Government of Uganda has undertaken several actions to address the pressing climate change including the development of the National Climate Change Policy and its Implementation Strategy in 2015, aimed at ensuring a harmonized and coordinated approach towards a climate-resilient and low-carbon development path for sustainable development in Uganda.

To implement climate actions listed in the Climate Change Policy (2015), the government is expected to commit 30 per cent of national resources, whereas 70 per cent is expected from international sources. The financing needed to respond to climate change by 2030 is approximately $3.9 billion or $258 million per annum. Furthermore, the cost of implementing the country’s first NDC was estimated at $5.5 billion.

According to the National Budget Framework Paper for 2023/2024, the votes mapped under the Natural resources, Environment, Climate Change, Land and Water Management Programme have been allocated a total budget of Shs 547 billion, of which 269 billion is domestic funding and Shs 279 billion is external financing.

The current funding levels are still way below the estimated annual targets. Like many other developing countries, the Covid-19 pandemic has constrained the fiscal space for Uganda, making into more challenging to mobilise the resources for climate change domestically.

There are, however, multiple international sources of climate change funds and instruments available that the government could take advantage of. The United Nations Framework Convention on Climate Change (UNFCCC) provides a framework for the provision of financial resources on a grant or concessional basis, including for transferring technology.

The mechanism has been entrusted to several international entities, for example, the Global Environment Facility with its Special Climate Change Fund, Least Developed Countries Fund, and the Green Climate Fund and Adaptation Fund. To tap into these resources, the government should prioritize capacity building to mobilise climate funds from multiple existing sources.

The need for capacity building in resource mobilization was also stated in Uganda’s requests to the NDC Partnership in 2017. Second, the World Bank Group is currently at the forefront of funding efforts for climate action in developing countries.

In the fiscal year 2022 alone, the Group delivered a record $31.7 billion towards climate action in developing countries, which is a 19% increase from the $26.6 billion in 2021. With support from the Group and the Climate Investment Fund, an Ultra Mega Solar Park in Rewa, Madhya Pradesh, India, was developed. The Delhi Metro Network meets almost 60% of its daytime demand with solar energy generated from the solar park.

In Egypt, the Group supported the establishment of the Benban Solar Park, the country’s first photovoltaic solar park and among the largest solar power plants in the world, stretching over 37 square kilometres, with about six million solar panels.

When fully operational, it is expected to generate over 2,000 megawatts of power, employ 4,000 people, and avoid 2 million tons of greenhouse gas emissions a year. The Uganda government must work closely with global institutions such as the World Bank Group to meet its climate change financing needs.

The writer is a volunteer researcher at EPRC, Makerere University